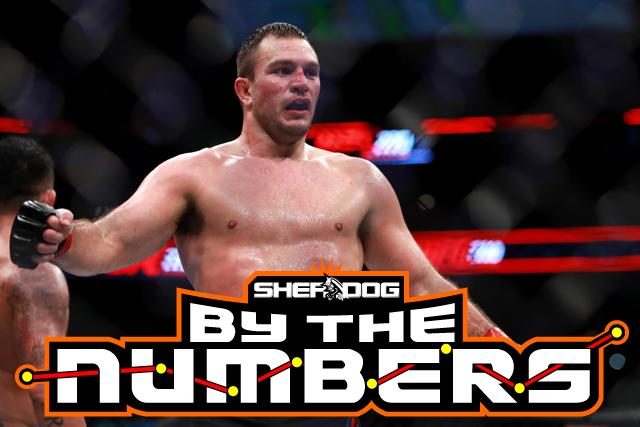 
Gian Villante’s Ultimate Fighting Championship stint has been marred by inconsistency. He is coming off a loss to Sam Alvey and currently has an Octagon record of 6-7. This Saturday, he will have a chance to bounce back from that defeat and further his ledger with a victory over Ed Herman. Expect the two veterans to fight tooth and nail to stay relevant in a competitive light heavyweight division. Here is a by-the-numbers look on the Bellmore Kickboxing Academy standout.

2: Sport athlete in high school. Apart from being a decorated wrestler, he is also an accomplished American football player. Villante was given the Thorpe Award in 2002, being the top player overall, as well as the Bill Piner Award for being the finest linebacker in Nassau County. For his feat, he was included in the High School Heisman All-Star team.

35: Seconds needed to impress spectators in his first professional MMA fight. When he was in college, Villante met and became friends with future UFC middleweight champion Chris Weidman. His was a smooth transition to MMA, as evidenced by his early success.

6: Straight wins to start his professional career. He won the vacant Ring of Combat heavyweight championship. He finished all his opponents, five of them in the first round. In his seventh fight, he dropped to light heavyweight and lost to Demetrius Richards after suffering an arm injury.

8: Fights at ROC before Strikeforce took notice. Villante went 7-1. After his loss to Richards, he challenged Joseph Reyes for the vacant light heavyweight title and won by yet another first-round TKO.

5: Fights in Strikeforce, with a record of 3-2. He defeated Keith Berry, Trevor Smith and Derrick Mehmen. He lost to Chad Griggs and Lorenz Larkin.

2: Rounds needed to beat Cody Donovan in Villante’s second UFC fight. His first was a forgettable one, having lost to Ovince St. Preux via technical decision following an inadvertent eye poke.

1: Round needed to stop reliable veteran, Anthony Perosh. It remains his finest showing in the UFC. Villante starched Perosh in front of Perosh’s countrymen in Melbourne, Australia, at UFC 193.

3: Fight of the Night honors. Villante has received the coveted award three times, having performed to the best of his abilities against Sean O'Connell, Corey Andreson and Saparbek Safarov.

10: Wins by KO or TKO, with four coming in the UFC. Villante is a proven finisher who consistently puts on exciting fights, thanks to his dangerous fists.