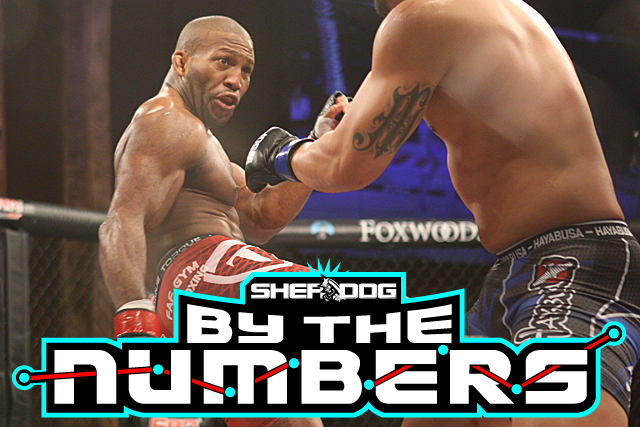 After starting his Professional Fighters League campaign with a stunning submission of Gasan Umalatov, John Howard dropped a unanimous decision to Bruno Santos. On Oct. 20, he will look to erase that setback with nothing less than a decisive victory over Shamil Gamzatov.

They will stand toe-to-toe at the Entertainment and Sports Arena in Washington D.C., and as fans await fight day, here are some numbers that have come to define the resilient veteran they call “Doomsday.”

5: Straight wins to start his professional career. Howard fought in Revere, Massachusetts, and captured the vacant CZ welterweight championship on his fifth bout. All five fights didn’t go the distance.

5: Fights in 2017, his most active year. He shared the cage with the likes of fellow former Ultimate Fighting Championship standouts Dan Miller and Nick Catone. That year, he went 2-3.

3: Fights in Ring of Combat, where he captured its welterweight belt by defeating Charlie Brenneman. On his way to the title showdown, he beat Jose Rodriguez via first round knockout.

14: Fights in the regional circuit before the UFC took notice. On the strength of his impressive performances, which had him winning two titles in different promotions, Howard was tapped by the UFC to make his promotional debut opposite Chris Wilson at UFC 94.

7: Takedowns landed on Wilson. He beat Wilson by split decision in a thrilling match that was picked as Fight of the Night.

31: Total takedowns in the UFC. Throughout his career, Howard has been known to have some decent takedowns. This is impressive as Howard did not have a wrestling background before getting into MMA.

4: Straight victories in the UFC before he ran into Jake Ellenberger, who stopped him in the third round. Howard was winning most of the exchanges on the feet but was battered on the ground, which eventually led to his loss.

3: Consecutive losses after winning four straight. His loss to Ellenberger was followed by defeats to two other top contenders, Thiago Alves and Matt Brown. Howard was then released by the UFC.

4: Consecutive wins after leaving the UFC. Howard first defeated Dennis Olson at CFA 3 before going 3-0 at CES MMA. He won the promotion’s middleweight strap and defended it four times. All three fights ended in a TKO. Following his dominant performances, the UFC got him back.

23: Seconds to knock out Jason Louck for Howard’s third defense of the CES MMA middleweight title. It is his fastest finish to date.

7: Fights in his return to the UFC. He beat quality opponents, such as Uriah Hall, Siyar Bahadurzada and Cathal Pendred.

2: Fights in World Series of Fighting, and went 1-1. He defeated Michael Arrant and lost to Abubakar Nurmagomedov. Then, he went back to CES MMA to fight one more time before getting signed by the PFL.

1: Knockout of the Night award. Howard landed a furious left on a downed Daniel Roberts to stop the clock at 2:01 of the first round in their UFC on Versus 1 encounter.