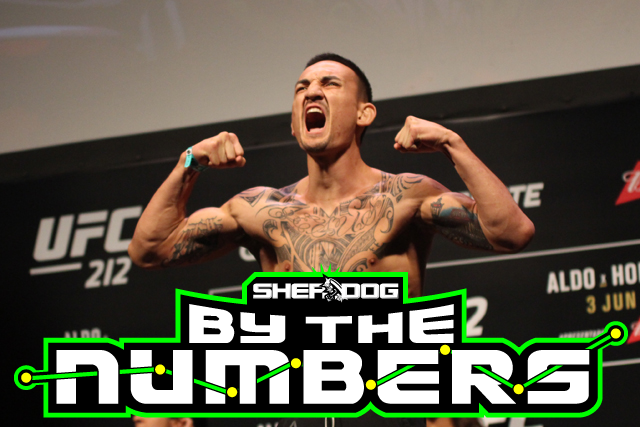 Since losing to Conor McGregor at UFC Fight Night 26, Max Holloway has raked in 12 straight victories, winning the featherweight title and defending it once. On Dec. 8, he will defend it for the second time against No. 1 contender Brian Ortega.

Whose winning streak will come to an end? More importantly, who goes home with the featherweight strap around his waist? As roads lead to the Scotiabank Arena in Toronto, Ontario, Canada, for UFC 231, here is a by-the-numbers look on the ferocious Hawaiian.

4: Wins without a loss to start his professional career. Holloway fought mostly at Hawaii-based promotion X-1, where he defeated World Extreme Cagefighting and Strikeforce veteran Harris Sarmiento, for the lightweight championship.

20: Years old when he made his Octagon debut. Holloway was the youngest fighter on the Ultimate Fighting Championship roster at the time. Stepping up for an injured Ricardo Lamas, “Blessed” faced Dustin Poirier at UFC 143 and lost by mounted triangle armbar in the first round.

3: Straight victories after his inaugural UFC fight. He may have started on the wrong foot but he turned things around by consecutively beating Pat Schilling by unanimous decision, Justin Lawrence by TKO and Leonard Garcia by split decision.

75: Significant strikes as opposed to Dennis Bermudez’s 73, which wasn’t enough for him to salvage the win in their UFC 160 confrontation. According to Fightmetric, Bermudez scored four takedowns, which was pivotal to the outcome of the match.

3: Full rounds with Conor McGregor. Holloway, who replaced an injured Andy Ogle, was dominated by the Irishman, who dealt him the third loss of his career.

3: Rounds to beat Anthony Pettis by TKO and claim the interim featherweight title. In a bout where Pettis missed weight, Holloway answered his opponent’s best kicks with some of his own, with the best ones ending the fight at 4:50 of round 3. With the triumph, Holloway became the first American to win the featherweight championship.

278: Total strikes landed on Jose Aldo in their two fights, according to Fightmetric. Aldo, on the other hand, could only land 142. Holloway TKOd The Brazilian in the third round of their UFC 212 encounter to snatch the featherweight belt. When they rematched at UFC 218, he successfully defended the belt by forcing the same outcome, also in the third round.

1: Knockout of the Night award. He earned his first post-fight bonus with a TKO victory over Will Chope at UFC Fight Night 34. The end came at 2:27 of round 2.

3: Performance of the Night awards. He knocked out Akira Corassani at UFC Fight Night 53, choked out Cub Swanson at UFC on Fox 15 and TKO’d Pettis at UFC 206.

1 Fight of the Night award. His violent finish of Aldo in their first meeting earned him an extra $50,000. In all, Holloway has earned $250,000 in post-fight bonuses.