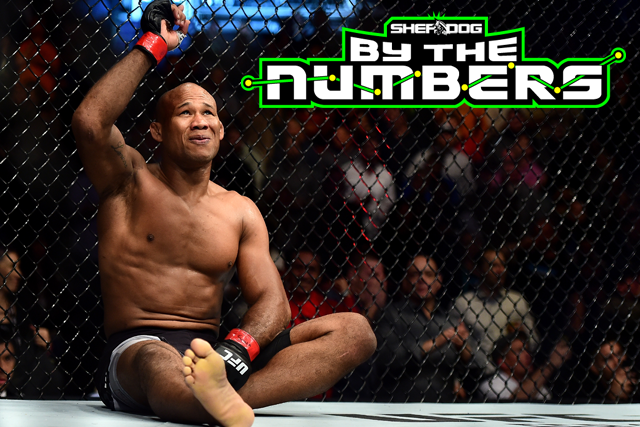 Ronaldo “Jacare” Souza is a title-hungry veteran looking to get back on track after dropping a split decision to Kelvin Gastelum. This weekend, he will have an opportunity to start a new streak when he faces No. 3-ranked Chris Weidman.

Both are on the brink of title contention, so expect nothing less than fireworks when they collide at UFC 230. As they prepare to grace the historic Madison Square Garden, learn more about “Jacare” through these impressive numbers:

17: Years old when he started training in judo and jiu-jitsu. Souza went on to become an eight-time world jiu-jitsu champion and one of the best grapplers in MMA. He won the ADCC multiple times, and at the 2005 ADCC absolutes, he finished as runner-up to Roger Gracie, who outweighed him by around 25 pounds. The two jiu-jitsu fighters are considered to be among the best the sport has ever seen.

1: Minute lasted in his first professional MMA fight where he lost to Jorge Patino at Jungle Fight 1. The end came at 3:13, when Patino knocked him out with a solid punch.

10: Straight victories after that loss. The long stretch of triumphs included stints in Jungle Fight, Dream, Gracie Fighting Championships and Amazon Challenge. He fought future stars such as Alexander Shlemenko and Jason Miller.

6: Losses in his career. Apart from Patino, his losses came at the hands of Gegard Mousasi, Luke Rockhold, Yoel Romero, Robert Whittaker and Kelvin Gastelum.

2: Fights with Mousasi. Souza lost to the Armenian by first-round knockout in the final round of the Dream middleweight grand prix. Souza got back at him via guillotine choke at UFC Fight Night 50.

2: Fights with Derek Brunson. He finished Brunson twice, first at Strikeforce “Rousey vs. Kaufman” and then at UFC on Fox 27. Both fights ended in the first round.

2: Main events in the Ultimate Fighting Championship. His bouts with Brunson and Mousasi were both headliners.

8: Fights in Strikeforce, and lost only once. After going 2-0, he was given a shot at the vacant middleweight title, beating Tim Kennedy by unanimous decision. He defended it successfully against Robbie Lawler but lost it to Luke Rockhold.

14: Wins by submission. He has tapped out opponents by triangle choke, armbar, arm triangle, rear-naked choke, guillotine choke and kimura. His armbar of Chris Camozzi at UFC on Fox 15 earned him Submission of the Night honors.

13: Takedowns in the UFC, per Fightmetric. His most was four, which was against Mousasi. Outside of the UFC, he scored eight takedowns on Joey Villasenor and six on Bristol Marunde.

4: Countries in which he competed in. Apart from the United States and Brazil, he has also fought in Japan and Slovenia.