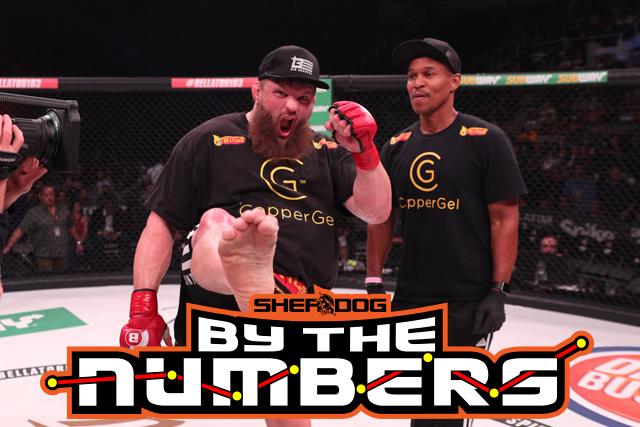 Roy Nelson started his Bellator MMA stint on a good note by defeating Javy Ayala. However, Matt Mitrione dealt him his first defeat with the promotion. This weekend, “Big Country” will try to bring back that lost shine when he faces Sergei Kharitonov in the co-main event of Bellator 207 in Uncasville, Connecticut.

15: Years old when he started training Shaolin kung fu, one of the oldest and most popular styles in all of traditional martial arts.

14: Years as a professional mixed martial artist. He debuted on April 2004 in a regional tournament called Rage on the River.

2: Fights in one night to start his professional career. He won twice to win the Rage on the River heavyweight tournament. This was followed by four more wins before he bowed to Josh Curran at BodogFight: “Clash of Nations.”

1: Round needed to dispose of Vincent Lucero in Nelson’s International Fight League debut.

7: Fights in IFL and went 6-1. Nelson was a certified star in the now-defunct promotion.

3: Fellow contestants defeated at “The Ultimate Fighter: Heavyweights.” He TKOd Kevin Ferguson, decisioned Justin Wren and TKOd James McSweeney to set the stage for a finals match with Brendan Schaub, whom he knocked out inside one minute to win the show.

19: Fights in the UFC and went 9-10. He has notable wins over Mirko Filipovic, Antonio Rodrigo Nogueira, Cheick Kongo and Antonio Silva.

13: First-round finishes in his entire professional career, three of which came inside the first minute. In the UFC, he made quick work of six opponents.

4: Knockout of the Night awards. He starched Schaub, Kongo, Stefan Struve and Dave Herman to take the coveted fight bonus.

6: Rounds so far at Bellator. Nelson went three full rounds with Ayala and Mitrione. He had previously beaten the latter at the finale of “TUF 16.”