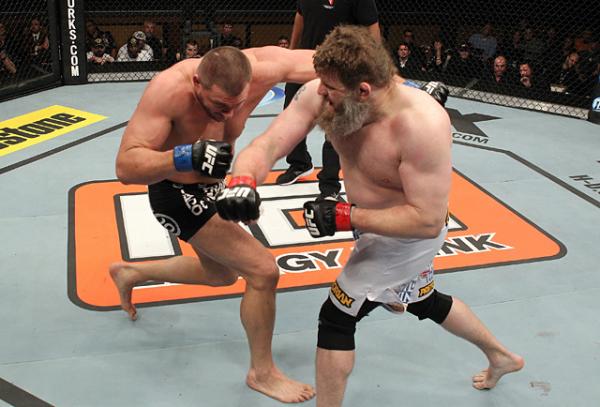 
If Roy Nelson truly is just barely starting to get the hang of this striking thing, the rest of the heavyweight division should take note. “Big Country” scored his fifth win by knockout or technical knockout in the UFC, stopping fellow “TUF 10” alumnus Matt Mitrione with strikes in the opening round at “The Ultimate Fighter 16” finale in Las Vegas on Saturday night. While Nelson kept his career rolling, Colton Smith got his started in impressive fashion, as the Army Ranger upset the favored Mike Ricci to win the “TUF 16” welterweight tournament and the UFC contract that goes with it.

Meanwhile, another international iteration of “The Ultimate Fighter” came to a head at UFC on FX 6 on Friday night. U.K. coach Ross Pearson showcased his boxing in scoring a third-round TKO victory over Australia leader George Sotiropoulos in the evening’s main event at the Gold Coast Convention Center in Gold Coast, Queensland, Australia, while “TUF: Australia vs. the U.K.” competitors Norman Parke and Robert Whittaker earned UFC contracts for victories over Colin Fletcher and Brad Scott, respectively. Additionally, Hector Lombard re-established himself as a force to be reckoned with by stopping Rousimar Palhares with strikes in another featured contest.

Here is a by-the-numbers look at the “TUF 16” finale and UFC on FX 6, with statistics courtesy of FightMetric.com.

5-0: Record in UFC bouts that end via knockout or technical knockout for Roy Nelson, who stopped Matt Mitrione with strikes at 2:58 of the opening round on Saturday. Of those five victories, four have come inside of a round.

23: Significant strikes landed by Nelson, the most he has landed in any of his first-round triumphs in the UFC. “Big Country” landed eight strikes against Brendan Schaub, nine against Stefan Struve and two against Dave Herman -- his previous first-round victories in the Las Vegas-based promotion.

6: Consecutive appearances on free UFC shows by Pat Barry. The kickboxer began his streak on Jan. 22, 2011 with a unanimous decision win over Joey Beltran at “Fight for the Troops 2.” His last appearance on a pay-per-view card came at UFC 115, when he lost to Mirko "Cro Cop" Filipovic via rear-naked choke.

1,449: Days since Barry posted back-to-back wins in the cage. On Dec. 27, 2008, “HD” defeated Dan Evensen in his Octagon debut for his fourth consecutive MMA win. He has not won two fights in a row since then.

106: Significant strikes by which Johnny Bedford has outlanded his first two UFC opponents, Louis Gaudinot and Marcos Vinicius. “Brutal” outlanded Vinicius 34-to-4 on Saturday night en route to a second-round TKO triumph. He held an 82-to-6 edge in significant strikes against Gaudinot at the “TUF 14” finale.

5: Takedowns landed in six attempts by Rustam Khabilov in his victory over Vince Pichel. The debuting Russian suplexed Pichel to the canvas three times, with the last slam setting up his first-round TKO finish.

4: Submission attempts by T.J. Waldburger during his 6:04 of Octagon time with Nick Catone. Waldburger, who ranks first in the UFC in submissions attempted per 15 minutes, finished the fight with a triangle choke in the second round.

10:55: Difference between Hugo Viana’s average fight time for his first six professional bouts (15:00) and the time it took him to knock out Reuben Duran (4:05) in their bantamweight clash on Saturday. “Wolverine” had gone the distance in each of his first six pro fights. 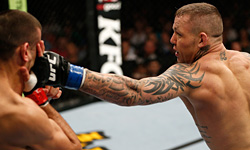 1: Takedowns landed, in 19 attempts, during Sotiropoulos’ current three-fight skid. During a seven-fight winning streak to begin his UFC career, the Australian lightweight averaged 2.14 takedowns landed per contest. Sotiropoulos was successful on one of six takedown attempts versus Pearson.

413: Total strikes thrown by Robert Whittaker and Brad Scott in their welterweight clash. Whittaker outlanded his opponent 35-to-19 in round one and 37-to-21 in round three to earn a unanimous nod and became the “TUF: Australia vs. the U.K” 170-pound winner.

6: Takedowns landed in 9 attempts by Norman Parke in his decision triumph over Colin Fletcher in the “TUF: Australia vs. the U.K” 155-pound final. Parke took down “Freak Show” two times in each round and passed guard seven times in the victory.

24: Significant strikes landed by Hector Lombard in his first round TKO win over leg lock specialist Rousimar Palhares, just two less than he landed during the entirety of his 15-minute decision loss to Tim Boetsch at UFC 149.

19: Wins via first-round stoppage for Lombard. Seven of those triumphs have come in less than a minute.

0: Submissions attempted in 10 bouts on Friday’s UFC on FX 6 card. Half of the evening’s contests went the distance, while the other five ended via knockout or technical knockout. As a result, no “Submission of the Night” bonus was awarded.