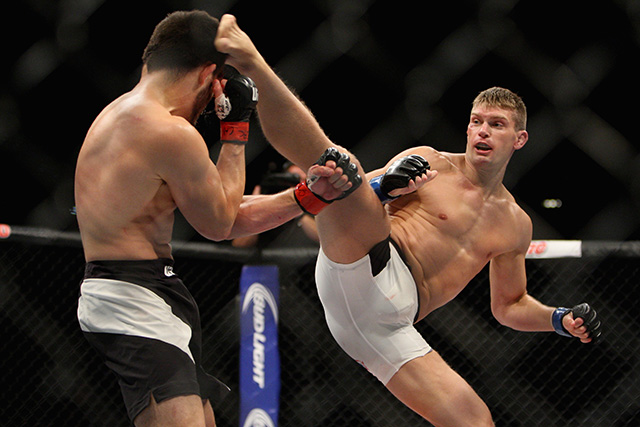 
Stephen Thompson is developing into an intriguing welterweight contender.

The former kickboxing standout earned the most significant victory of his career to date on Sunday night, as he knocked out heavy-handed wrestler Jake Ellenberger with a spinning hook kick 4:29 into the first round of their “The Ultimate Fighter 21” finale headlining bout at the MGM Grand Garden Arena in Las Vegas.

Thompson’s finish provided a fitting end to a weekend that featured more than its share of violent highlights. Here is a by-the-numbers look at “The Ultimate Fighter 21” Finale, with statistics courtesy of FightMetric.com.

5: Consecutive wins for Thompson, the second longest active streak in the welterweight division behind only Neil Magny (seven).

3: Combined knockdowns landed by Thompson (two) and Ellenberger (one). “Wonderboy” floored his opponent twice with spinning hook kicks, while Ellenberger dropped Thompson with a left hook in the abbreviated clash.

2-4: Record since 2013 for Ellenberger, who prior to his recent skid won eight of his first 10 Octagon appearances and was regarded as a top welterweight contender. Ellenberger has been finished in three of those four defeats.

$300,000: Prize money awarded to the Blackzilians team as a result of Kamaru Usman’s submission of American Top Team’s Hayder Hassan to win “The Ultimate Fighter 21.” Hassan tapped to an arm-triangle 1:19 into round two.

7: Takedowns landed, in 10 attempts, by Michael Graves, the most of anyone at the “TUF 21” finale. Graves’ efforts helped earn him a unanimous decision triumph over Vicente Luque in their welterweight clash.

5-2: UFC record for Jorge Masvidal at lightweight. “Gamebred” made his Octagon debut at 170 pounds on Sunday against Cezar Ferreira, winning via knockout 4:22 into round one.

3: First-round KO/TKO defeats in the UFC for Ferreira. In addition to Masvidal, “Mutante” was also stopped in the opening frame by Sam Alvey (UFC Fight Night “Bigfoot vs. Mir”) and C.B. Dolloway (UFC Fight Night “Shogun vs. Henderson”).

83: Total strikes by which Michelle Waterson outlanded Angela Magana in her UFC debut. The Jackson-Wink MMA product outlanded her opponent 23 to 13 in round one, 44 to 5 in round two and 35 to 1 in round three before finishing the fight via rear-naked choke 2:38 into the final stanza.

4: Submission attempts by Waterson. “The Karate Hottie” attempted at least one submission in each round before eliciting the tap from Magana in round three.

9: Guard passes executed by Waterson. After surviving a Magana armbar in the first frame, the former Invicta FC champion dominated the positional battle for the rest of the bout.

4: Significant strikes landed by Blanco in victory. By comparison, Blanco landed 132 significant strikes in a decision triumph over Daniel Hooker in his last outing at UFC Fight Night “Hunt vs. Nelson” last September.

149: Total strikes landed by Smith. By comparison, Miller landed just 29. Smith was especially dominant in rounds two and three, when he outlanded his opponent 113 to 9.

71: Total strikes by which George Sullivan outlanded Dominic Waters in his unanimous decision victory. Sullivan, who also held a 54-to-13 edge in significant strikes, outlanded Waters 45 to 9 in round one and 38 to 2 in round two.

3: 30-25 scorecards submitted during Sunday’s event. Patricia Morse Jarman submitted a 30-25 tally for Sullivan in his win over Waters, while Junichiro Kamijo and Chris Lee awarded 30-25 scores to Smith in his victory against Miller