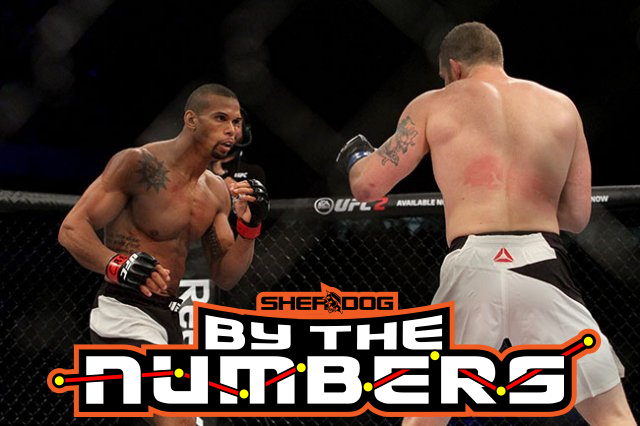 Thiago Santos is one of the biggest knockout threats at middleweight today. He knows that competition gets tougher as he inches closer to the top 10, and this weekend, he will face a late replacement in Eryk Anders. The two highly-touted competitors will square off at Geraldo Jose de Almeida Gymnasium in Sao Paulo at UFC Fight Night 137. Let these numbers show why the Brazilian spells serious trouble at 185.

8: Wins and one loss before joining “The Ultimate Fighter: Brazil 2,” fighting mostly in Rio de Janeiro. His lone defeat came at the hands of future UFC welterweight, Vicente Luque.

2: Wins at “TUF Brazil 2.” Santos was the last pick, but showed during the tournament that he deserved better as he reached the quarterfinals. He defeated Gil Freitas and Pedro Irie before losing to eventual season winner, Leonardo Santos.

53: Seconds to beat Ronny Markes in Santos’ second UFC bout. He clobbered Markes with kicks and punches to earn a stoppage early in the first round at UFC Fight Night 38.

3: Full rounds with Uriah Hall in a back-and-forth battle that saw the fight going in the American’s favor. According to Fightmetric, Santos was slightly ahead in the significant strikes department, 44-42. Hall, however, had one takedown and one submission attempt.

2: Four-fight winning runs in the UFC. After the loss to Hall, he won four straight over Andy Enz, Steve Bosse, Elias Theodorou and Nate Marquardt. He then suffered two straight losses before surging with another four consecutive wins. His victims include Jack Marshman, Gerald Meerschaert, Jack Hermansson and Anthony Smith.

2: Performance of the Night awards. His head kick knockout of Bosse and spinning heel kick/punches TKO of Hermansson with one second left in the round made him $50,000 richer twice over.

1: Fight of the Night award. At UFC Fight Night 125, Santos faced a gritty “Lionheart” Smith. They engaged in a high-action first round that had Santos suffer a big cut. In round 2, he landed a kick flush to his opponent’s liver and then pummeled him with punches to end the fight.

12: Finishes by strikes. Santos is tied with Anderson Silva for the most KO/TKO stoppages in middleweight history.