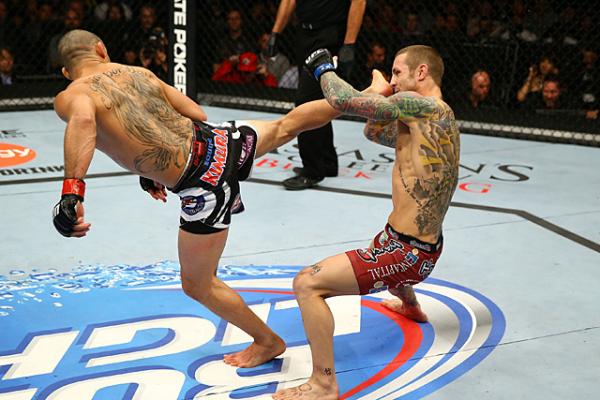 Renan Barao is 8-0 under the Zuffa banner. | Photo: Al Bello/Zuffa/UFC/Getty


Alexander Gustafsson took Jon Jones to brink of defeat, and the reigning light heavyweight king responded appropriately. Buoyed by resilience and a versatile toolbox of attacks, “Bones” captured a hard-fought unanimous decision against his Swedish opponent in the UFC 165 headliner at the Air Canada Centre in Toronto on Saturday night.

Unlike his previous five title defenses, this one was very much in doubt. Gustafsson landed solid combinations, resisted takedowns and never wilted in the face of his adversary’s diverse offensive arsenal. Still, it was not enough to wrest the belt from the champion. Though the bumps and bruises incurred during the competitive scrap sent the Jackson’s MMA product to the hospital, Jones’ reputation can only benefit from overcoming such a game and dangerous challenger. With a memorable bout comes plenty of opportunity for statistical review and reflection. Here is a by the numbers look at UFC 165, with statistics courtesy of FightMetric.com.

.620: Significant striking accuracy for Jones, who landed 134 of 217 attempts. By comparison, Gustafsson landed 110 of 288 significant strikes, a 38 percent rate.

53: Strikes to the legs landed by Jones. By comparison, Gustafsson landed 15 leg strikes. “Bones” landed more leg strikes than his foe in every frame.

0: Ground strikes attempted by both fighters.

1: Takedown landed, in eight attempts, by Gustafsson. While not a spectacular success rate, the Swede became the first person to take Jones down in UFC competition. Additionally, the Alliance MMA product successfully defended 10 of Jones’ 11 takedown attempts.

10: Consecutive UFC triumphs for Jones. He joins Anderson Silva, Georges St. Pierre and Royce Gracie as the only competitors to win that many fights in a row.

6: Light heavyweight title defenses for Jones, the most in the history of the division. With his unanimous decision win over Gustafsson, “Bones” moved past Tito Ortiz into sole possession of first place. Jones has also beaten Quinton Jackson, Lyoto Machida, Rashad Evans, Vitor Belfort and Chael Sonnen during his reign.

6: Finishes by knockout, technical knockout or submission for Renan Barao, the second most for a bantamweight fighter competing under the Zuffa banner. Former WEC 135-pound ruler Brian Bowles owns six such victories. The interim bantamweight king became the third person in organization history to win via spinning back kick KO when he stopped Eddie Wineland with the move 35 seconds into round two.

.210: Significant striking accuracy for Eddie Wineland in the abbreviated encounter. By comparison, Barao landed 62 percent of his significant strikes.

1: D’arce choke submission victories by heavyweights in UFC history. Brendan Schaub became the first big man to secure the maneuver when he tapped out Matt Mitrione 4:06 into the first round of their featured bout.

5: Takedowns landed, in five attempts, by Francis Carmont in his lopsided unanimous decision triumph over Costa Philippou. In his previous three wins, Philippou had successfully thwarted 22 of 24 takedown attempts from his opponents.

74: Total strikes by which Carmont outlanded Philippou. “Limitless” controlled each frame, outlanding his foe 25 to 7 in round one, 27 to 2 in round two and 37 to 6 in round three.

14: Guard passes by Carmont. The Tristar Gym representative spent the majority of the middleweight scrap in top position, passing guard a total of 11 times in rounds two and three combined.

21: Consecutive wins to begin the professional career of Khabib Nurmagomedov, who made his debut in 2008. “The Eagle” is now 5-0 in the UFC after taking a decision from Strikeforce veteran Pat Healy.

4: Takedowns landed in six attempts for Wilson Reis, who upset Ivan Menjivar to win his Octagon debut. Reis also held a 33-to-29 advantage in significant strikes, including an 11-to-3 edge in the final frame.

1-4: Record for Menjivar in UFC and WEC bouts that go the distance. In those five bouts, “The Pride of El Salvador” has surrendered a total of 16 takedowns while landing none himself.

9: Victories via choke for Mitch Gagnon, who rendered Dustin Kimura unconscious with a guillotine 4:05 into the first round of their bantamweight encounter. Six of those submissions were guillotine chokes.

9: Professional bouts for Daniel Omielanczuk in 2012. The Polish heavyweight had his first fight of 2013 against Nandor Guelmino on Saturday, winning by knockout in the third frame. Omielanczuk was 9-0 in 2012, earning eight of those triumphs by submission.