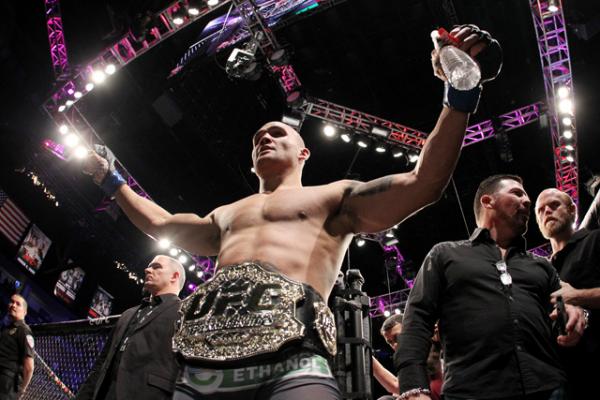 
Robbie Lawler is finally a Ultimate Fighting Championship champion. Some would say it’s been a long time coming.

The American Top Team product fought in calculated bursts to capture a contentious split decision triumph over Johny Hendricks in the UFC 181 headliner at the Mandalay Bay Events Center in Las Vegas on Saturday night. With the win, “Ruthless” avenged a split-decision defeat to Hendricks at UFC 171 this past March. Considering the close nature of the verdict, a trilogy could be in store.

Lawler was not the night’s only star, however. Returning from a 15-month layoff, Anthony Pettis re-established himself as the world’s top lightweight with a second-round submission of Gilbert Melendez in the evening’s co-main event. It was the Roufusport standout’s first 155-pound title defense since winning the belt against Benson Henderson at UFC 164.

With two title fights in the books, there are plenty of facts and figures to examine. Here is a by-the-numbers look at UFC 181, with statistics courtesy of FightMetric.com.


4,593: Days since Lawler made his Octagon debut, a unanimous decision victory over Aaron Riley at UFC 37. He took an extended hiatus from the promotion following a loss to Evan Tanner at UFC 50 on Oct. 22, 2004.

1: UFC championship won by a fighter representing American Top Team. With his win over Hendricks, Lawler became the first fighter to win a belt for the Coconut Creek, Fla.,-based camp.

39: Significant strikes to the legs landed by Hendricks. Lawler, meanwhile, did not land a single leg kick in the fight.

45: Significant strikes to the body landed by Lawler. By comparison, Hendricks landed six.

12: Takedowns defended by Lawler. Hendricks landed just five of his 17 takedown tries on the evening.

45: Takedowns landed by Hendricks in his UFC career. His five takedowns landed moved him past Demetrious Johnson (41) and Demian Maia (43) into sixth place into promotion history.

4: Consecutive finishes for Pettis, tying him with Max Holloway and Ronda Rousey for the longest active streak in the UFC. In addition to Melendez, Pettis has stopped Benson Henderson, Donald Cerrone and Joe Lauzon in succession.

25/4,443: Fights and days that Melendez went without being finished in his professional MMA career. In his 26th professional fight, “El Nino” tapped to a mounted guillotine from Pettis in the second round of their lightweight title fight.

8:27: Total time spent in the Octagon by Pettis over the past three years prior to UFC 181. The Roufusport star was sidelined by numerous injuries as well as a coaching stint on “The Ultimate Fighter 20.” Pettis last appeared 15 months ago, when he submitted Benson Henderson to capture the lightweight title at UFC 164.

27: Total strikes by which Melendez outlanded Pettis in the first round. Melendez used constant pressure to outland his foe 49-22 in the opening stanza. However, “Showtime” outlanded Melendez 21-10 in the second frame before securing the fight-ending submission.

36: Age, in years, of former WWE champion CM Punk, whom the UFC announced it signed to a multi-fight contract during the UFC 181 broadcast. Punk, whose given name is Phil Brooks, expects to compete at middleweight or welterweight in the Octagon.

6: First-round KO/TKOs for Travis Browne in the Octagon. That ties him with Andrei Arlovski, Roy Nelson and Cain Velasquez for most in UFC heavyweight history. Browne stopped Brendan Schaub with punches from back mount 4:50 into the initial stanza.

30: Total strikes by which Browne outlanded Schaub. The Hawaiian most notably held a 22-to-0 edge in significant ground strikes against his opponent.

4: Recorded finishes in less than one minute for Todd Duffee, who knocked out Anthony Hamilton 33 seconds into their heavyweight encounter. Duffee, of course, famously put Tim Hague away seven seconds into his Octagon debut at UFC 102. Overall, the 29-year-old has finished all but one of his nine career triumphs inside of a round.

12: Combined significant strikes landed by Duffee in his wins over Hamilton and Hague.

14: Finishes for Urijah Faber in UFC and World Extreme Cagefighting competition, tying him with Anderson Silva for No. 1 all-time. “The California Kid” capitalized on an inadvertent eye-poke to tap out Francisco Rivera with a rear-naked choke 1:34 into the second round of their bantamweight clash.

13: Submissions in UFC and WEC competition for Faber, tying him with Antonio Rodrigo Nogueira for most submissions in UFC/WEC/Pride Fighting Championships/Strikeforce history. His victory over Rivera moved him past Kazushi Sakuraba and into a tie for first place.

7: Takedowns landed, in 13 attempts, by Corey Anderson in his unanimous decision triumph over Justin Jones. “The Ultimate Fighter 19” alum landed at least two takedowns in each round in the light heavyweight contest.

300: Number of events held by the UFC following the conclusion of UFC 181 on Saturday night. The Las Vegas-based promotion has held 44 events thus far in 2014 alone, with three more on tap before the year concludes.