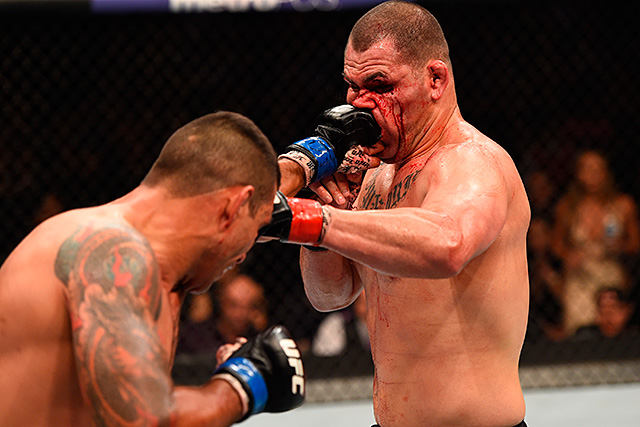 
Not only is Fabricio Werdum the Ultimate Fighting Championship’s current undisputed heavyweight champion, but he now has a legitimate claim to being the greatest of all time.

Werdum submitted Cain Velasquez with a guillotine choke 2:13 into the third round of the UFC 188 headliner in Mexico City on Saturday night to unify the promotion’s heavyweight title. Now, the Brazilian known as “Vai Cavalo” owns a holy trinity of victories in his professional mixed martial arts career, as he has beaten Velasquez, Fedor Emelianenko and Antonio Rodrigo Nogueira -- all via submission.

On such a historic evening, there are plenty of facts and figures to review. Here is a by-the-numbers look at UFC 188, with statistics courtesy of FightMetric.com.


6: Consecutive victories for Werdum, tying him with Andrei Arlovski for the longest active winning streak in the division.

79: Significant strikes to the head landed by Werdum. By comparison, Velasquez landed 54.

3: Brazilian champions in the UFC: Werdum, Rafael dos Anjos and Jose Aldo. Two others, Bethe Correia and Renan Barao, will challenge for gold later in 2015.

9-1: Record for Werdum since he was cut by the UFC in 2008. During that time, he has posted victories over Antonio Silva, Emelianenko, Roy Nelson, Nogueira, Travis Browne, Mark Hunt and Velasquez.

4: Takedowns landed, in five attempts, by Velasquez. The last takedown proved fatal, however, as Werdum was able to instantly turn it into the fight-ending guillotine choke. Werdum landed one of three takedown attempts.

33: Career takedowns landed by Velasquez, most in UFC heavyweight history. Randy Couture is second with 25.

1,374: Total strikes landed by Velasquez in his career, the most in UFC heavyweight history (Cheick Kongo is No. 2 at 1,025) and No. 6 among active fighters overall. Velasquez landed 117 total strikes against Werdum.

668: Career significant strikes landed by Velasquez, No. 2 among all UFC heavyweights behind only Junior dos Santos (708).

602: Days since Velasquez’s last Octagon appearance, a bludgeoning of Junior dos Santos that ended in the fifth frame at UFC 166.

3: Takedowns landed, in 11 attempts by Alvarez. The Blackzilians representative took Melendez down once in round two and twice in round three.

1-5: Record for Nate Marquardt since he defeated Tyrone Woodley for the Strikeforce welterweight title in 2012. The 36-year-old Colorado native lost via TKO to Kelvin Gastelum after he retired on his stool prior to the third round of their middleweight scrap. It was Marquardt’s third loss via KO/TKO during his current skid.

102: Total strikes by which Gastelum outlanded Marquardt. Gastelum held an 80-to-7 edge in total strikes during the second stanza.

1: Takedown landed, in 15 attempts, by Henry Cejudo against Chico Camus in their flyweight bout. The 2008 Olympic gold medalist in freestyle wrestling was nonetheless able to outwork his foe to capture a unanimous verdict. Cejudo landed six takedowns in his previous victory against former title challenger Chris Cariaso.

2,093: Days since Efrain Escudero last earned consecutive wins in the Octagon, when he bested Cole Miller and Phillipe Nover in his first two promotional appearances in 2008-09. “The Ultimate Fighter 8” alum defeated Drew Dober with a first-round guillotine choke at UFC 188, a victory which followed a decision triumph over Rodrigo Goiana de Lima at UFC Fight Night in February in February.

.560: Significant striking accuracy for Gabriel Benitez, who landed 60 of 106 attempts in winning a unanimous decision over Clay Collard. Collard, meanwhile, connected on just 34 of 158 significant strike attempts, a 21 percent clip.