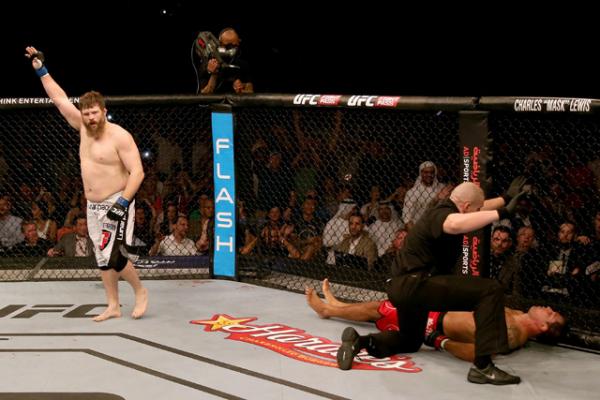 Antonio Rodrigo Nogueira learned that lesson the hard way, falling to “Big Country” via knockout 3:37 into the opening round of their UFC Fight Night 40 headliner at Du Arena in Abu Dhabi, United Arab Emirates, on Friday. With the victory, Nelson halted a two-fight skid and once again demonstrated that he might be the most dangerous heavyweight in the sport in the first five minutes of a fight. Meanwhile, Nogueira is left to ponder his future after a devastating loss.

Here is a by-the-numbers look at UFC Fight Night 40, with statistics courtesy of FightMetric.com.

6: First-round knockouts in UFC competition for Nelson, the third most in promotion history. Only Vitor Belfort (nine) and Anderson Silva (seven) have more. In addition to Nogueira, “Big Country” has stopped Cheick Kongo, Matt Mitrione, Dave Herman, Stefan Struve and Brendan Schaub inside of a round.

7: Knockout victories in the Octagon for Nelson, which includes his six first-round stoppages as well as a third-round TKO win against Mirko Filipovic at UFC 137. That ties him with Gabriel Gonzaga, Andrei Arlovski and Junior dos Santos for second-most in UFC heavyweight history.

45: Professional bouts completed by Nogueira before the Brazilian suffered back-to-back losses. Before suffering a knockout loss to Nelson, “Minotauro” was submitted by Fabricio Werdum at UFC on Fuel TV 10 in his most recent outing last June.

5: Losses in which Nogueira has been stopped by either knockout or submission in the Octagon since December 2008. In his first 37 pro fights, which spanned from June 12, 1999 to Feb. 2, 2008, the Brazilian was never stopped in an MMA bout.

1,462: Days since the UFC last touched down in Abu Dhabi. UFC 112 “Invincible” took place at the Ferrari World Concert Arena on April 10, 2010 and saw Anderson Silva defend his middleweight crown with a unanimous decision over Demian Maia in the evening’s main event, while Frankie Edgar captured a controversial decision to win lightweight gold against B.J. Penn in the co-headliner.

8: Bouts on Friday’s UFC Fight Night 40 bill, the second time in 2014 that a card held by the Las Vegas-based promotion held eight fights. The last time that occurred was in 2007, when both UFC 72 and UFC Fight Night 8 featured eight bouts.

5: Takedowns landed, in nine attempts, by Clay Guida, according to unofficial live statistics. That would give “The Carpenter” 56 for his career, moving him past Karo Parisyan and Randy Couture into fourth place on the promotion’s all-time list.

4: Decision victories in as many UFC appearances for Ryan LaFlare, who outpointed John Howard on Friday. The Blackzilians member also owns three-round triumphs over Ben Alloway, Santiago Ponzinibbio and Court McGee in the Octagon.

5-4-1: Record for Polish heavyweight Daniel Omielanczuk in bouts that go the distance after dropping a three-round verdict to Jared Rosholt. Omielanczuk is 11-0 in all other bouts.

1,819: Days since Thales Leites challenged Anderson Silva for the middleweight title at UFC 97. Leites lost a five-round verdict to “The Spider” in Montreal on April 18, 2009. Leites is 9-2 since that defeat, including his first-round TKO of Trevor Smith on Friday.

.130: Percentage of Leites’ 23 professional victories that have come via knockout or technical knockout after the Brazilian stopped Smith with punches 45 seconds into their middleweight encounter. Leites’ other two TKO triumphs came in 2005 against Ronald Jhun (doctor stoppage) and in 2004 against Lucio Linhares (corner stoppage).