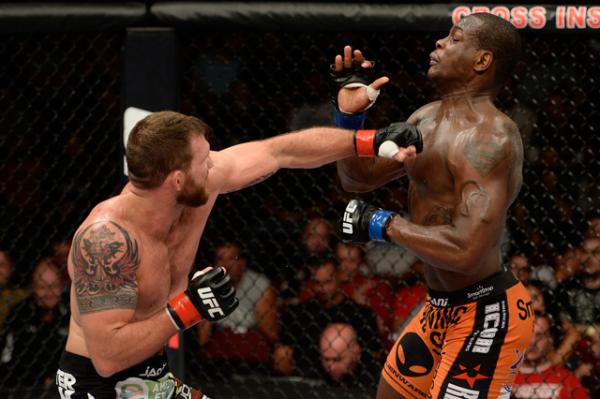 It’s back to the drawing board for the hyped St. Preux, who suffered his first defeat in five Octagon appearances. Bader, meanwhile, cemented his reputation as one of the light heavyweight division’s sturdiest gatekeepers. Here is a by-the-numbers look at UFC Fight Night “Bader vs. St. Preux,” with statistics courtesy of FightMetric.com.


9: Takedowns landed, in 21 attempts, by Bader, a career high for the Power MMA representative. Bader landed at least one takedown in each frame to hand St. Preux his first UFC defeat. St. Preux had not been taken down at all in his first four UFC appearances.

790: Total strikes landed by Bader in his UFC tenure, No. 8 among light heavyweights and just behind Mauricio Rua (798). Bader held a 77-to-30 edge in total strikes against St. Preux.

25:00: Octagon time for St. Preux against Bader, 3:41 longer than the rest of his appearances combined.

784: Days since Gray Maynard’s last win in UFC competition, a split-decision triumph over Clay Guida at UFC on FX 4. Maynard was stopped by Ross Pearson 1:35 into the second round of their lightweight duel on Saturday.

3: Consecutive KO/TKO losses in the Octagon for Maynard, who has fallen to Pearson, Nate Diaz and T.J. Grant in devastating fashion. Overall, “The Bully” has been knocked out in four of his last five fights, including a fourth-round KO loss to Frankie Edgar at UFC 136.

34: Career takedowns landed by Gray Maynard, No. 7 all-time among UFC lightweights. “The Ultimate Fighter 5” alum landed two takedowns against Pearson to move ahead of Sean Sherk on the 155-pound list. Khabib Nurmagomedov is No. 5 with 35 takedowns landed.

52: Approximate distance, in miles, from Lincolnville, Maine, where Tim Boetsch was born, and Bangor, Maine, where he stopped Brad Tavares at the 3:18 mark of round two at UFC Fight Night.

14: Professional fights -- including nine in the UFC -- without being finished for Brad Tavares. That streak ended in the Hawaiian’s 15th fight, as Boetsch became the first person to knock him out.

15: Number of Shawn Jordan’s 16 career victories that have ended inside the distance, a 94 percent finishing rate. Jordan defeated Jack May via technical knockout 2:03 into the third round of their heavyweight clash on Saturday night. All four of Jordan’s UFC triumphs -- May, Oli Thompson, Mike Russow and Pat Barry -- have ended by TKO.

0: Significant strikes landed by Robbie Peralta during the 4:27 he was in the Octagon against Thiago Tavares before succumbing to a rear-naked choke. Tavares landed 18 significant strikes and also held a 45-to-3 edge in total strikes.

30: Significant ground strikes landed by Murphy. The Invicta FC veteran, who landed 48 significant strikes overall, landed the majority of her offense from her back.

43: Leg kicks landed by Tom Watson during his unanimous decision triumph over Sam Alvey. That figure accounted for slightly more than half of the 86 total significant strikes landed by “Kong.” Alvey, meanwhile, landed only one leg kick in the middleweight fight.