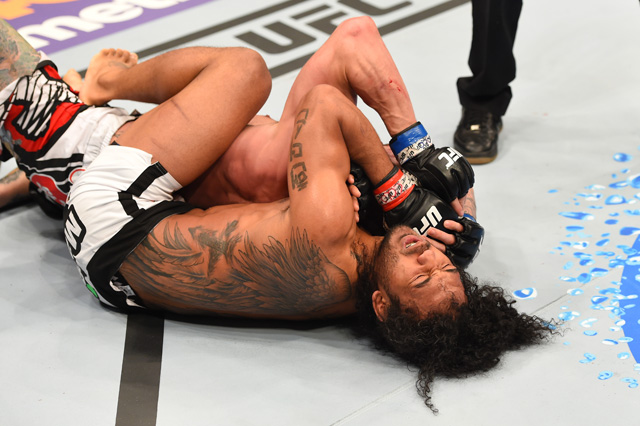 
Benson Henderson is not to be underestimated.

Fighting up a weight class against a visibly larger opponent, “Smooth” defied the odds to submit Brandon Thatch with a fourth-round rear-naked choke in the UFC Fight Night main event at the 1stBank Center in Broomfield, Colo., on Saturday night.

While Thatch’s standup acumen allowed him to land some solid blows in the bout’s early moments, Henderson’s experience in deep waters shone through as the fight progressed. The MMA Lab product took his foe’s back in round three, draining much of Thatch’s reserve. He repeated the feat following a beautifully timed takedown in the fourth stanza, and from there, a worn-down Thatch could do little to hold off the surging former lightweight champion. Moments later, a Henderson secured the tapout in one of 2015’s most memorable fights thus far.

Here is a by-the-numbers look at UFC Fight Night “Henderson vs. Thatch,” with statistics courtesy of FightMetric.com.

11-2: Record for Henderson in UFC and WEC bouts that are scheduled for five rounds. Only four of Henderson’s 12 Octagon appearances have been scheduled three-round fights.

0-2: Record for Thatch in bouts that go past the opening frame. In addition to his fourth-round submission loss to Henderson, “Rukus” also dropped a unanimous decision against Brandon Magana under the Strikeforce banner in his second career bout in 2008. All 11 of Thatch’s career triumphs have been inside of a round.

27: Days between Henderson’s contentious unanimous decision defeat to Donald Cerrone at UFC Fight Night in Boston on Jan. 18 and his fourth-round submission against Thatch on Saturday night. “Smooth” initially stepped in to replace the injured Bobby Green against Jorge Masvidal at UFC Fight Night in Fairfax, Va., on April 4 before shortening his turnaround time by agreeing to fill in against Thatch.

462: Days since Thatch’s last Octagon appearance, a first-round knockout of Paulo Thiago at UFC Fight Night “Belfort vs. Henderson” on Nov. 9, 2013. A fractured toe and shoulder and ankle surgeries sidelined “Rukus” until his return against Henderson on Saturday night.

5: Consecutive UFC wins for Max Holloway, tying him with Conor McGregor for the second longest active streak in the featherweight division. Jose Aldo is first with seven. Holloway defeated Cole Miller via unanimous decision in the evening’s co-main event.

24: Significant strikes by which Holloway outlanded Miller in the third frame. The striking stats in the first two rounds were much closer, as Holloway held a 12-to-10 advantage in round one and the two featherweights landed 12 strikes apiece in round two.

6: Consecutive victories for Neil Magny, the longest active streak in the welterweight division. Magny submitted Kiichi Kunimoto with a rear-naked choke 1:22 into the third round, ending the Japanese fighter’s seven-fight winning streak.

4: Submissions attempted by Ray Borg against Chris Kelades in their flyweight showdown. “The TazMexican Devil” earned the tap out with a kimura 2:56 into the third round. Borg also landed five of six takedown attempts and passed guard on four occasions in the victory.

8: Total number of submissions attempted by Borg in his three-bout UFC career.

194: Total strikes landed by Escudero, the most of anyone on the card. The MMA Lab representative outlanded de Lima by 162 total strikes in the lightweight contest. He also outlanded his foe 94 to 24 in significant strikes.

6: Takedowns, landed in 11 attempts, by flyweight contender Zach Makovsky in his unanimous decision triumph against Tim Elliott. “Fun Size” also passed guard eight times in the victory. Meanwhile, Elliott held a 43-to-21 advantage in significant strikes and a 152-to-61 edge in total strikes.

50: Total strikes by which James Moontasri outlanded Cody Pfister en route to winning their lightweight bout via rear-naked choke in the second round. “Moon Walker” held a 62-to-12 edge in total strikes overall.