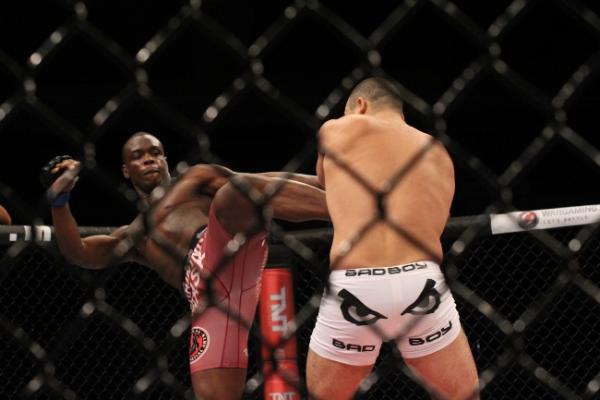 
Ovince St. Preux saw a small opening, and he took advantage of it.

St. Preux silenced the partisan crowd at the Tancredo Neves Municipal Gymnasium in Uberlandia, Brazil, on Saturday night, as he knocked out Mauricio Rua 34 seconds into the first round of their UFC Fight Night headliner.

It was the second consecutive knockout loss for Rua, who was felled by a counter left hook from his opponent. St. Preux, meanwhile, rebounded from a five-round decision defeat to Ryan Bader this past August. Here is a by-the-numbers look at UFC Fight Night “Shogun vs. St. Preux,” with statistics courtesy of FightMetric.com.

9: Significant strikes needed by St. Preux to hand Rua the fourth KO/TKO defeat of his career. Three of Shogun’s setbacks have come within the last four years.

3: UFC victories for St. Preux in which he has landed less than 10 significant strikes. In addition to his win over Rua, OSP has taken an economical approach in dispatching Cody Donovan (six significant strikes landed) and Nikita Krylov (one). Those three fights lasted a combined 4:10.

3-5: Record for Rua since losing the light heavyweight title to Jon Jones at UFC 128 on March 19, 2011. “Shogun” has been finished in his last three losses.

27: Significant strike advantage for Alan Jouban during the third round of his unanimous decision defeat to Warlley Alves. The first two rounds were more closely contested, as Jouban landed a combined 34 significant strikes, while Alves landed 29.

12: Media scorecards, of the 13 tracked by MMADecisions.com, that scored the fight for Jouban. Meanwhile, all three cageside judges submitted 29-28 scorecards in favor of Alves.

6: Takedowns landed, in eight attempts, by Dhiego Lima in his three-round verdict over Jorge Antonio Cezario de Oliveira, the most of anyone on Saturday’s card. “The Ultimate Fighter 19” runner-up also attempted four submissions during the bout, but was unable to score a finish against Oliveira, a natural lightweight who took the fight on short notice.

2: Fighters in modern UFC history to earn consecutive finishes in less than a minute each. Caio Magalhaes joined Mike Swick as the only fighters to accomplish the feat when he knocked out Trevor Smith in 31 seconds. In his previous outing, “Hellboy” stopped Luke Zachrich in 44 seconds at UFC on Fox 11.

7: Occasions in which Charlie Brenneman has been finished in the UFC, tying him for second most in promotion history behind Tank Abbott, who was finished eight times during his tenure with the organization. “The Spaniard” has suffered four KO/TKO defeats and three submission losses in the Octagon, including his first-round rear-naked choke setback to Leandro Silva. Brenneman is in good company, as Randy Couture, Matt Hughes, Jason MacDonald, Chael Sonnen, Frank Mir, Pat Barry and Melvin Guillard have all been finished seven times during their UFC careers.

12: Consecutive finishes combined between Friday’s UFC Fight Night in Sydney and Saturday’s card before the bantamweight clash between Thomas Almeida and Tim Gorman went to the judges. Almeida remained unbeaten with a unanimous decision triumph.

16: Finishes in 16 professional appearances for Almeida prior to his UFC debut. The Brazilian, who entered the Octagon with 13 KO/TKO and three submissions victories to his credit, went the distance for the first time in his career against Gorman.

14: Guard passes in two UFC appearances for American Top Team prospect Colby Covington, who submitted Wagner Silva with a rear-naked choke 3:26 into round three of their welterweight bout.