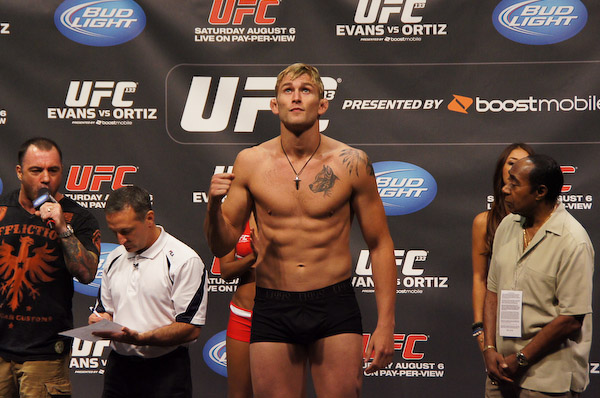 Alexander Gustafsson set the tone early against Thiago Silva, and he never looked back. In front of more than 15,000 of his countrymen at the Ericsson Globe Arena in Stockholm, Sweden, Gustafsson took a clear-cut unanimous decision over Silva at UFC on Fuel TV 2.

The 25-year-old floored his Brazilian opponent in the bout’s opening moments and then proceeded to put on a clinic for the remainder of the fight, officially marking “The Mauler’s” arrival as a bonafide contender in the light heavyweight division. Silva, who had been out of action since New Year’s Day 2011, could do nothing but give credit to Gustafsson in the aftermath of defeat.

The Gustafsson-Jon Jones comparisons will come fast and furious in the next few days, but before too much talk of the future takes hold, here is a by-the-numbers look at the UFC on Fuel TV 2 card.

38: Significant strikes advantage for Gustafsson against Silva in their 205-pound clash. The 25-year-old Swede outlanded his opponent 20 to 10 in round one, 27 to 8 in round two and 29 to 20 in round three.

10:15: Time difference between the average Gustafsson fight prior to UFC on Fuel TV 2 [4:45, good for ninth on the promotion’s all-time list] and Saturday’s win over Silva. The longest previous match for “The Mauler” came at UFC 133, when he stopped Matt Hamill at 3:41 of the second period.

.270: Striking accuracy for Gustafsson, who landed 78 of 287 total strikes versus Silva, a clip slightly below his career rate of 33 percent.

1: Knockdown for Gustafsson, who caught Silva with an uppercut early in round one. It was the fourth time Silva had been knocked down in his UFC career.

8: First-round finishes among 12 career victories for Brian Stann, who stopped fellow striker Alessio Sakara with punches at 2:26 of the opening frame in their middleweight scrap. The fastest stoppage for the Naval Academy graduate came at WEC 21, when he defeated Miguel Cosio in 16 seconds. Siyar Bahadurzada File Photo
Bahadurzada debuted with a bang.
3: Significant strikes needed by Siyar Bahadurzada to finish Paulo Thiago in his UFC debut. The Kabul, Afghanistan, native scored an instant knockout when a right hand caught Thiago after the Brazilian whiffed on a wild overhand punch. It was the first time in eight UFC bouts that Thiago failed to connect on a single strike.

5: Consecutive knockout or technical knockout victories for Bahadurzada. Out of Thiago, Tommy Depret, John Alessio, Derrick Noble and Carlos Alexandre Pereira, only Depret managed to make it past the first round against the 27-year-old known as “The Great.”

68: Significant strikes landed by Dennis Siver in his unanimous decision victory over Diego Nunes, the third-highest total of his UFC tenure. The Russian-born German outlanded Nunes in each frame, including a 22-to-9 margin in round two, en route to a successful featherweight debut.

6: Takedowns successfully defended in six attempts by Nunes. In his first three UFC appearances, opponents went a combined 10 for 42 on takedown attempts against
the Brazilian, a 24 percent success rate.

92: Percent striking accuracy for John Maguire in his second round submission win over DaMarques Johnson. The Englishman landed 29 of his 32 attempted strikes in round one, and he was also successful on all three of his takedown attempts.

31: Total strikes by which Brad Pickett outlanded Damacio Page in their bantamweight encounter. “One Punch” also held a 36-to-23 edge in significant strikes, the first time he has held an advantage over an opponent in that area since he defeated Kyle Dietz at WEC 45 in 2009.

2: Fights -- one victory and one defeat -- that have gone the distance among Page’s 22 professional appearances. The Albuquerque, N.M., native defeated Scott Jorgensen via unanimous decision in his WEC debut, and he lost a three-round verdict to Miki Shida at Pancrase “Blow 3” in 2006.

1: Punch landed by Reza Madadi in his second-round submission victory against Yoislandy Izquierdo. Despite being badly outstruck on the feet by his Florida-based opponent, “Mad Dog” was the superior grappler and won the fight with a guillotine choke at 1:28 of round two.

87: Percentage of Simeon Thoresen’s career victories (14) that have come by way of submission. The 28-year-old Norwegian secured the sixth rear-naked choke triumph of his career against Besam Yousef at 2:36 of round two on Saturday.