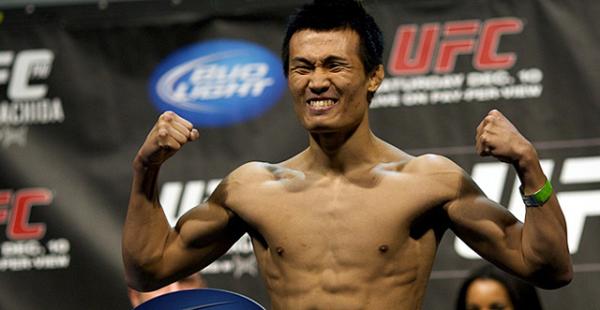 Chan Sung Jung has come a long way since he first signed with Zuffa in 2010. After losing both of his fights in the WEC, “The Korean Zombie” is now a featherweight title contender in the UFC’s featherweight division. His victory over Dustin Poirier only solidified that status, as Jung utilized both an aggressive standup attack and an active ground game in earning a fourth-round submission.

Jung earned $80,000 in bonus money for becoming the first main to defeat “Diamond” at 145 pounds. An uppercut followed by a flying knee had Poirier reeling in the fourth frame, and it wasn’t much longer before he sealed the deal with a brabo choke.

Next on Jung’s hit list: reigning featherweight king Jose Aldo. It might be awhile before that matchup can come to fruition, but there is no denying that Jung has improved by leaps and bounds. Here is a by-the-numbers look at the UFC on Fuel TV, with statistics provided by FightMetric.com.

149: Strikes landed by Chan Sung Jung in his submission win over Dustin Poirier. By comparison, Jung landed 106 in his memorable Zuffa debut, a contentious split decision loss to Garcia at WEC 48.

16:00: Difference in time between Jung’s win over Poirier and his 7-second victory over Mark Hominick in December. The majority of the Korean’s victories have been short-lived affairs, as he has finished 10 of his 12 victims inside of three rounds.

3-0: Record in the UFC for Jung. The Korean Top Team product was 0-2 in the WEC before it folded, falling to Garcia and George Roop in the now-defunct promotion.

100: Percentage of takedowns successfully executed by Jung, who grounded Poirier twice in round one and once each in the second and third frames. “Diamond” had only been taken down by two other fighters during his UFC and WEC tenure, Danny Castillo and Josh Grispi, and neither was as efficient as Jung. Castillo went 3-for-11 on takedowns against Poirier at WEC 50, while Grispi was 2-for-9 versus the Louisiana native at UFC 125. 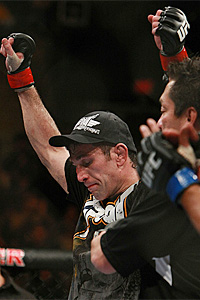 Amir Sadollah File Photo
Sadollah edged Lopez.
129: Total strikes thrown by Amir Sadollah in his split-decision triumph over Jorge Lopez. “The Ultimate Fighter” Season 7 winner has thrown more than 100 strikes in six of his nine UFC outings. His lowest total in a three-round fight came against Dong Hyun Kim, when he threw 58 total strikes in defeat.

4: Takedowns for Lopez, the most against Sadollah since Kim grounded the Las Vegas resident six times in their UFC 114 encounter.

192: Difference in the number of significant strikes landed by Jeremy Stephens (46) in his unanimous decision loss to Donald Cerrone on Tuesday night and the number of significant strikes Nate Diaz (238) landed in vanquishing the “Cowboy” at UFC 141. Cerrone, meanwhile, maintained a similar rate, landing 87 strikes against Stephens and 96 against Diaz.

5.8: Strikes per minute landed by Cerrone. The Jackson’s MMA product’s career rate is 5.84, which is No. 3 all-time in the UFC.

1: Takedown by Cerrone, his first since he landed three against Paul Kelly in his Octagon debut at UFC 125.

32: Significant strikes by which Yves Jabouin outlanded Jeff Hougland in their bantamweight showdown. It was the largest differential of Jabouin’s UFC and WEC career – his previous best came at WEC 52, when he outlanded Brandon Visher by 17 significant strikes.

166: Total strikes landed by Fabio Maldonado in his unanimous decision loss to Igor Pokrajac. Though the former professional boxer outlanded his opponent by a total of 102 strikes over the course of 15 minutes, one judge awarded a 30-27 scorecard to the Mirko Filipovic protégé.

30: Significant strike edge for Maldonado in the opening round against Pokrajac. However, the Croatian did score the only takedown of the fight in that frame.

1,725: Days since Tom Lawlor’s first professional knockout victory against Cesar Barros at a Full Force Productions event in 2007. “The Filthy Mauler” ended his middleweight clash with Jason MacDonald with a two-punch combination 50 seconds into the opening frame at UFC on Fuel TV 3.

3: Total significant strikes landed by MacDonald in his last two Octagon appearances, first-round losses to Lawlor and Alan Belcher. Belcher forced “The Athlete” to submit to strikes in the opening frame of their UFC Fight Night 25 encounter last September.

85: Percentage of Cody McKenzie’s professional victories that have come via guillotine choke. The “AK Kid” notched his 11th such win by forcing a tapout from UFC newcomer Marcus LeVesseur with his trademark hold at 3:05 of round one.

1-7: Record for Jeff Curran in UFC, Strikeforce and Bellator fights that go the distance. “Big Frog” lost a unanimous verdict to Johnny Eduardo in a featherweight clash on Tuesday night. His lone decision win while fighting for those promotions came against Dustin Neace on a Strikeforce card in 2009.