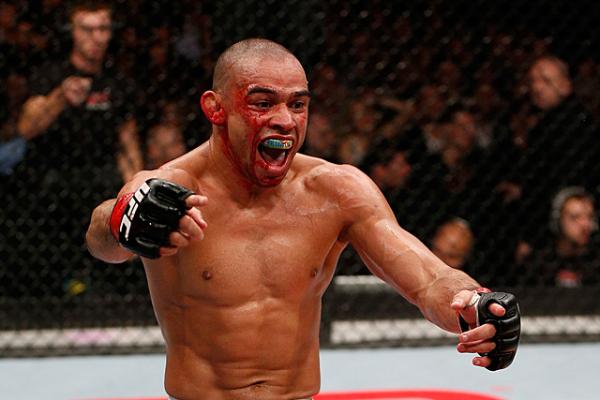 
Renan Barao looks like he’s going to be around for a while. The interim bantamweight champion did his best to shed the “temporary” label at the UFC on Fuel TV 7 headliner on Saturday night, submitting Michael McDonald with an arm-triangle choke 3:57 into round four.

Outside of one scary moment in round one, Barao managed to avoid McDonald’s powerful punches for the majority of the contest while showcasing his own multi-faceted arsenal. With 20 consecutive victories under his belt, the Brazilian now awaits a return to action by Dominick Cruz, the official 135-pound titleholder. Here is a by-the-numbers look at UFC on Fuel TV 7:

4: Takedowns landed in 10 attempts by Barao, who also passed guard on four occasions. Meanwhile, McDonald failed in his only takedown attempt in round four.

2: Number of fighters who have successfully defended a UFC interim title following Barao’s submission of McDonald. The first, Andrei Arlovski, did it against Justin Eilers at UFC 53 before the promotion recognized him as its undisputed heavyweight champion.

3: Titles defended by the Nova Uniao camp in the past two weeks: Barao vs. McDonald; Eduardo Dantas vs. Marcos Galvao at Bellator 89, and Jose Aldo vs. Frankie Edgar at UFC 156.

30: Bout unbeaten streak for Barao, who has not lost since his professional debut against Joao Paulo Rodrigues de Souza on April 14, 2005. The Brazilian’s official winning streak stands at 20, as he had a no contest against Claudemir Souza in 2007.

9: Decisions among 12 bouts on the UFC on Fuel TV 7 card, the first time an event held by the promotion has ever had that many fights go to the judges’ scorecards. Only Barao, Jimi Manuwa and Tom Watson were able to earn finishes at the Wembley Arena.

2: Victories via doctor stoppage in as many UFC appearances for heavy-handed Englishman Jimi Manuwa. His tussle with Cyrille Diabate was stopped after a round when Diabate said he was unable to continue after suffering a leg injury. Manuwa’s UFC debut against Kyle Kingsbury was stopped when a ringside physician deemed “Kingsbu” unable to continue because of damage to his left eye.

16: Difference in significant strikes landed by Ryan Jimmo in round one (25) and rounds two (6) and three (3) combined against James Te Huna. The Canadian floored his opponent with a head kick in round one and looked to be on the verge of finishing the bout, but Te Huna survived the frame.

42: Significant strikes landed by Te Huna in rounds two and three, 35 more than he landed in the opening stanza. Additionally, Te Huna outlanded Jimmo 86 to 9 in total strikes over the bout’s final 10 minutes.

5: Takedowns landed, in 14 attempts, by Matt Riddle in his split-decision win over Che Mills in a welterweight clash. “Deep Waters” took his foe down in each round and also outlanded the Brit by 78 total strikes. Riddle has landed at least one takedown in all but one of his 12 UFC appearances.

2: Fighters in UFC history with 0-4 records, after Josh Grispi’s loss to Andy Ogle. Grispi shares that dubious honor with Jay Hieron, who lost to Tyron Woodley at UFC 156 to fall to 0-4 in the Las Vegas-based promotion.

9: Fighters who have stepped into the Octagon on their birthdays. “TUF 15” alumnus Ogle turned 24 on Saturday and celebrated with a unanimous decision triumph over Grispi. Those competing on their date of birth are now 4-5 overall in the promotion.