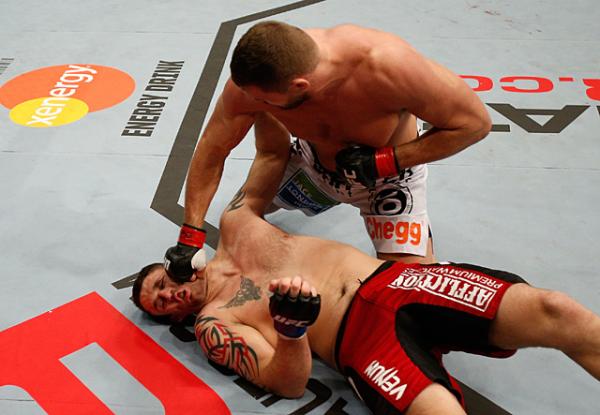 
There would be no underdog story in Sweden -- Gegard Mousasi’s jab made sure of that. The former Strikeforce light heavyweight champion cruised to three-round verdict against short-notice foe Ilir Latifi in the UFC on Fuel TV 9 headliner at the Ericsson Globe Arena in Stockholm on Saturday. “The Dreamcatcher,” who was originally scheduled to meet Alexander Gustafsson in a showdown with title implications, took no chances in punching his way to a predictable triumph over a game-yet-overmatched opponent.

While the headliner lacked suspense, the event was not without its share of highlights. Brad Pickett and Mike Easton fought tooth-and-nail in an entertaining bantamweight clash, hometown favorite Reza Madadi rallied for a victory over Michael Johnson and Conor McGregor introduced himself to the world as a star in the making. Here is a by-the-numbers look at UFC on Fuel TV 9, with statistics provided by FightMetric.com.

5: Times that a UFC headliner has featured two fighters making their first appearance with the promotion after Mousasi squared off with Latifi on Saturday. The others: Royce Gracie vs. Ken Shamrock (UFC 1); Harold Howard vs. Steve Jennum (UFC 3), Efrain Escudero vs. Philipe Nover (“The Ultimate Fighter 8” finale) and Ronda Rousey vs. Liz Carmouche (UFC 157).

62: Significant strikes by which Mousasi outlanded Latifi during the three-round affair. The former Dream and Strikeforce champion kept his opponent at a safe distance throughout the contest with his jab. Mousasi held his greatest advantage in round three, outlanding Latifi 36 to 8 in significant strikes.

51: The number of UFC fights tentatively scheduled for the month of April, including Saturday’s 13-bout bill (“The Ultimate Fighter 17” finale has only six bouts officially listed but is expected to have a minimum of 12 once the reality show concludes). The promotion’s previous high was 45 bouts, which came in June 2012.

.680: Significant striking accuracy by Pearson. His career average is 42 percent.

4: Takedowns landed, in seven attempts, by Brad Pickett in his split-decision triumph over Mike Easton. Easton’s previous four Octagon opponents had gone 0 for 13 on takedowns.

416: Total strikes attempted by Pickett and Easton in their frenetic bantamweight conflict. Easton was the more accurate of the two, landing 91 of his 182 total strikes -- a 46 percent clip. Pickett, meanwhile, landed 94 of 234 total strikes thrown, a 33 percent success rate.

100: Percent finishing rate on submission attempts for Diego Brandao thus far in his UFC tenure. The Jackson’s Mixed Martial Arts product tapped Pablo Garza with an arm-triangle choke in the first period of their 145-pound clash. In his only other attempt, Brandao submitted Dennis Bermudez with an armbar at the “TUF 14” finale.

7-0: Record in bouts that go the distance for Akira Corassani, who took a unanimous verdict over Robbie Peralta in a 145-pound tussle. The 30-year-old is 4-3 in all other contests.

21: Significant strikes by which Peralta outlanded Corassani in rounds two (30 to 18) and three (20 to 11) combined. However, Corassani landed the only two takedowns of the fight in the final stanza, likely sealing his victory.

13: Finishes, in 13 professional victories for Conor McGregor, who earned a first-round TKO over Marcus Brimage 1:07 into their featherweight bout. The 24-year-old Irishman has stopped 10 of his opponents inside of a round.

10: Media scorecards that awarded Besam Yousef a 29-28 victory over Papy Abedi in the evening’s opening preliminary contest, according to MMADecisions.com. While none of the media in question saw the fight in favor of Abedi, two cageside judges in Sweden scored the contest 29-28 in favor of “Makambo” to give him a split-decision triumph.

7: Fighters with Swedish roots who competed on Saturday’s card. While Alexander Gustafsson, the most prominent Swede, was absent from the main event due to injury, the event did feature Papy Abedi, Besam Yousef, Chris Spang, Reza Medadi, Tor Troeng, Akira Corassani and Ilir Latifi.