Viewed as one of the top light heavyweight mixed martial artists in Brazil, Alexandre “Cacareco” Ferreira left Brazilian Top Team with Mario Sperry about eight months ago and has spent the time since separated from fighting.

“I’m really thinking seriously about the possibility of retirement. I haven’t trained for almost six months,” Ferreira told Tatame.com earlier this month, leaving his personal cell number to any manager or promoter who wished to contact him.

The biggest surprise was who called. Rudimar Fedrigo, the founder and leader of the Chute Boxe Academy, was on the other end of the phone.

“When I answered the phone and he said his name, I almost hung up the phone, thinking it was someone kidding,” Ferreira said.

Once on the frontlines of the rivalry between Chute Boxe and BTT, Ferreira was responsible for two victories against two Fedrigo protégés -- Julio Cesar Jamanta and Rafael Monteiro. In addition, he was almost involved in a hotel altercation with Evangelista “Cyborg” Santos at Jungle Fight 5 in 2005. “Cyborg” reportedly took issue with how Ferreira celebrated his submission win against Jamanta, as he imitated a muay Thai dance, made obscene gestures and shouted, “[Expletive] muay Thai.” Brazilian fans have since dreamed of an official confrontation between the two. 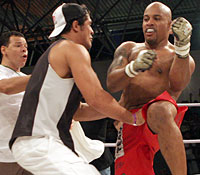 Marcelo Alonso/Sherdog.com
"Cacareco" imitated a muay
Thai dance and made
obscene gestures in 2005.
“This invitation from Rudimar was a great lesson in my life,” Ferreira said. “We can’t be arrogant because life is like a big circle. In the most difficult moment of my career, it was the person who I expected least that offered his hand and invited me to be part of this team.”

Ferreira (16-6), who has not fought in almost a year, moved from Rio de Janeiro to Curitiba two days after he received the invite.

“He’s a great acquisition for our team,” Fedrigo said, “and I hope this partnership brings great success for both of us.”

After two days of training, “Cacareco” celebrated the fact that he did not have to pass through the gauntlet he feared was reserved for Chute Boxe newcomers.

“In Rio, we always heard that the athletes who came here got beat up when they first trained, but this is absolutely not true,” Ferreira said. “I was pretty welcomed here. I’m sure I can improve my striking here and help them on the ground.”

A luta livre black belt, Ferreira has delivered 15 of his 16 career wins by submission and owns victories against UFC veterans Heath Herring and Branden Lee Hinkle. Not yet 30, he last fought in February 2008, when he submitted Lew Polley with a guillotine choke in just 20 seconds at an International Fight League show.

Ferreira’s move to Chute Boxe was the subject of a tremendous amount of discussion in Brazil, as he remains one of the few luta livre fighters to have earned the respect of the jiu-jitsu community. His powerful takedowns and impressive submission game allowed him to compete against some of the country’s most-respected BJJ black belts -- including Paulo Filho and Roger Gracie -- in grappling competitions. The Chute Boxe team welcomed him with open arms, though there was one exception.

“Everybody knows I don’t like him,” Santos said. “He’s been a part of many teams and never stopped, but there’s nothing better than to train in an academy, wash the dirty laundry and solve old problems.”

Bebeo Duarte, the one-time BTT leader who trained “Cacareco” for nearly five years, believes Fedrigo made an excellent move for his camp.

“Well trained, ‘Cacareco’ is among the 10 best 205-pound fighters in the world,” Duarte said. “His game is very hard to match. Look at Lyoto Machida, who’s one of the three best in the division right now. In great shape, I can see ‘Cacareco’ taking him down and submitting him. I don’t see Lyoto beating him simply because their skills don’t compare.”

Guilherme Cruz contributed to this report.