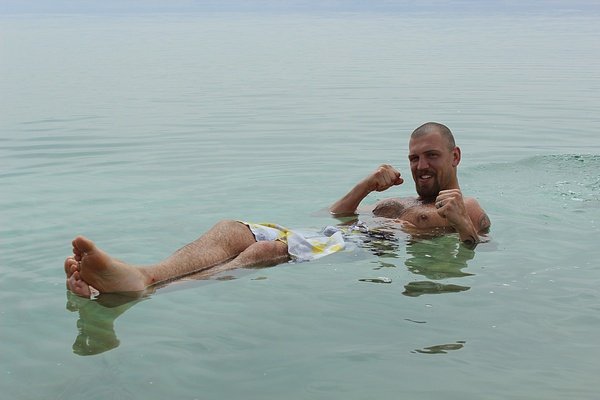 The cries bouncing around the Petra valley in Jordan were getting more desperate by the second: “Mike, Mike… MIKE!”

Ten minutes earlier, Cage Warriors heavyweight champ Mike Hayes had left the rest of the party in his wake, scaling the treacherous rock formations until he was out of sight. An Arab, perched on a ledge surrounded by tacky trinkets, shrugged and articulated what everyone was thinking.

Noting the cranked up anxiety levels his remark had caused at base camp, he left us to mind his makeshift store and set off to locate the missing fighter, skipping across the peaks and crevasses that had confounded us -- despite being barefoot and clad in traditional robes. Shortly afterwards, he returned with a grinning 6-foot-4 American in tow.

Hayes had made it to the top of the valley, a feat of athleticism and agility way beyond most humans. Once he had reached his objective, out of earshot of the echoing appeals, he had been unable to retrace his steps and ended up stranded on a plateau, with as much chance of finding a sheer drop as a route home.

Later on, the fighter who claims the nickname “300” spoke of his adventure nonchalantly.

“I do a lot of extreme sports: back-country skiing and snowmobile (riding) and wakeboarding and stuff like that. That rock climbing episode was kind of random. I mess around a little bit with that kind of stuff but nothing official,” he said. “My wife keeps telling me to be careful, but I just tend to ignore it because when you try to be careful, that’s when you’re going to get hurt. I take that into my fighting and everything else I do. Let it come and whatever happens, happens.”

This fearless philosophy has served Hayes well in recent times. He won the vacant Cage Warriors belt with a third-round kimura victory over Andreas Kraniotakes in Dubai in March. Once again, it was a case of the Redmond, Wash., native taking a leap of faith.

“It was short notice. I didn’t know much about him and I hadn’t been in the cage for six months, so there was quite a bit of ring rust when I got in there and it showed. First couple of rounds, I started really slow. I was disappointed with that and the way my stand-up was, but you’ve always got to be happy with the win,” Hayes said. “It’s a tough sport. Getting a win over a good guy gave me a boost, and it also gave me areas to work on for self-improvement.”

Cage Warriors has always had a reputation for building fighters and putting on compelling fights, but a change in management accompanied by a welcome injection of cash has taken the show to another level. By the end of 2012, they will have completed a season of 17 shows in 13 countries: all streamed live and also available on TV around the world courtesy of deals with a growing number of media partners. Mick Bower
The Dead Sea area brought Mike
Hayes to life.
This increased exposure means they are now able to attract a higher caliber of combatant. After a period in the wilderness due to injury and politics, Hayes seems to have found a home that suits.

“I had a little bit of concern about signing a contract because I’ve signed three contracts between myself, management companies and Bellator that have really screwed me over pretty bad,” he said. “I was hesitant, but talking to Graham (Boylan, CEO of Cage Warriors Fighting Championship) and the rest of the team, we’ve worked it out and set it up in a way that works for both of us. I wanted to travel -- that’s one of the reasons I got into MMA. The Middle East is awesome. I’d never been outside of America and now I’ve been to Dubai and Jordan.”

Hayes was in Jordan in an ambassadorial role. The previous night, he had been the star attraction at a fan event held at a mall in the capital city Amman. The turnout was healthy; a testament to the strength of the growing prominence of the Cage Warriors brand in the region. While a percentage of the fans who stood in line were just after the novelty of a photo with a scary looking American, a good number knew all about the big guy and what he’d done to earn the outsized belt he was holding.

After a hard night’s flesh pressing, a morning of mountaineering misadventure and over 300 miles of a rollercoaster-meets-demolition-derby Jordanian taxi ride, Hayes got the chance to strip off and enjoy the ultimate in relaxation experiences.

“The Dead Sea was unreal. It’s so hard to explain. Everybody says you can float in it without even trying, but you don’t understand it until you get in. You literally just kick back and hang out. You can do whatever you want and stay on top of it. It’s amazing -- an unbelievable experience,” he said.

That evening, it was back to business. Mike took his position cageside at Cage Warriors Fight Night 5 in Amman’s 2,000 seat New Boxing Arena. While the enthusiastic crowd went nuts for the growing ranks of local boys on the undercard, Hayes was pre-occupied with the eliminator to decide his next challenger.

The charismatic Bobby Brents was matched against late replacement Bellator vet D.J. Linderman. With this last-minute recruitment, Cage Warriors had inadvertently set up the possibility of that most appealing combat sports scenario: the genuine grudge match. M. Bower
Hayes and Linderman are on course
for a rematch far from home.
Three years ago, Linderman defeated Hayes on an Alliance Fights card. On the way to that unanimous decision, there was a contentious shot to the groin. The actual details of the incident were forgotten as the pair indulged in a war of words on Myspace -- a phrase that sounds as archaic as “abusive tapestry” or “cruel cave painting.” For his part, Linderman claims that Hayes has dodged a rematch on a number of occasions.

Hays chipped in with his take on the situation: “I can’t stand D.J. Linderman. He is a piece of trash. I don’t say that about people but, unprovoked, he talked a lot of crap about me. Bad too, not just like casual trash talk and I want to punch him in the face so bad. I can’t believe I’m saying this, but I hope he wins so that I get the chance to put a beating on him.”

Hayes got his wish, with Linderman boxing clever to outpoint Brents.

Afterwards, when the champion was invited into the cage, it was noticeable that some of the burlier members of Cage Warriors staff were on hand in case things turned ugly. All week, the needle between the pair had been palpable. Hayes, normally an easy going character and loving family man, finds it hard to even look at his nemesis.

Hayes was a picture of contempt as he stared back at his rival.

If you had to put together a menu for an ideal title fight, a couple of skilled, smaller sized heavies with a sincere hatred for each other would look pretty tasty. With time to build the hype, this has the potential to be Cage Warrior’s biggest fight to date. If Mike Hayes prevails, it will be a significant step on his quest to reach the summit of the sport.