Gina Carano doesn’t want to go it alone -- which is why the sport’s first female superstar said she opted to renegotiate her contract with the fast ascending Strikeforce promotion rather than entertain an offer with the UFC.

The San Jose-based promotion announced that it had re-signed the undefeated raven-haired fighter during its June 6 event broadcast on Showtime. Carano (7-0) meets rival Cristiane “Cyborg” Santos (7-1) on Aug. 15 at the HP Pavilion in San Jose, Calif. Not surprisingly, the 145-pound championship bout will be the first-ever women’s match to serve as a headliner for a major U.S. promotion.

“Strikeforce is taking female fighting seriously and I feel like I’m definitely part of something, rather than a freak show one-woman act here,” Carano told Sherdog.com Tuesday.

It didn’t have to go this way. After the collapse of Pro Elite last October, Carano and a slew of other capable fighters were very much in need of a new home.

Carano, 27, met with UFC owners Lorenzo Fertitta and Dana White in February, the day before Strikeforce announced a multi-year broadcast deal with Showtime.

In recent years, White’s take on women’s MMA had been both steadfast and adamant: he didn’t want to see it in the Octagon. But Carano’s star power –- she fought two EliteXC events on CBS and stole the show as the quiet and sultry assassin “Crush” on NBC’s “American Gladiators” revival in a year’s time –- even blinded White after a while.

“I think she’s got all the tools, so what I’m willing to do is bring Gina into the WEC,” White told the press last November. “We could do fights whenever there’s a challenger for Gina.”

Carano admits she was tempted to join the sport’s No. 1 promotion.

“I had an option to go and be a part of something great, something that I think every fighter looks at, you know, the UFC and thinks this is it, this is what you want to do,” said Carano. “The UFC is like the older brother, like where you always wanted to do, so to actually have the option of being the first female to be a part of that was great.” 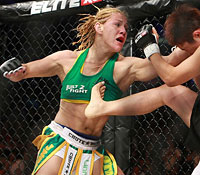 Dave Mandel/Sherdog.com
Cristiane "Cyborg" Santos will
be a stiff test for Gina Carano.
Strikeforce obtained Carano’s contract in February through an assets acquisition deal it had made with Pro Elite, whose funds had run dry. Carano would likely have had to take her battle to the courts to dispute the acquisition. Luckily, Carano thought about more than herself in making her decision.

“I thought I’d been putting in work here at Showtime and women are finally starting to get recognition,” she said. “There’s this Cyborg fight that everybody’s stoked on, and I just felt that if God really wants me to be a part of something, then I feel like being part of something as a group with all of the other female fighters and building something up, rather than being this one-person show is going to be better for the females that come after me. I decided to stay and fight. I feel a part of something and I think that’s more important than just looking out for me.”

Of course, a pay raise doesn’t hurt either. Four months of closed-door negotiations between Strikeforce CEO Scott Coker and Carano’s reps at the L.A.-based Wasserman Media Group eventually yielded a new multi-fight agreement Carano said she’s “happy with.” Carano was paid $25,000 for her last victory over Kelly Kobold in October –- a bout that 5.2 million viewers ogled on CBS.

At one point, Coker politely referred to Carano’s re-negotiations as a “holdout at (training) camp.”

“It wasn’t about trying to hold out,” said Carano. “Once we all buckled down and got talking, it got done immediately. But there were certain things I needed to get organized with my management and a bunch of other things. There’s just things that I needed to get organized with myself and we needed to go through the contract and be very specific. I was in a good negotiating spot and they didn’t rush anything, so it went along as it should have.”

Whatever the price his organization shelled out for “The Face of Women’s MMA,” Strikeforce CEO Scott Coker will likely come out the biggest winner.

Carano has been a conductor for positive press and broke through mainstream barriers when she was named one of Yahoo’s Top 10 Influential Women of 2008, alongside New York State Senator and former first lady Hilary Clinton, vice-presidential candidate Sarah Palin, media guru Oprah Winfrey, and movie star and humanitarian Angelina Jolie.

Coker said the Aug. 15 event could be among his top two all-time draws. Coker said Strikeforce sold over 18,000 tickets for its Frank Shamrock-Cesar Gracie face-off in March 2006. Tickets for Carano-Cyborg went on sale Monday.

“Showtime and CBS have been building up this fight for the last year and a half,” said Coker. “People were waiting for this fight six, eight months, a year ago. They did all the promoting and the marketing and the building up the stature of this fight. We’re the lucky ones that get to promote it.”