It was David’s night from the start, as he dropped Granados with a fast jab and then grounded his opponent with a follow-up takedown –- the first of many for the evening. David doled out punishment from top until the first-round bell sounded at three minutes.

Granados landed in half guard out of a feverish scramble in the second set, but David backdoored out and slammed Granados back to the canvas. With an active David hovering over him, Granados could find no reprieve again, as the rounds were adjusted to the appropriate five minutes.

The bantamweights went toe-to-toe in the third round, but David dove for safer ground when Granados hurt him with an uppercut. A grounded Granados fought his way out from underneath David for the first time all night only to be scooped to the mat seconds later where he stayed.

As the fight moved into the fourth and fifth rounds, the well-conditioned David seemed unstoppable from a comfortable half guard, raining down occasional punches and elbows on the marooned Granados. David was rightfully awarded scores of 50-45 across the board. 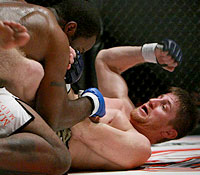 Dave Mandel/Sherdog.com
Gardner (bottom) held on to
claim victory against Alexander.
Kenneth Alexander rallied with a flurry of strikes in the third round to fluster opponent David Gardner, but it wasn’t enough to push the WEC veteran ahead on the judges’ cards. Gardner was awarded a split decision with dual 29-28 tallies in a well-paced affair, handing Alexander his second close loss in two outings.

Gardner outworked Alexander in the first and second rounds on positioning alone, though Alexander found Gardner’s back on three occasions, but couldn’t get his hooks in to secure the finishing choke.

Jennifer Tate eked out a split decision over Sarah Schneider in a competitive 125-pound contest. The Cesar Gracie-trained Tate showed versatility on the mat with rear-naked choke and armbar attempts in the first three-minute round, but Schneider battled back with her own armbar attempt in the second set. Schneider flattened out Tate in the final three-minute stanza, but was unable to find an ending to this grappling-heavy affair. Tate took the bout with 29-28 scores from two judges, while another saw it 29-28 for Kansas City, Mo., visitor Schneider.

Heavyweight Drew Montgomery made short work of Richard Blake in their rematch, muscling the No Limit rep against the fence before taking him down. From half guard to mount, Montgomery stifled a dazed Blake with elbows and punches for the TKO stoppage 2:12 into the first round. 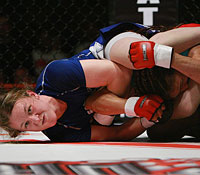 Dave Mandel/Sherdog.com
Sarah Schneider (left) came up
just short against Jennifer Tate.
Michael Brown clipped Marcus Gaines with a close-range right to set up a takedown to half guard to start their middleweight contest, but Brown wasn’t able to capitalize from side control.

Brown nailed a high-amplitude slam reminiscent of Matt Hughes at the top of the second, but Gaines reversed immediately. A savvy Brown found a kimura from bottom that gave Gaines all he could handle until he freed his appendage. Seizing his opening, Gaines unloaded elbows and fists, knocking Brown out inside his guard for an impressive 2:18 finish into the second round.

After an eventful first round, Jared Papazian dropped Art Arciniega with a sound right at the top of the second. Arciniega got his chance to recover and went for two triangle choke attempts before referee John Schorle stood the pair. Arciniega rebounded with a standing guillotine choke and forced Papazian to tap out 34 seconds in the third round.