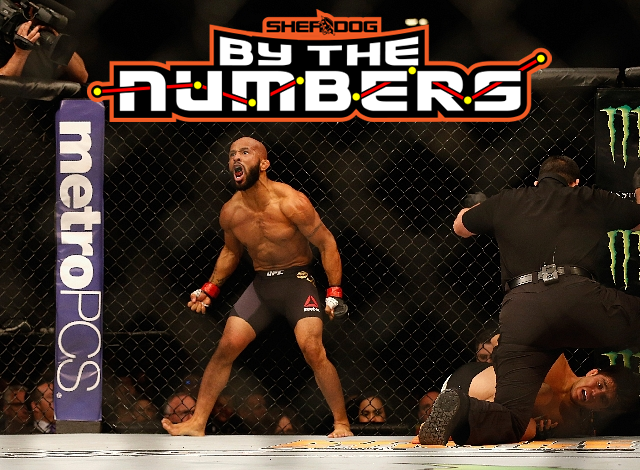 Demetrious Johnson first met Henry Cejudo at UFC 197 on April 23, 2016. An Olympic gold medalist in freestyle wrestling with an unblemished mixed martial arts record, Cejudo seemed poised to give Ultimate Fighting Championship flyweight titleholder the toughest test of his career. He enjoyed a promising start, as he secured a takedown early in the first round. However, when Johnson scrambled back to his feet, he engaged the challenger in the clinch and buried him with knees to the body 2:49 into the first round.

UFC 227 on Saturday will see the two fighters pitted against one another for a second time, as they collide in the co-main event at the Staples Center in Los Angeles. In three appearances since losing to “Mighty Mouse,” Cejudo has dropped a split decision to Joseph Benavidez, stopped Wilson Reis with punches and outpointed a surging Sergio Pettis. Johnson, meanwhile, has gone 3-0 with a pair of sensational finishes.

As Johnson prepares for his latest rematch, here are some of the numbers that have come to define him:

11: Consecutive title defenses, an all-time UFC record. Johnson remains the first and only flyweight champion the promotion has ever known.

65: Takedowns completed, the most in UFC flyweight history.

10: Takedowns or more executed in three different fights. Johnson stands as the only fighter to achieve the feat. He scored 10 takedowns on Norifumi Yamamoto, 12 on John Moraga and 14 on Kyoji Horiguchi.

10: Wins without a loss to start his career. During this run, Johnson fought in regional promotions before signing with the World Extreme Cagefighting and later transitioning to the UFC.

17: Seconds needed to announce his arrival in MMA. Johnson knocked out Brandon Fields in his professional debut on April 28, 2007.

47: Significant strikes landed in his April 2010 decision defeat to Brad Pickett, per FightMetric. The Brit, on the other hand, only connected with 25 but managed to secure 10 takedowns. It was the first loss of Johnson’s career.

2: Defeats on his resume. Apart from Pickett, the only other fighter to beat Johnson was former bantamweight champion Dominick Cruz. Takedowns were also a major factor in their battle, as Cruz was credited with 10 of them.

2: Victories in the WEC. Johnson decisioned Nick Pace and submitted Damacio Page before inking a deal with the UFC.

13: Wins in the UFC. Johnson’s defeated Miguel Torres, lost to Cruz and drew with Ian McCall in his first three appearances inside the Octagon. He has gone a perfect 12-0 since.

5: Takedowns landed in a unanimous decision victory over Torres, who at the time was considered one of the best pound-for-pound fighters in the sport.