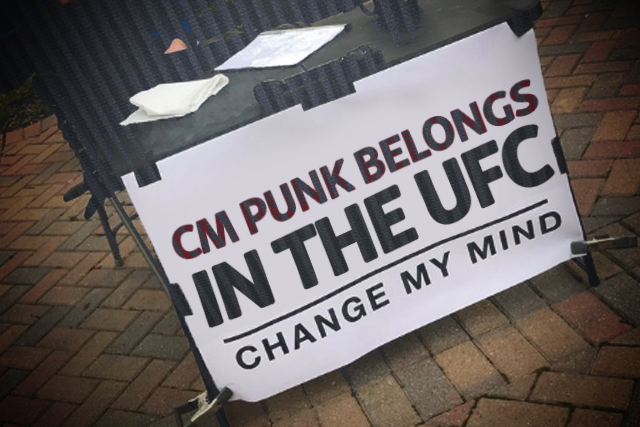 As UFC 225 approaches, the MMA space continues to resound loudly with the popular opinion that neither Phil Brooks nor opponent Mike Jackson deserve to fight in the Ultimate Fighting Championship. That outcry is amplified substantially by the fact that Brooks-Jackson is on the main card this Saturday in Chicago. The crux of the criticism is that these two 0-1 dilettantes have no business competing in the world’s premier mixed martial arts promotion, let alone on a pay-per-view card, and in both cases, they are occupying space that should have gone to more accomplished fighters.

I disagree. In fact, a lot of fans are not only coming up with untenable conclusions regarding the whole “CM Punk” situation, but they don’t even seem to be starting from the right questions or assumptions. When I say “a lot of fans,” do I really mean “you, the person reading this right now”? I suppose I might. It depends on your reasons for disliking the fight and how well you can elucidate them -- maybe even to yourself. Step up to my virtual folding card table here, and let’s find out.

If your reasons for being upset with the Brooks-Jackson fight include the word “deserve” or any synonym thereof, you and I probably aren’t going to agree. To quote William Munny, the anti-hero protagonist of the 1992 western film “Unforgiven,” deserve’s got nothing to do with it. The very word implies that there is some kind of merit-based system in place here. There is not. Fighters don’t deserve their way into the UFC; they are chosen by a process that, even when it works, is answerable to nobody outside of the organization.

That’s at best. At worst, the process can be capricious and petty, driven not by fighters’ athletic merits or even their entertainment value but by personal animus. While one can make a case that fighters who win a season of “The Ultimate Fighter” have earned their way into the UFC based on merit, was Amir Sadollah and his 0-0 professional MMA record more deserving of a contract than Ben Askren at any point in Askren’s career? Of course not, including when Askren himself was 0-0. Let’s not pretend there was some neat and orderly line for Brooks and Jackson to jump. At best, there’s a crowd milling in front of a velvet rope that is raised and lowered by a bouncer who also happens to own the nightclub.

Speaking of entertainment value, do you believe fighters should be in the UFC based strictly on whom they beat, or does it matter to you how much fun their fights are to watch? The UFC has an established pattern of letting fighters -- even title contenders -- with less-than-riveting fighting styles go as soon as they lose a fight or two. There’s a reason I can say “reliable mid-card action fighter” and you understand exactly what I mean. There’s a reason Clay Guida has been in the UFC’s employ for 12 years and counting while Antonio McKee was cut after a one-and-done run in the organization. How did you feel when Top-10 fighters Jon Fitch and Yushin Okami were let go, or, more recently, Ryan Bader and Phil Davis? Were you shouting from the rooftops, at least from the rooftop of your Twitter account, about the injustice?

Brooks-Jackson is nothing new. It is simply the latest in the sport’s long history of circus sideshow fights, which actually predate the sport’s legacy as a legitimate sporting contest. At the root of it all, #TruthVsPunk, as Jackson tags it, is a professional wrestler who has shown poor aptitude for real fighting squaring off against an MMA media personality with a small handful of boxing and kickboxing bouts on his record. I was an adoring fan of Pride Fighting Championships, but that organization absolutely loved to take pro wrestlers and find out whether or not they could actually fight by pitting them against the best fighters in the world, fighters who might have outweighed them badly to boot. In fact, this fight would never have taken place in Pride because they would have been booked in separate matches, probably Brooks vs. Robert Whittaker and Jackson vs. Stipe Miocic in non-title fights, of course.

My point in all of this: If you are going to rail against the Brooks-Jackson fight, at least have a concrete idea of what you are railing against and what you are advocating for. If you don’t think those two men belong in the UFC, you are 100 percent within your rights to believe that, but by what standard do they not belong? By the standards of MMA accomplishment? That is not -- and has never been -- the way this works, and are you sure that pure won-lost records are how you wish the UFC would vet its roster? Or do you condemn this bout by the standards of exciting viewing? I can all but guarantee you their fight will end quickly and brutally. It will not be the most boring fight on this card by a long shot, and this is a fantastic card.

To be frank with you, I feel strange making this argument and defending this fight. Part of it may be due to my recent conversation with half of the bout in question and Jackson’s refreshingly direct take on his own aspirations, those of “CM Punk” and the realities of the fight business. I am on record as claiming that sensationalist, “cotton candy” matchmaking is one of the biggest problems plaguing this sport and the credibility of its dominant organization. However, I have never been uncomfortable with the circus aspects of mixed martial arts; again, I loved Pride in all its ridiculous glory.

My objection has always been when the freak show infringes on the legitimate athletic contest, because there is no reason they can’t coexist. I loved Randy Couture humiliating James Toney, because neither of them was fighting for a title shot. It just provided some memorable weirdness in the middle of an otherwise unremarkable main card. While I’d be happy if Brock Lesnar wanted to grace the Octagon once or twice more before ambling off into the allegedly Clomiphene-clouded sunset, I’m wary of it precisely because I worry that the UFC might try and insert him into the title picture on the heels of a win and because of the very real chance that he would embarrass another heavyweight contender even if it did not. There seems to be zero risk of that happening in the wake of a match between a 39-year-old retired professional wrestler and a 33-year-old media personality, so I’m in.