Gegard Mousasi (left) will seek to erase the memory of a foul-marred draw with Keith Jardine. | Photo: Taro Irei


Though it appears to be on a financial drip feed, Japanese promotion Dream, once hailed as the successor to Pride Fighting Championships, is still alive. On May 29, 6,522 fans at the Saitama Super Arena witnessed the quarterfinals and semifinals of the Dream bantamweight grand prix -- a tournament designed to crown Japan’s best 135-pound fighter not under contract with Strikeforce, the UFC or elsewhere.

The grand prix concludes on Saturday, as Masakazu Imanari faces Hideo Tokoro in the final. Here is what to watch for at Dream “Fight for Japan: 2011 Japan Bantamweight Tournament Final” at the Ariake Coliseum in Tokyo:

Shinya Aoki’s favorite playfellow made the semifinals on the back of a controversial decision victory over ZST bantamweight champion Keisuke Fujiwara and a surprise submission of WEC veteran Kenji Osawa. With Imanari, it always boils down to a question of which version shows up on fight day. He has allowed himself to slide against lesser opponents in the past, but, at the same time, he has almost always performed well on the big stage.

“Cinderella Boy” Tokoro has successfully fought out of a three-year slump and is currently enjoying his best run since a four-fight winning streak in 2006-07. Considered a pure grappler for most of his career, the Akira Maeda protégé has drastically improved his standup ability during the course of his most recent outings.

Hiroshi Nakamura laid out the blueprint on how to beat Imanari at Deep 52 Impact in February, as he stayed tactically disciplined and kept the fight on the feet, thus exploiting the virtually nonexistent standup skills of “Ashikan Judan.” If Tokoro can resist the temptation to engage in a grappling-heavy match with the footlock specialist, his chances to win the bantamweight tournament will increase dramatically. 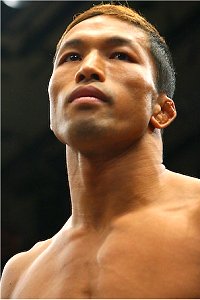 T. Irei
Miyata is eyeing a Dream title.
Dream featherweight champion Hiroyuki Takaya had a three-fight win streak snapped in May, when he lost an odd split decision to relative unknown Robert Peralta in his stateside comeback and Strikeforce debut. Previously, he had experienced a renaissance at age 33, with impressive knockouts against former Dream lightweight champion Joachim Hansen and onetime WEC bantamweight titleholder Chase Beebe and a unanimous decision over Bibiano Fernandes -- the man who defeated him in the 2009 Dream featherweight grand prix final. His signature strike, the right hook, has yielded outstanding results throughout his career.

His opponent, Kazuyuki Miyata, has come a long way since being posterized and hospitalized by Norifumi “Kid” Yamamoto in a mere five seconds in 2006. “Little Hercules” has always wowed crowds from Osaka to Yokohama with his explosive suplex takedowns, but conditioning and submission defense had long been an issue for the 2000 Olympian. During his current winning streak -- it spans six fights, with five of them going the distance -- he has controlled his opponents with stifling top control and shown little signs of fatigue.

At the height of his career, Armenian kickboxer Gegard Mousasi was ranked No. 3 at middleweight and No. 6 at 205 pounds. A lopsided decision loss to Muhammed Lawal cost Mousasi the Strikeforce light heavyweight title and resulted in a wobble to his career trajectory. His kickboxing remains stellar, as does his submission game, but the loss to “King Mo” exposed holes: takedown defense and the inability to sweep an outstanding wrestler. His last fight, which ended in a majority draw with UFC castaway Keith Jardine, left Mousasi and his fans unsatisfied, as he gave away a much-needed win with an illegal upkick that cost him a point.

Olympic judo silver medalist Hiroshi Izumi is the latest in a long line of highly touted Japanese judokas entering MMA. Like Satoshi Ishii, Izumi has underwhelmed with his performances so far, including a knockout loss in his professional debut. The undersized light heavyweight struggled through tune-up opposition but finds himself with a 4-1 record heading into this match. The 29-year-old is being thrown into the fire against Mousasi, who has not lost a fight in Japan in his last 11 appearances. The Armenian could use a big knockout to restore some of his confidence.

Will Fickett Break Under Kawajiri’s Pressure?

With 30 wins by way of submission, it is no secret where Drew Fickett’s strengths lie. The seven-time UFC veteran holds wins over notable opponents like Dennis Hallman, Kenny Florian, Josh Koscheck, Kurt Pellegrino and Keita Nakamura, but he hit rock bottom a year after his contract with the promotion expired. Between August 2008 and August 2009, Fickett lost eight of his 10 fights, against solid veterans and obscure journeymen. In 2010, he broke out of this slump and reeled off five consecutive submission wins, three of them in a single night to win the Shine Fights lightweight grand prix. In his last appearance, however, he succumbed to punches against fellow UFC veteran Brian Cobb under the Maximum Fighting Championship banner.

Tatsuya Kawajiri yielded to the elbows of arguably the top lightweight fighter in the world, Strikeforce champion Gilbert Melendez, in April. The drubbing he received at the hands of “El Nino” was probably the worst of his 12-year career, surpassing the war he had with Eddie Alvarez in 2008. The “Crusher” has always been respected for his strong wrestling and vicious ground-and-pound, traits largely absent from the rest of the Japanese MMA contingent. His attritional attack from top position has broken the spirit of the vast majority of his opponents. Could Fickett be next to suffer that fate?