TOKYO -- As “K-1 Dynamite: The Power of Courage 2010” on Friday closed the book on Fighting and Entertainment Group’s 2010 efforts, it also kicked off the beginning of an approximate three-month hiatus, according to FEG President Sadaharu Tanikawa.

“As promoters, we caused a lot of problems for fighters, venues, and the fans last month,” said Tanikawa, acknowledging the highly publicized issues the promotion has been experiencing in the recent past. “But I’d like to make sure that 2011 is a comeback year for us. We will restructure the company for three months and start holding events in the spring.”

During this self-imposed hibernation-slash-corporate metamorphosis, the long-awaited introduction of much-needed investors is also expected to come in January. Despite anxiety in the final quarter of 2010 over the viability of support from Chinese investment bank Puji Capital, Tanikawa’s comments indicate negotiations are still healthy and on-track.

“We’ll make an official announcement soon, but Puji will serve as an intermediary,” Tanikawa said. “We’re in negotiations with Shanghai Media Group, and Puji is helping us work out a deal with them. There’s also investment coming in from the United States. We’ve signed deals with multiple companies, though I’m not sure how much I can really talk about it yet. I’m hoping to have a press conference for all of this in January.”

According to Tanikawa, FEG’s promotional direction in 2011 focuses on courting new talent and strengthening its heavyweight divisions. To wit, the recent successes of Strikeforce heavyweight champion Alistair Overeem in the Japanese ring and media have seemingly energized Tanikawa into recommitting to push the triple-crowned Dutchman well into the New Year.

“I've committed myself to the comeback of martial arts in Japan. Right now, martial arts are a sport for hardcore fans. However, we need to attract casual fans, too. Alistair Overeem’s fights, in particular, attract the general public,” said Tanikawa. “I want Alistair Overeem to become the strongest man amongst six billion. I plan to offer him fights in both K-1 and MMA; he’s going to be very busy in 2011. Andrei Arlovski, Josh Barnett, Semmy Schilt, Badr Hari and Jerome Le Banner -- they all want to fight Alistair, and I want Alistair to crush all the challengers.” 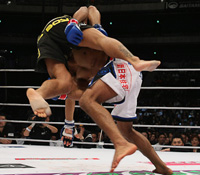 T. Irei
Tanikawa was unimpressed with the
Takaya-Fernandes bout on NYE.
Part of Tanikawa’s desire to continue pushing Overeem as a crossover star stems from his current assessment of MMA in Japan, which is less than optimistic. Though Hiroyuki Takaya successfully took the Dream featherweight title from Bibiano Fernandes at “Dynamite,” Tanikawa was unimpressed with the performance, claiming the bout did more to drive away casual interest than it did to attract it.

Tanikawa’s solution for this, as well as his vision for gaining wider mainstream appeal, seems to be in taking MMA fighters out of their element in an attempt to replicate Overeem’s successes. Tanikawa used former Strikeforce light heavyweight king Gegard Mousasi and his commanding decision victory over K-1 heavyweight champion Kyotaro Fujimoto as a prime example.

“I want Mousasi to fight for K-1 if he’s interested. If you think about how things are in Japan, I think it’s better to fight in K-1 because it makes fighters very popular and famous. MMA fighters like [Norifumi] “Kid” Yamamoto and Genki Sudo won and lost in the K-1 ring, but they still became famous from it. I want Mousasi to become very famous,” Tanikawa said. He also noted “Wicky” Akiyo Nishiura as another mixed martial artist he hoped to head hunt for K-1 competition.

However, that does not mean FEG will abandon Dream or MMA bouts, as both Tanikawa and Dream Event Producer Keiichi Sasahara reiterated a desire to fill out both poles of the MMA weight divisions. Asserting that “Dream needs a heavyweight class,” Tanikawa expressed a desire to bring in more talent at heavyweight and lighter weight divisions for the promotion, particularly given the newly divided featherweight (143 pounds) and bantamweight (134 pounds) divisions. The immediate plan for Dream in 2011 is to stage a bantamweight tournament.

“Takaya just won the belt, so we are thinking that, since he is the featherweight champion, we might just have a bantamweight tournament this year. We still have to figure out what comes next for Takaya, so we’re going to take some time before deciding who will be his next challenger,” said Sasahara.

One person who definitely will not be entering an FEG ring this year is Bob Sapp, who reportedly pulled out of his IGF special rules bout with disgraced sumo wrestler turned professional wrestler Shinichi Suzukawa. When pressed for the details behind Sapp’s sudden refusal to fight on the day of the event, Tanikawa scoffed.

“Does anyone actually care?” he asked. “I don’t know the reasons why, but we did our best to make him fight. He just said he didn’t want to. This is typical [of Sapp]. I feel really sorry for Suzukawa, actually.”

Before the inevitable winter hibernation, focus now shifts to “Dynamite’s” television performance. Given that a vast majority of Japan watches television staples such as NHK’s Red and White Song Battle, amongst several other comedy variety shows on New Year’s Eve, Tanikawa expressed a tempered hope for at least low double-digit numbers for “Dynamite.”

“In terms of [Friday] night’s ratings, if we can get double digits, even if it’s around 10 percent, that’s good,” he said. “I heard that [comedy variety show] Gaki no Tsukai and the Red and White Song Battle were really good shows last night. I’d be happy with 10 percent [for ‘Dynamite’].”