The ordering process for Ultimate Fighting Championship pay-per-views has changed: UFC 243 is only available on ESPN+ in the U.S.

Just hours before the stock was set to trade on the New York Stock Exchange, Endeavor pulled its initial public offering on Sept. 26 after soft demand from investors spooked the entertainment conglomerate. Earlier in the day, the talent agency had slashed its offering price from the $30-$32 range down to the $23-$27 range, as well as reducing the overall outstanding shares from 19.4 million to 15 million, in an effort to spark investors’ appetite for the stock. Despite those adjustments, Endeavor ended up pulling the plug on going public after Wall Street pushed back against fellow unicorn IPOs WeWork and Peloton, with the former’s CEO being ousted after delaying its own public offering and the latter closing 3.5 percent lower than its original offering price on its first day of trading. Rumors have swirled that after the last-second turnaround Endeavor will wait until next year at the earliest before deciding if it should attempt to go public once again.

Although WeWork and Peloton certainly didn’t help matters, investors have plenty of reason to be cautious when it comes to Endeavor’s financials, starting with the company’s revenue: 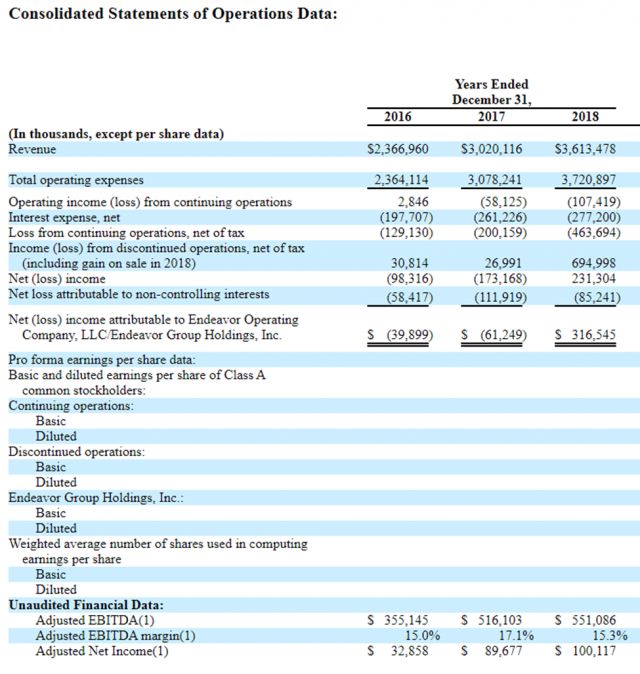 Mergers and acquisitions also generally don’t show up as expenses in “adjusted” numbers since they’re not a regular occurrence for most firms, but in Endeavor’s case, M&A is a core part of its strategy. The company has incurred at least $90 million in M&A costs over the last three years, including $120 million in 2018. According to an interview with Variety, Endeavor CFO Jason Lublin stated the IPO was supposed to help give the firm currency to continue its acquisition spree, which was “central to [Endeavor’s] strategy.”

Even though there is some cause for concern regarding Endeavor’s income reporting, the biggest issue the company faces is its staggering amount of debt. According to the firm’s S-1 filings, as of June 30, Endeavor had around $4.6 billion of debt on its books, around $400 million more than the company paid for the Ultimate Fighting Championship in its entirety. That doesn’t include a term B loan the company took out in early September for an additional $465 million, raising Endeavor’s debt to almost $5 billion or 8.3 times the company’s EBITDA.

To understand how that could become a problem for the company, one need only look at the original terms of the IPO. At 19 million shares set somewhere between $30-32 per share, the company would have raised around $600 million had things gone as expected. On Sept. 11, preferred equity holders from Endeavor’s acquisition of the UFC back in 2016 redeemed their notes to the tune of around $538 million, which led the talent organization to take out the aforementioned $465 million loan to pay the investors. Had Endeavor’s IPO gone the way the company executives expected, that still would have only given the firm a net gain of around $62 million after the $465 million loan was paid off, not even making a dent in the original $4.6 billion on company books.

Without the expected equity boost, Endeavor and its subsidiaries are now left with increased debt and less flexibility in strategic decisions moving forward. As I pointed out in an earlier piece, there was also a chance that Endeavor’s IPO could disappoint, but canceling it altogether at the Eleventh Hour is a worst-case scenario. Assuming the firm wishes to pursue the offering again in 2020, it will have to prove to prospective investors that it can pay down its debt to more digestible levels. Endeavor will also have to find a way to stabilize its revenues so it can ease concerns that the organization’s earnings are too volatile.

Which brings us to the UFC. The promotion has taken several steps to increase guaranteed revenue under its new ownership, including deals with ESPN and various international governments. With its parent company now leveraged more than ever, it wouldn’t be shocking to see the UFC attempt to cut costs and boost revenue even further. This could be done by cutting the size of its roster, increasing ticket costs or reducing fighter wage share even further than what is currently targeted.

It could also lead to discussions of spinning off the UFC into its own public company sooner rather than later. While there have been hints for some time now that a UFC IPO could be in the cards, there wasn’t much reason to believe that it would happen until late 2021, when provisions in Endeavor’s acquisition of Zuffa make it much easier to do. Should Endeavor’s mounting debt obligations become a serious problem, however, it could opt to raise equity through a public offering of the MMA promotion, which has much stronger financials that Wall Street could get behind.

In the end, Endeavor’s initial public offering came at a bad time. With uncertainty in the market and recession warning flags popping up, investors don’t have the stomach to risk their money on unicorn IPOs that may end up costing them. Given the embarrassment of having to withdraw its offering, Endeavor will certainly be making changes in order to repair its company image and build towards launching the IPO at a later date. Just how those changes will affect the company’s subsidiaries like the UFC, however, are unknown.