Maybe it was Efrain Escudero who deserved the pre-fight hype.

The undefeated Escudero (11-0) bested Phillipe Nover by unanimous decision to win the lightweight final at “The Ultimate Fighter 8” Finale on Saturday at the Palms Casino Resort in Las Vegas. All three judges sided with Escudero by matching 29-28 scores.

The 22-year-old Escudero grounded Nover (5-1-1) at will, as he neutralized his striking advantage with multiple takedowns in all three rounds.

“I knew Phillipe was a very good striker,” Escudero said. “I knew he was going to come out with that strong right. As soon as he threw it, I shot right under it.”

Escudero set the tone early, as he delivered his first takedown inside the first 30 seconds of the fight. He later mounted Nover and threatened with a choke from behind. The former emergency room nurse -- whom UFC President Dana White compared to a young Georges St. Pierre -- had no answer for Escudero’s well-timed attacks.

Nover, a Brazilian jiu-jitsu black belt based in Brooklyn, N.Y., bounced back with a strong third round, as he reversed Escudero with an omaplata and landed some ground-and-pound from a standing position. Still, it was not enough.

Bader (8-0), a two-time All-American wrestler at Arizona State University, clipped Magalhaes with an overhand right and sent the Brazilian tumbling to the canvas in the first round. He followed with strikes on the ground and forced the stoppage 2:18 into round one. Bader was content to remain on his feet, far away from Magalhaes’ world-class submission skills.

“Vinny’s a stud on the ground,” Bader said. “I was comfortable wherever the fight went, but I had kind of a lackluster fight [in my] last fight [on the show], and I wanted to keep it on the feet. I’ve been working on my boxing. I’m not just a wrestler, and I hope people see that.”

A product of the Arizona Combat Sports camp in Tempe, Ariz., the 25-year-old Bader has finished seven of his eight professional victories. Magalhaes (2-3), who showed improved striking during exchanges between the two, has dropped back-to-back bouts. 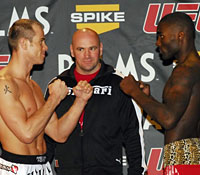 File Photo
Anthony Johnson's revenge
was swift and brutal.
The night’s most impressive finish belonged to a vengeful Anthony Johnson.

Five months after an inadvertent eye poke from Kevin Burns resulted in a loss and subsequent surgery, Johnson was vindicated. The athletic 24-year-old Georgian flattened Burns with a third-round head kick that left the former Victory Fighting Championship titleholder unconscious at Johnson’s feet 28 seconds into round three.

“I just really started working on my kicks about two months ago,” said Johnson, who trains alongside Strikeforce middleweight champion Cung Le. “It just happened. I just decided to throw it, and it connected.”

Johnson (6-2) appeared to carry the first two rounds with takedowns and ground-and-pound. In fact, the former junior college national wrestling champion spent virtually the entire second period softening Burns (7-2) with punches and elbows inside his guard.

One of the UFC’s most dynamic and physically gifted fighters, Johnson has delivered all three of his wins inside the Octagon by knockout. This one will be talked about for years.

Gouveia (12-5) dropped MacDonald with a straight left hand, pounced on his fallen foe and unleashed a string of wicked elbows from the top that sliced open the Canadian. Buried under the barrage, MacDonald (21-11) submitted to strikes 2:18 into the first round.

“The feeling to win a fight in the UFC is great. It’s unbelievable,” Gouveia said. “Jason is a really tough fight, and after this fight, I think I put myself in top contention.”

The 30-year-old Gouveia has won six of his last seven bouts, all six by knockout, technical knockout or submission. Even though he failed to make weight for his second bout as a middleweight, the Brazilian believes he has found a home at 185 pounds.

“I made some mistakes,” Gouveia said. “I want to apologize to the UFC, to Jason, all my fans, and I promise that it will never happen again.”

In a lightweight appetizer, Junie Allen Browning looked like a new man in his Octagon debut, as he submitted David Kaplan with a second-round armbar.

Browning (3-0), a lighting rod for controversy during his time on “The Ultimate Fighter,” dominated Kaplan from the opening bell. The finish came 1:32 into round two, as the 23-year-old Kentucky native scored with a takedown, passed Kaplan’s guard and sank the armbar.

Evidently grounded by his time at Xtreme Couture Mixed Martial Arts in Las Vegas, Browning fought at a measured pace. His work with revered striking coach Shawn Tompkins paid huge dividends, too, as he kept Kaplan (2-2) guessing with on-point footwork and battered him with a variety of strikes.

Afterward, he addressed his antics on the show. While his behavior nearly resulted in his being dismissed from the competition, many question whether or not it was choreographed.

“It wasn’t all planned,” Browning said. “It was just more the fact that I didn’t let the cameras dictate the way I was going to act. If someone messed with me, I just snapped. I wasn’t looking at the cameras and going, ‘Well, I’m going to pretend I’m someone else.’ I was like, ‘Well, if I’m going to get pissed, I might as well make it entertaining.’”