With the Oct. 20 demise of EliteXC parent company, Pro Elite Inc., one of the league’s brightest European fighters in Paul Daley has hit the market once again.

The man known as "Semtex" for his powerful hands went 3-1 in Pro Elite-run events, with his only loss coming to EliteXC welterweight champion Jake Shields via second-round armbar submission during its Oct. 4 event on CBS.

The 25-year-old Daley (18-7-1) had three fights remaining on his EliteXC contract, and though he is unsure of the logistics that agreement might hold for him, the Nottingham native has started to pursue opportunities with other organizations.

"I am considering fights in December in Canada, the UK or Holland and I am 99% sure I'll make a return to Japan in January 2009 for Sengoku,” Daley wrote in an e-mail to Sherdog.com. "As far as exclusive contracts go, I have nothing yet, as we are still trying to establish the legal jargon in my Pro Elite contract. But I hope to be fighting regularly in 2009 with a major U.S. promotion."

The former Cage Rage welterweight champion briefly retired in February 2008, only to re-join the ranks with a hometown comeback for Cage Warriors Fighting Championships last July before taking a crack at Shields.

Daley would not comment on any potential employment with the UFC, which looks to amp up its UK expansion plans in 2009. Daley was offered a three-fight contract with the organization in 2007, but turned it down to join EliteXC’s stable.

After his successful UFC 89 debut over highly experienced and very dangerous Japanese veteran Akihiro Gono on Oct. 18, welterweight Dan Hardy was rightfully pleased with his performance.

“Because of Gono’s experience, a lot of the usual tricks to trap opponents didn’t work, so he was hard to pin down and hit,” said the 26-year-old Nottingham fighter. “I did feel myself chasing him which was a little frustrating, but I’m a patient fighter so I didn’t rush in and expose myself too much. He was very elusive and unpredictable, so it was also hard to push the pace and land any quality combinations; all I could do was try and set him up and catch him with counters.”

Hardy had nothing but praise for the Zuffa-hosted event, which reportedly drew near 10,000 spectators to the National Indoor Arena in Birmingham, England.

“As far as the overall UFC experience goes, the organization was awesome,” said Hardy. “Everything ran like clockwork and the guys backstage work so hard to make sure the fighters have everything they need. The fans are also great, they are so welcoming and respectful and the made the atmosphere electric.”

Though Hardy believes he will fight again in early 2009, he hasn’t been doled out his next opponent yet. The UFC plans to return to Europe on Jan. 17 in Dublin, Ireland, where former Pride champ Dan Henderson will take on Rich Franklin in a middleweight main event. There has also been talk of the UFC returning to London as early as February.

When Pro Elite closed down operations last week, the fates of its satellite leagues King of the Cage, Icon Sport, and Cage Rage came into question.

Dave O’Donnell, one of the men behind the success of British promotion Cage Rage long before it was acquired by Pro Elite, seems to have an answer.

O’Donnell announced on Monday the formation of a new company, Cage Rage UK, which he says will resume promotional operations immediately.

“I can’t say too much about what has been going on behind the scenes -- but it has been brutal to see your pride and joy damaged,” wrote O’Donnell in a press release. “Ever since the news (of Pro Elite’s collapse) broke, the phones have been nonstop with would-be investors, but now is not the time to make rash decisions. All I can say is it’s back -- it’s British -- and better than ever.”

Cage Rage UK will hold its next event on Dec. 6 at the Troxy in London. The promotion is also in the midst of the first season of “Fighting Hurts,” a reality show not unlike “The Ultimate Fighter,” which hopes to discover the best British talent never to appear inside a ring or cage before. 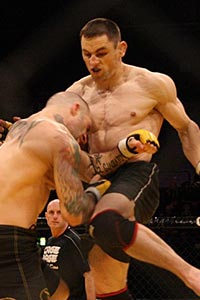 As previously reported, the Hero’s brand will be treated to a miraculous resurrection on Nov. 8 in the Lithuanian city of Vilnius and most of the fight card has now been announced by the Lithuanian Bushido Federation.

The marquee bout of the show so far is contested between Marius Zaromskis and experienced Polish submission fighter Jedrzej Kubski. Lithuanian knockout machine Zaromskis has spent the last three years of his career in England and was close to becoming a star for Cage Rage before his momentum was stopped by Englishman Che Mills in May.

Also on the card is an MMA tag team match, something that is unheard of in North American spheres, but very common in Japanese promotion ZST with which Bushido Lithuania works together closely. This time the home team of Erikas Petraitis and Eduardas Norkeliunas will take on Japanese duo of Kota Okazawa and Tetsuya Yamada.

What makes this event interesting is that there will be scouts from the Japanese promotion Sengoku in attendance and they will certainly be waving contracts under the noses of those fighters who win impressively.

It has been sixteen months since Frenchman Mohamed Khacha has last seen action inside the squared circle. At Fury FC 4 in Brazil, he knocked out eventual Sengoku veteran Fabricio “Pitbull” Monteiro in his own backyard. This personal highlight ended a four-fight winless streak, but Khacha has endured what seems like an endless list of injuries ever since.

The French “Ronin,” who has trained around the world at renowned academies like Black House in Brazil and American Top Team in southern Florida, is preparing for his comeback on Dec. 6 at Cage Rage “Bad Breed” in London. Crowd favorite “Momo” will square off against British fighter Edgelson Lua, who makes the move down to middleweight for the featured bout.

Polish promotion KSW has assembled a good mix of domestic talent and dangerous European fighters for its tenth event on Dec. 12 at Torwar in Warsaw. In its traditional light heavyweight tournament, Polish newcomers Michal Fijalka and Lukasz Wos will try to walk the same path that KSW stars Antoni Chmielewski and Jan Blachowicz have navigated before them.

Blocking that path will be a trio of hard-hitting foreigners: Dutchman Dave Dalgliesh, Germany’s Aziz Karaoglu in his second appearance in Poland, and fierce Italian striker Matteo Minonzio in his Warsaw debut. One more foreign and two domestic fighters are expected to round out the field of eight.

Italy’s New Generation Tournament has announced its second event of the year for Dec. 14. The fifth edition of Italy’s biggest MMA show will take place at the Palazzo dello Sport in Milan and feature a four-man heavyweight tournament, as well as a handful of European-flavored superfights.

The early favorite to take the heavyweight crown is Brazilian giant Jair “Sorriso” Goncalves. The 31-year-old Brazilian jiu-jitsu black belt is a hot prospect on the European scene right now and is looking to rack up two more wins in one night to end the year on a high note. His opponents will likely be Emil Poljak from Croatia, JÃ¼rgen Dolch from Germany and local hero Alfredo Achilli.

In featherweight action, Ciro Ruotolo will put his undefeated record on the line against dangerous and well-rounded Scotsman Paul Reed. There has been a war of words between the two that will likely play out in the ring. In a second 145-pound bout, Ahmed Chaidi and Stefano Cherubini will duke it out for the vacant title.

Last but not least, crowd favorite Paul “Hands of Stone” Jenkins will also return to the Lombardy. The crazy Welshman challenges Jeremy Horn and Travis Fulton as most active fighter in MMA with a purported 110 bouts. Jenkins particularly enjoys fighting under Pride rules, which are used at NGT.