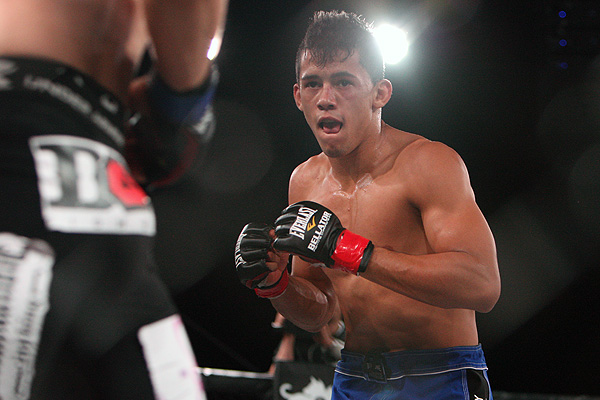 Eduardo Dantas remains one of the prized pieces of the Bellator puzzle. | Photo: Dave Mandel/Sherdog.com


Few fighters on the Bellator MMA roster hold as much value as Eduardo Dantas.

The world-ranked Dantas will defend his bantamweight crown against Strikeforce and World Extreme Cagefighting alum Anthony Leone in the Bellator 111 main event on Friday at the Winstar World Casino in Thackerville, Okla. Long hailed as one of the sport’s top prospect, the Brazilian has become one of the promotion’s cornerstones, and at 25, he may only be scratching the surface.

Spawned by the revered Nova Uniao camp, Dantas has rattled off eight wins in his last nine appearances. He has not competed since Bellator 89 in February 2013, when he bounced back from a highly publicized loss to Tyson Nam with a first-round knockout against two-time Brazilian jiu-jitsu world champion Marcos Galvao. Dantas has secured nine of his 15 career victories by knockout, technical knockout or submission. Wins over 1996 Olympic bronze medalist Alexis Vila and current Ultimate Fighting Championship competitors Zach Makovsky and Wilson Reis anchor his resume.

Leone reached the final of the 2013 Bellator Summer Series bantamweight tournament, losing a unanimous decision to Renovacao Fight Team’s Rafael Silva. However, when a knee injury left Silva unable to challenge Dantas, the 26-year-old Team Bombsquad representative was named as his replacement. Leone has won four of his past five bouts, including a December 2012 split decision over Makovsky at Bellator 83.

With the Dantas-Leone title fight on the marquee, here are 10 facts surrounding Bellator 111:

FACT 4: Alexander Volkov is one of three men to have held the Bellator heavyweight championship, along with Cole Konrad and Vitaly Minakov.

FACT 5: Mark Holata played football at the University of Tulsa, where he saw time as both a defensive tackle and fullback. He appeared in 12 games as a senior, rushing 17 times for 40 yards and catching 12 passes for 108 yards and a touchdown.

FACT 9: Sports Lab export Brent Primus has submitted all four of his foes with first-round rear-naked chokes. However, his four opponents own a combined record of 23-53.