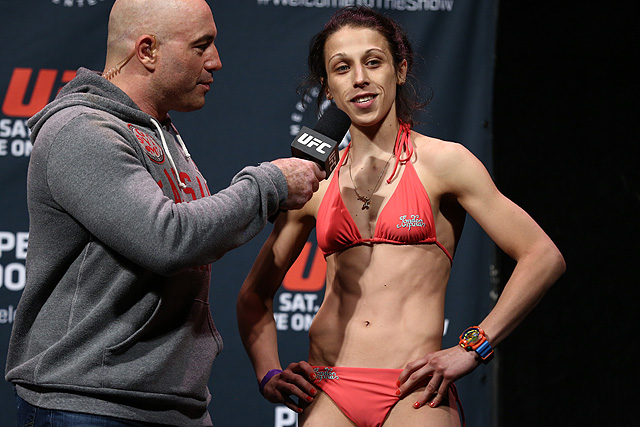 Joanna Jedrzejczyk is a fierce striker. | Photo: ADD A PHOTO CREDIT, TOO.


Jessica Penne could not have envisioned a quicker rise to prominence in the Ultimate Fighting Championship.

After just one Octagon appearance, the 32-year-old Alliance MMA representative will challenge reigning champion Joanna Jedrzejczyk for the women’s strawweight title in the UFC Fight Night “Jedrzejczyk vs. Penne” main event on Saturday at the O2 World in Berlin. There, they will vie for supremacy inside the UFC’s still-nascent 115-pound division.


Advertisement
Penne has rattled off five wins across her past six appearances, a submission loss to Michelle Waterson the lone hiccup. She made her promotional debut at “The Ultimate Fighter 20” Finale in December, as she walked away from her three-round encounter against Randa Markos with a split decision at the Palms Casino Resort in Las Vegas. A Brazilian jiu-jitsu black belt and former Invicta Fighting Championships titleholder, Penne has delivered nine of her 12 career victories by knockout, technical knockout or submission.

Jedrzejczyk enjoyed a rapid ascent to the strawweight throne. A decorated muay Thai practitioner, the 27-year-old Pole took a unanimous decision from Juliana de Lima Carneiro in July, captured a split verdict from Nova Uniao’s Claudia Gadelha five months later and put herself in position to meet Carla Esparza for the strawweight championship at UFC 185 on March 15. Jedrzejczyk then routed Esparza en route to a second-round TKO, claiming the 115-pound title in an early frontrunner for “Beatdown of the Year.”

With the Jedrzejczyk-Penne women’s strawweight title fight as the centerpiece, here are 10 facts surrounding the UFC Fight Night “Jedrzejczyk vs. Penne” card:

FACT 3: A black belt in Brazilian jiu-jitsu, judo and Shotokan karate, Australia-based Englishman Steve Kennedy has nine submission victories to his credit: two by rear-naked choke, two by triangle choke, two by armbar and one each by kimura, arm-triangle choke and north-south choke.

FACT 6: According to FightMetric figures, Piotr Hallmann has bested his opponents by a 335-183 margin in the total strikes landed department over his first four UFC appearances.

FACT 8: When American Kickboxing Academy export Noad Lahat made his promotional debut at UFC Fight Night “Shogun vs. Henderson 2” in March 2014, he joined Moti Horenstein as the only Israelis ever to compete inside the Ultimate Fighting Championship.

FACT 9: British prospect Arnold Allen, who turned 21 in January, is the fourth-youngest fighter on the active UFC roster.