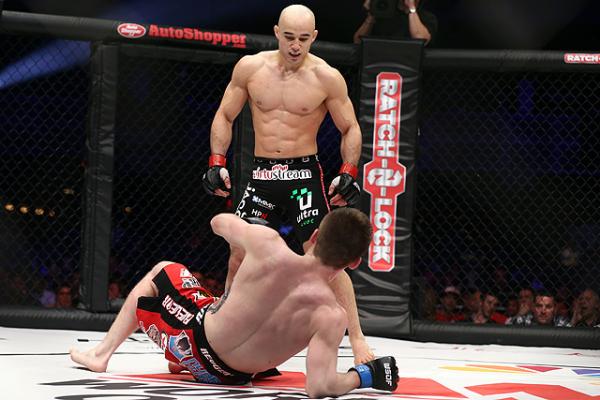 Bantamweight champion Marlon Moraes is a perfect 5-0 in the World Series of Fighting. | Dave Mandel/Sherdog.com


No fighter has raised his stock more through the birth of the Las Vegas-based World Series of Fighting promotion than Marlon Moraes.

The 26-year-old bantamweight champion will meet Cody Bollinger in the WSOF 13 main event on Saturday at the Sands Bethlehem Event Center in Bethlehem, Pa., and while his title will not be on the line, the stakes remain high for Moraes. The Valor Martial Arts-Ricardo Almeida Jiu-Jitsu representative finds himself on a seven-fight winning streak that has catapulted him to a world ranking at 135 pounds.

Moraes last competed at WSOF 9 in March, when he cruised to a unanimous decision over Josh Rettinghouse and retained his bantamweight crown in lopsided fashion. He has won all five of his fights under the World Series of Fighting banner, shedding his prospect label with a victory over former World Extreme Cagefighting champion Miguel Torres in November 2012. An accomplished muay Thai practitioner, Moraes has secured eight of his 13 career wins by knockout, technical knockout or submission.

Bollinger, who replaced the injured Josh Hill on short notice, will enter the cage on the strength of a three-fight winning streak. The 23-year-old last fought at WSOF 11 in July, when he submitted Pablo Alfonso with a first-round rear-naked choke at the Ocean Center in Daytona Beach, Fla. Bollinger squandered a golden opportunity in 2013, as he was dismissed from Season 18 of “The Ultimate Fighter” after failing to make weight for his quarterfinal bout against Anthony Gutierrez.

With the Moraes-Bollinger headliner as the centerpiece, here are 10 facts surrounding WSOF 13:

FACT 1: Nine of Keon Caldwell’s 11 career fights -- seven of his nine victories and both of his defeats -- have ended inside one round.

FACT 3: A protégé of International Fight League alum Jamal Patterson, Katlyn Chookagian won a Golden Gloves championship in Pennsylvania at the age of 16.

FACT 4: Renzo Gracie Jiu-Jitsu representative Daisuke Yamaji made his professional mixed martial arts debut on Aug. 19, 2006, returned on Oct. 2, 2010 and has not fought since.

FACT 7: Matt Secor appeared on Season 16 of “The Ultimate Fighter” reality series, losing a split decision to Michael Hill in the elimination round.

FACT 9: Brett Shoenfelt operates as part of the Power MMA Team in Arizona, where he has trained alongside “The Ultimate Fighter” Season 8 winner Ryan Bader, C.B. Dollaway, Aaron Simpson and Seth Baczynski.

FACT 10: Matthew Lozano hails from Lancaster, Pa., which is home to the Fulton Opera House. Built in 1852, it is one of three theaters in the United States designated as a National Historic Landmark.