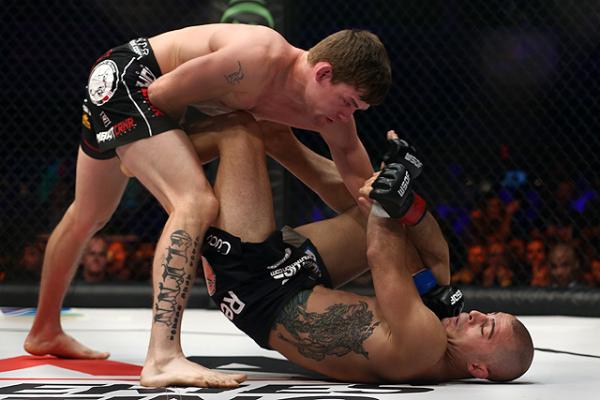 
Rick Glenn would like nothing more than to follow the lead of Roufusport stablemate Anthony Pettis, who defended his Ultimate Fighting Championship lightweight crown in spectacular fashion at UFC 181.

Glenn will put his World Series of Fighting featherweight championship on the line for the first time when he confronts once-beaten Team Alpha Male export Lance Palmer in the WSOF 16 co-main event on Saturday at the McClellan Conference Center in Sacramento, Calif.


Advertisement
The Milwaukee-based Glenn, 25, will carry an eight-fight winning streak into the match. He last appeared at WSOF 10 in June, when he forced Georgi Karakhanyan to retire following the second round of their encounter and claimed the 145-pound title. Glenn has secured 13 of his 15 career victories by knockout, technical knockout or submission, six of them inside one round.

A former Resurrection Fighting Alliance champion, Palmer bounced back from his only career defeat -- a guillotine choke-induced submission to the aforementioned Karakhanyan -- at WSOF 10, where he dispatched Nick LoBosco with a first-round rear-naked choke. The 26-year-old featherweight was a four-time NCAA All-American wrestler at Ohio State University.

With the Glenn-Palmer title clash as one of the drawing cards, here are 10 facts surrounding WSOF 16:

FACT 2: Released by the Ultimate Fighting Championship in 2013, Jon Fitch still ranks second on the promotion’s all-time list for total strikes landed by a welterweight with 2,039, according to FightMetric figures. Only Georges St. Pierre (2,523) has connected on more.

FACT 3: Undefeated Team Nogueira prospect Sheymon da Silva Moraes has compiled a perfect 6-0 record on the regional scene in Brazil and has done so against reasonable competition. The six men he has defeated have a cumulative 54-39-2 record.

FACT 6: David Mitchell has won all 15 of his fights outside of the UFC.

FACT 7: Six of Gabriel Solorio’s seven career defeats have resulted in submission: two by triangle choke, two by rear-naked choke and one each by brabo choke and guillotine choke.

FACT 8: When Strikeforce and EliteXC alum David Douglas steps into the cage for his WSOF debut, a total of 1,394 days will have passed since his most recent victory: a rear-naked choke submission on Nick Gonzalez on Feb. 18, 2011.

FACT 10: Dominic Waters was a qualifier on Season 16 of “The Ultimate Fighter,” losing a unanimous decision to eventual finalist Mike Ricci in the elimination round.