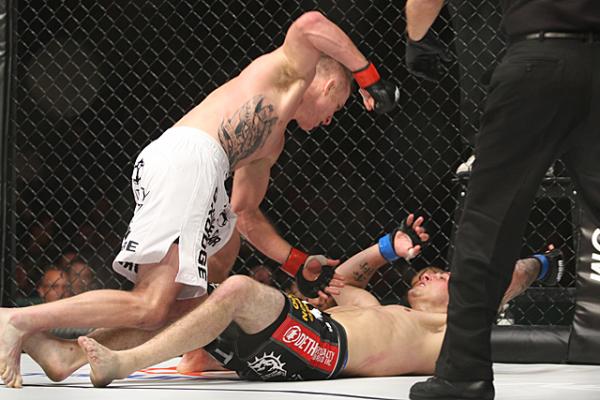 Justin Gaethje would like nothing more than to tighten his grip on the WSOF lightweight title. | Photo: Keith Mills


Justin Gaethje appears to have a stranglehold on the World Series of Fighting lightweight throne.

Gaethje will put his 155-pound title and perfect professional record on the line against Luis Palomino in the WSOF 19 main event on Saturday at the Comerica Theatre in Phoenix. The 26-year-old champion has raced out to a 13-0 record, with 11 finishes, establishing himself as one of the sport’s top lightweights operating outside the auspices of the Ultimate Fighting Championship.

Spawned by the Grudge Training Center in Colorado, Gaethje last appeared in a non-title affair at WSOF 15 in November, when he pocketed a split decision against an overweight Melvin Guillard at the USF Sun Dome in Tampa Fla. He captured World Series of Fighting gold a little more than a year ago and has successfully defended the belt once, stopping Nick Newell on second-round punches in July. Gaethje arrived on the WSOF scene in 2013 and has rattled off six straight wins since.

Palomino will enter the cage on a two-fight winning streak, having put away two-division Legacy Fighting Championship titleholder Jorge Patino and the previously unbeaten Lewis Gonzalez in back-to-back outings. The 34-year-old Peruvian invites firefights with his aggressive style and has delivered 13 of his 23 victories by knockout or technical knockout. Palomino has not been finished by strikes in more than seven years.

With the Gaethje-Palomino clash on the marquee, here are 10 facts surrounding WSOF 19:


FACT 1: The three men who have defeated Thiago Silva -- Alexander Gustafsson, Rashad Evans and Lyoto Machida -- own a cumulative record of 57-11-1.

FACT 2: Matt Hamill was a three-time NCAA wrestling champion at the Rochester Institute of Technology in Henrietta, N.Y., where he finished with a 99-3 career mark and still holds the all-time school records for pins (47) and winning percentage (.967).

FACT 4: A finalist in the Bellator MMA Season 3 bantamweight tournament, Ed West has held titles in the Rage in the Cage and Desert Rage Full Contact Fighting organizations.

FACT 5: Clifford Starks graduated from Arizona State University with a degree in kinesiology.

FACT 7: All 17 of Power MMA Team Team export Brendan Tierney’s fights -- 11 wins and six defeats -- have resulted in a finish.

FACT 8: Journeyman Eric Regan is 3-14 in fights that reach the judges.