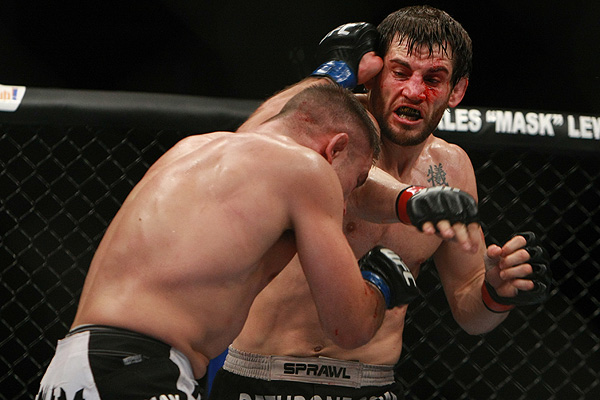 
Jon Fitch may not be the most popular fighter in mixed martial arts, but no one can deny the success he has enjoyed as one of the sport’s premier welterweights over the last seven years.

The longtime American Kickboxing Academy representative on Friday will make his promotional debut in the World Series of Fighting 3 main event, as he confronts fellow Ultimate Fighting Championship castaway Josh Burkman in a rematch at the Hard Rock Hotel and Casino in Las Vegas. Fitch submitted Burkman with a second-round rear-naked choke at UFC Fight Night 4 in April 2006.

A surprising addition to the World Series of Fighting lineup, Fitch was released by the UFC as part of an unexpected roster purge on Feb. 20. The former captain of the Purdue University of wrestling team, he compiled a stellar 14-3-1 record inside the Octagon, losing only to champion Georges St. Pierre, top contender Johny Hendricks and 2007 Abu Dhabi Combat Club Submission Wrestling World Championships gold medalist Demian Maia. Fitch exited the UFC ranked second on its all-time list in strikes landed (2,185), third in takedowns secured (58) and eighth in total wins (14).

Burkman, meanwhile, has enjoyed a resurgence since departing from the UFC following a decision defeat to Pete Sell in October 2008, posting a 7-1 mark in eight appearances. “The Ultimate Fighter” Season 2 alum will carry a four-fight winning streak into his rematch with Fitch. Burkman was at his best at WSOF 2 in March, when he put away Power MMA Team’s Aaron Simpson with a first-round knee strike and follow-up punches at the Revel Resort and Casino in Atlantic City, N.J.

With the second chapter of the Fitch-Berkman rivalry as the World Series of Fighting 3 centerpiece, here are 12 facts surrounding the event:

FACT: Burkman spent nine months in the military training to become an Army Ranger. As part of his indoctrination, he attended the United States Army Airborne School, where he learned to parachute out of airplanes. His service was short-lived, however, as the Salt Lake City native was dismissed after an altercation with an instructor.

FACT: A 32-year-old father of three, Jacob Volkmann is a licensed chiropractor and runs Volkmann Chiropractic out of White Bear Lake, Minn., 14 miles outside of Minneapolis.

FACT: Dan Lauzon, the younger brother of “The Ultimate Fighter” Season 5 graduate Joe Lauzon, became the youngest fighter to ever set foot inside the UFC’s Octagon when he lost to Spencer Fisher at UFC 64 at the age of 18 years, seven months and 14 days old.

FACT: Former Gladiator Challenge and Palace Fighting Championship titleholder Brian Cobb was outstruck 19-0 in his only UFC appearance, which resulted in a second-round technical knockout to Englishman Terry Etim.

FACT: Before he made his World Series of Fighting debut with a first-round technical knockout against Gregor Gracie, Tyson Steele had never fought outside of his native Canada.

FACT: Justin Gaethje, Joe Murphy, Krasimir Mladenov and Kendrick Miree are a combined 28-0, with 22 finishes between them.

FACT: Jerrod Sanders was an NCAA All-American wrestler at Oklahoma State University -- the same institution that spawned the careers of Couture, Hendricks, Mark Munoz and Daniel Cormier, among others.

FACT: Pennsylvania-based featherweight Jeff Smith is tied with his opponent, Sanders, for the longest winning streak on the World Series of Fighting 3 roster. The 25-year-old Sarasota, Fla., native has rattled off 10 consecutive victories since submitting to a John Salgado guillotine choke in his professional debut on Aug. 21, 2009.