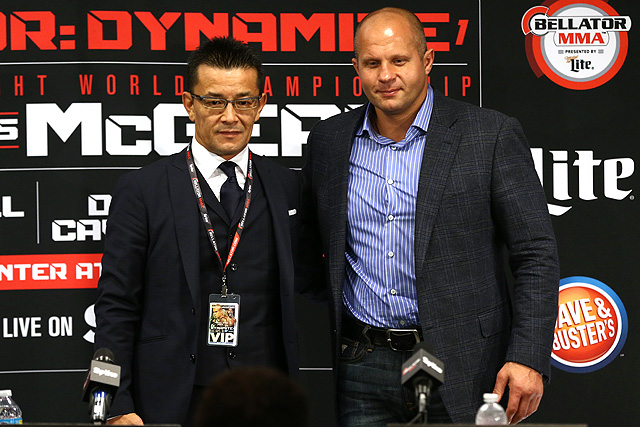 
From a pure athletic perspective, Fedor Emelianenko is like the Pee Wee Kirkland of mixed martial arts.

He is a streetball legend that never had the opportunity to prove his greatness on the NBA hardwood. When you find him in retirement several years after his career is over, languishing on some random corner of the earth living the above-average man’s life, he’s surrounded by childhood friends who spin tales about how he would have dropped 70 points on Michael Jordan on any given night.

However, when you ask this streetball legend, he shrugs and plays it cool. If you let him tell it, he never really wanted to be in the NBA to begin with; and when he says it, you begin to wonder if he really believes the yarn he’s spinning or if there’s a part of him that wasn’t quite ready for the league and lived in fear of being exposed. He was just happy to get this far without it happening to him.

Emelianenko is a bit different from Kirkland in that he wasn’t robbed of his freedom, nor was he enamored with the business of selling street pharmaceuticals. However, like Kirkland, when the opportunity to show and prove his talents in the big leagues presented itself, he turned and went the other way. Apparently, sometimes it’s better to speculate than to ever really know how good you are.


That’s exactly what “The Last Emperor” did when he waltzed out in a sports coat and some tight-fitting jeans during the Bellator 142 broadcast and announced that he would be joining forces with old friend Nobuyuki Sakakibara to fight in some unnamed promotion against an unknown opponent in Japan on one of those special New Year’s Eve shows. Whatever.

All that speculation that had us thinking we would finally see Emelianenko, who is well into his twilight years, finally test his mettle against the best heavyweights in the Ultimate Fighting Championship was exactly that -- speculation.

It surely felt like we were close, but in reality, all those smiley faces on Instagram and smug shrugs from UFC President Dana White meant a whole lot of nothing. When White said he had nothing to tell us at the UFC’s “Big Event” press conference, he meant it. We just didn’t want it to be true. How exactly does the supposed greatest mixed martial artist to ever walk the earth never compete in the biggest MMA organization? Sure, his run in Pride Fighting Championships was spectacular, but he never impacted the mainstream once MMA infiltrated ESPN and major sports outlets as something more than a niche activity like skateboarding or the Bassmaster Classic. It was time that the rest of the world, aka “casual fan,” got a chance to see this pudgy Russian guy about whom we had been gushing for more than a decade.

No, we will likely never see Emelianenko in the Octagon; and even if we did, chances are that we wouldn’t have cared nearly as much as we would have in his heyday. That’s OK, right? Not really, but we’ll accept it.

It makes sense that our collective hearts sank when Emelianenko made the stroll out on Spike TV. It was like “Oh, really?” We knew he was coming out of retirement, and once it seemed that Bellator MMA was out of play, it felt like the only destination that made fiscal and competitive sense was the UFC. It wasn’t an “if” but a “when.”

Honestly, Emelianenko arriving in the UFC in 2015 would have been like that Guns N’ Roses “Chinese Democracy” album that we waited for forever only to be let down once it finally was released 15 years after the band’s last studio album. We thought we wanted it, but we really didn’t.

That’s kind of what’s happening here with Emelianenko. We’re all upset because we’re wondering what could have been when the reality is that his sacred legacy might be better left in our imagination. Whoever he beats up in Japan on New Year’s Eve won’t hurt or help his legacy, and truthfully, none of that matters. The reign of the “The Last Emperor” ended in Strikeforce, where Fabricio Werdum triangle armbarred him, Antonio Silva bludgeoned him and Dan Henderson pounded him into oblivion. His three fights since were elevator music. This run sounds good today and will be met with an indifferent shrug in three months.

We can stop fooling ourselves. We don’t really want to see Emelianenko get punched out by Travis Browne, do we? If he were to ever make a UFC run, we’d want to see him compete for the heavyweight title in a rematch against Werdum at UFC 200. That’s all a fairy tale, though. Anything less would leave us empty.

So instead of crushing our hopes that he could make a Robbie Lawler-type run in the UFC, Emelianenko opted to go with the safer route. His memory is preserved, and we’ll still wonder “What if?” just like we do when we discuss the legend of Pee Wee Kirkland.

Because he never set foot in the UFC, he’ll be discussed in random MMA circles as a legend that could have destroyed every heavyweight the UFC had to offer. Arguments will be had 30 years from now about whether Emelianenko was the greatest mixed martial artist to ever roam the planet and not compete in the UFC. If it’s good enough for him, it will have to be good enough for us.