With the aspirations of an upstart mixed martial arts organization resting squarely on his shoulders, Fedor Emelianenko’s performance Saturday night will play a huge role in determining Affliction’s success.

That’s because the heavyweight championship of the world remains a huge feather in any promotional cap, especially in lieu of boxing’s inability to establish a clear successor to Lennox Lewis since he retired five years ago. It’s still the biggest prize in sports, and despite MMA’s booming growth, the UFC hasn’t been able to grab that kind of recognition with a heavyweight for an extended period of time since it became mainstream.

Affliction, and Fedor, could challenge all that and create an interesting set of paradoxes for both promotions to deal with, given how Fedor’s bout with Andrei Arlovski turns out.

That’s because the Russian phenom, recognized as the world’s finest heavyweight, is an elusive commodity whose services the UFC has been unable to secure. And in facing Arlovski, Sherdog.com’s No. 2-ranked heavyweight, it isn’t just a question of whether Fedor wins (or loses) but also how he performs that influences the likelihood of Affliction building a core fan base that can help it endure in these decidedly lean economic times.

As the UFC continues to power ahead in the wake of savage flameouts of rival promotions, it holds multiple advantages over Affliction in the ever-changing battle for the consumer’s pay-per-view dollar. UFC can program several months ahead (read below), has a huge edge in brand awareness among fans and a far deeper roster of talent with which to assemble fight cards and develop fresh rivalries, rematches and storylines.

Affliction, meanwhile, has but one high card in its hand -- Emelianenko -- and even the casual MMA fan might think twice about dropping $45 for a pay-per-view card largely comprised of ex-UFC fighters, few of whom competed, much less succeeded, for an extended period of time at the championship level.

Take a peek at Saturday night’s fight poster -- of the 10 fighters shown, seven are UFC vets. Recycling is a great idea when it comes to saving the Earth, but in building a new fight promotion, public perception is everything. Stacking a talent base with guys perceived to be UFC retreads (fair or not, this is the de facto conclusion some fans might reach) does not a successful promotion make. At least not when the nation is headed for 10-percent unemployment and a severe shrinkage of disposable consumer spending. 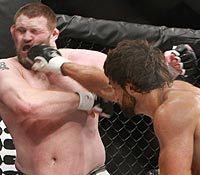 Dave Mandel/Sherdog.com
Will Arlovski be Fedor
Emelianenko's greatest test?
However, despite these challenges, Fedor could be the force that puts Affliction on firmer ground. At 28-1 (with one no-contest), he has amassed a record of startling consistency, underscored with a penchant for highlight-reel destructions. In his July 19 debut with Affliction, he dispatched former UFC heavyweight boss Tim Sylvia in 36 seconds. It was a huge win for both the fighter and the promotion, but with a bare heavyweight cupboard beyond Arlovski, Fedor can win while Affliction loses. Here’s how the case-by-case scenario breaks down:

A short-term win for Affliction, which must then dig up another live body for Fedor. Arlovski is clearly one of the most talented heavyweights in the world -- and in dismantling any chance of a rematch, Fedor’s victory immediately jacks up the price for the services of any top-level heavyweight. If this happens, the UFC would be smart to sign as many heavyweight prospects as possible, while retaining veteran names to keep them in-house.

An exciting fight that Emelianenko wins

The perfect outcome for Affliction, as it can build on this scenario to draw more customers for a future PPV card while buying time to build its brand. It’s very possible that Arlovski gives Fedor a good go, as he has the tools to do it. With potent hands, athleticism and good takedown defense, Arlovski will do the promotion a favor by giving Fedor a tough fight. Outside of Josh Barnett (who faces Gilbert Yvel on the card), there’s nobody on Affliction’s roster that would rate better than a 10-1 underdog against Fedor. That’s why the way this fight plays out is so important.

A small setback for the company, but it can build toward a quick rematch (see above). If this happens, however, it deals a critical blow to Emelianenko’s bargaining position down the road with the UFC. As Affliction’s survival seems to be on a month-by-month basis, seeing their marquee attraction lose doesn’t do them a lot of favors. Plus, if Arlovski wins, you can almost hear the quotes coming out of Dana White about how Fedor lost to a former UFC champ.

Arlovski in a blowout

Hard to fathom, but if anybody’s got the goods to send Emelianenko packing, it’s “The Pitbull.” He has dangerous hands, a renewed training regimen and will be three inches taller with a lot of options to unload. Hot and cold at times, when Arlovski is dialed in, he delivers destructive shots. Emelianenko’s grappling game is so superb that you can just about forget beating him in a ground-grinding match, but he does have a tendency to wade in throwing haymaker shots. If this happens, mute the TV, open the door and point your ear toward Vegas -- you’ll hear the high-pitched cackle of the Zuffa executive brass enjoying a hearty, competitor-crushing laugh.

The reason Fedor’s showing is so important is that a massive vacuum has existed in combat sports for five years -- because there is no widely recognized heavyweight champion. And as the sweet science has lacked a captain of its flagship division, the prize is there for the taking. It’s not going to be assumed Saturday night, regardless of what happens, but with the emergence of Brock Lesnar in the UFC (who’ll have to fight Frank Mir to settle who owns the UFC belt), a Lesnar-Fedor fight down the road might be so big that everyone involved has to blink and let the cash cow happen.

The problem with that scenario is that the UFC has a much deeper talent base and can wait it out while Affliction battles for survival. Check the programming dates of upcoming fight cards, both pay-per-view and cable, and it’s easy enough to understand how Affliction faces the dual challenges of recurring programming that draws in viewers, along with getting a date where there isn’t already a show -- MMA or otherwise -- that could potentially suck away viewers. Held at the Honda Center in Anaheim and co-promoted by Golden Boy, the Affliction show already has to deal with the weird byproduct of another Golden Boy-affiliated event at the Staples Center in L.A., the Antonio Margarito-Shane Mosley bout on HBO.

It doesn’t get any easier in the coming months. The UFC is already ginning up the schedule with PPV shows on Jan. 31 and March 7 and with cards on Spike Feb. 7 and 21. Whatever the crossover factor is between potential boxing and MMA conflict, it stands to reason that at least a few potential MMA buyers also contemplate sweet science PPVs, and with about one per month in that sport, Affliction could literally get squeezed out unless the cards fall in a very specific way.

The hard truth of it is that boxing, which has been ripe for the taking for years, still hasn’t consolidated its mess of belts to produce a successor to Lennox Lewis. That five-year gap in lineage between recognized heavyweight champions is the longest in the sport’s history since John L. Sullivan started the chain in 1885.

Boxing has always had the heavyweight champion and the attendant spoils of ownership. Whether it was the memorable bouts waged between Muhammad Ali and Joe Frazier or the Evander Holyfield-Mike Tyson rivalry, the sport could always fall back on the massive booster shot of heavyweight bucks to give itself a surge (illegal bites notwithstanding).

The PPV industry was largely built around heavyweight boxing as it came into maturation in the 1980s, and today’s model is sorely lacking in heavyweight attractions. Wladimir Klitschko owns two barely meaningful belts, his brother Vitali has the third, with another Russian, Ruslan Chagaev, holding the fourth. There are no contenders of note for either Klitschko to tangle with, and Wladimir’s recent performances have been one-sided beatings -- the bad kind that make you immediately erase the recording and reminisce about the division’s better days.

Boxing’s biggest prize is ready to be taken, if only someone will emerge with the badass quotient and requisite big-stage fury and permanently tip the scales so that when the subject of who is the heavyweight champ comes up around the water cooler, the geek in Accounts Receivable will name someone in MMA.

That’s why Fedor’s performance is more than just a fight. Affliction’s very health depends on it. Forget about the constant quibbling between White and Fedor’s management, who’ve been at odds since the organization was unable to sign him last year. And with Lesnar’s fight-by-fight improvement revealing him to be every bit the monster he was billed to be, someone could emerge as the Mike Tyson of MMA. It’s all a matter of how the baddest heavyweight in the world performs Saturday night and whether or not he generates the necessary traction to motivate the powers that be to make it happen.

Promotional rivalries aside, the biggest prize in sports -- the heavyweight title and the windfall that comes with it -- is there to be taken.