WILMINGTON, Mass. -- World Championship Fighting crowned featherweight Dan Ferrer as its first champion in front of its largest crowd to date at WCF 6 on Saturday at the Aleppo Shriners Auditorium.

The roughly 3,900 on hand responded with silence as hometown boy Dan Bonnell, based out of Renzo Gracie New Hampshire, was caught by a persistent kimura from Ferrer 2:48 into the opening period. The loss was deflating for Bonnell (6-5), who has been prominently featured on all six WCF cards, as well as a WCF television show that premiered on local cable two weeks ago. The show highlighted Bonnell as a personality and featured his 19-second knockout win against Joe Cushman in September.

Ferrer (7-3), 23, who fights out of Providence, R.I., said he came in ready to duck a right from Bonnell and finish it on the mat.

“Everything went according to the gameplan,” he said. “I knew he was going to try to knock me out with that big right hand. I was practicing to time it, shoot underneath and then take him out on top where I’m at my strongest. I’m always looking for the first-round submission.”

The fight capped the latest effort from promoter Joe Cavallaro, the WCF founder and a longtime friend of UFC President Dana White. Cavallaro said every available ticket for WCF 6 was sold, exceeding the turnout for a heavily publicized WCF show in February 2008 that saw White and the Tapout crew in attendance. 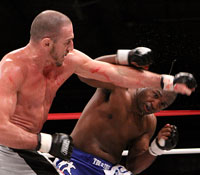 Joe Harrington/Sherdog.com
Mike Dolce took
out Nuri Shakir.
With just about every notable New England-bred fighter on hand at WCF 6, including Kenny Florian and Marcus Davis, one personality stood out from them all. Quinton "Rampage" Jackson was in the house to corner Mike Dolce, whom he coached on season seven of “The Ultimate Fighter.” Dolce splits his time training with the former UFC light heavyweight champion at the Wolfslair Academy in England and UFC middleweight Nate Quarry in Oregon.

Dolce (4-6) picked up a drawn-out technical knockout win over grizzled New England mixed martial arts veteran Nuri Shakir, who has faced a cadre of MMA notables, including Thiago Alves, Marcus Davis and Nick Thompson. The crowd grew restless as the first round moved slowly, with both fighters getting a sense of each other’s timing.

Shakir (13-16) landed jabs and a punch that cut Dolce above the right eye before the New Jersey-born fighter answered by wobbling Shakir with a shot that sent him stumbling against the ropes and put him in a position to be swarmed. The referee was compelled to step in, perhaps a bit too early, and Shakir protested to the crowd. A ringsider yelled to the referee: “Go back to [expletive] K-Mart, you loser!” The end came 2:25 into round two.

As he lay on a mat backstage getting stitches after the show, Dolce said he got what he wanted out of the fight.

“It was good kind of getting out some ring rust,” he said. “I wanted to start off slow. I didn’t want to come out there and just pull the trigger. I’ve got a lot of fast knockouts on my record, and that’s what got me in trouble. I got a lot of losses trying to take guys’ heads off.”

Shakir said he wished Dolce had come into their fight with that frame of mind.

“I would rather somebody come in there and knock me out and put me on my ass to where I’m dazed and I’m done,” he said. “This fight, I didn’t feel like I was out. I felt like I was dazed. I didn’t think I was out.”

The two featured bouts capped an eventful, at times nerve-wracking, evening. In a fight between Scott Rehm and Stephen Stengel, the burly Rehm lifted his opponent and dropped him at an awkward angle, stacking Stengel on his shoulder and neck. Stengel was prone, as Rehm (4-2) fired in punches before the referee could step in.

Stengel (1-1) was on the mat for several minutes, cursing and complaining of pain in his lower back. His neck was stabilized with a brace and he was loaded onto a stretcher, his brother and mother looking on from ringside. Cavallaro said reports from the hospital were that Stengel suffered primarily a shoulder injury and should be OK.

The moment put a momentary damper on the crowd’s enthusiasm, but a slate of hard-fought scraps got it back quickly.

In the “Fight of the Night,” Greg Rebello, cornered by Kenny and Keith Florian, took a riotous unanimous decision from Shawn DePaul. The fight featured several eventful trades, with Rebello (6-1) landing hard kicks toward the end. DePaul (0-2) proved game, controlling the early portion of the bout, but he ended up being penalized a point for grabbing the ropes to prevent being taken down.

WCF 6 attendees also got a glimpse of an MMA newcomer with big upside, as Rick Hawn -- who competed in judo at the 2004 Athens Olympics -- won his second pro fight with a sudden right hand that brought down Billy Flynn 72 seconds into the first round. Hawn (2-0), who trains striking with the esteemed Mark DellaGrotte at Sityodtong, did not get a chance to use any of his judo against Flynn (0-1).

“I’ve been working on my hands,” Hawn said. “It’s still new to me, this whole MMA thing.”

World Championship Fighting returns to Wilmington, Mass., on May 29.