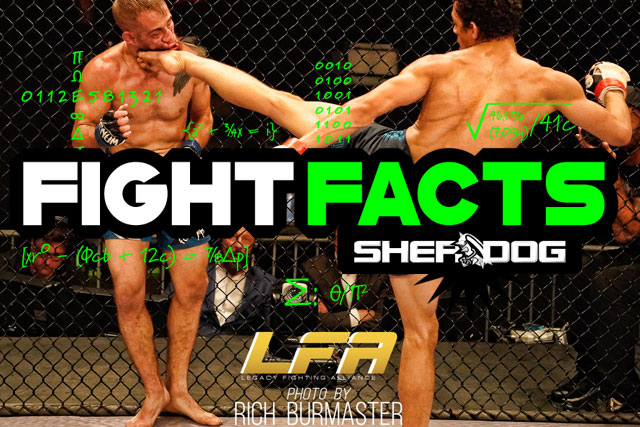 The Legacy Fighting Alliance on Friday went down to Texas for the 11th time, as it made its debut in the city of Beaumont and brought an action-packed card to the Beaumont Civic Center. LFA 43 featured a couple of highlight-reel knockouts, one of the latest stoppages in company history and the incredibly rare occurrence of a fighter missing weight in the heavyweight division.


NOT MESSING AROUND: Three of the last five main events for the LFA have ended by first-round knockout, including Brendan Allen’s faceplant-inspiring knockout of Larry Crowe.

I KINDA LIKE IT HERE: Appearing for the fifth time inside the LFA cage, Allen tied four other fighters for the second-most LFA bouts. Only Damon Jackson (six) has more. No fighter with at least five fights under the LFA banner has won them all.

0 NO MO’: Of the three fighters to come into LFA 43 undefeated, only Jake Heffernan ended his night with an unblemished record, as both Desiree Yanez and Joel Moore were finished in the first round.

AIN’T NO GRAVES: Cameron Graves scored the latest stoppage in LFA featherweight history and the fourth-latest stoppage victory in LFA history, as he knocked out Jordan Titoni with a head kick and follow-up punches at 3:38 of Round 3. Graves’ win was only the eighth knockout in company history to come from a head kick.

NO MAN’S LAND: Weighing in over the lightweight limit at 158.8 pounds, Kolton Englund has now fought at a catchweight between 156.5 and 164 pounds in six of his eight career bouts, including all four under the Legacy Fighting Championship or LFA banners.

DO OR DIE: In five career bouts, Itzel Esquivel has never fought beyond the second round, with all three of her wins coming by submission.

CLOSE BUT NO CIGAR: Joel Moore came in above the heavyweight limit, missing weight by 0.4 pounds. He became the first fighter in LFA history to miss weight for a heavyweight bout.

NOTHING BUT RESPECT: Coming into his unaired preliminary bout against Joel Scott, Jeremiah Castillo had 30 career losses -- more than every fighter on the main card combined (28). On the other hand, Castillo’s 12 total wins were also the most of any fighter at LFA 43, with no one else holding more than 10.

KRYPTONITE: With 30 losses under his belt, Castillo made his LFA debut with the most career losses of any fighter in LFA history. His submission loss to Scott marked the 20th time Castillo had been submitted.