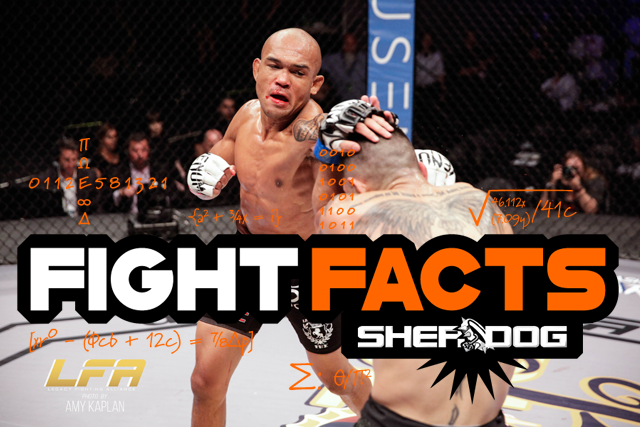 Touching down in Phoenix for the fourth time, the Legacy Fighting Alliance on Friday brought with it a flurry of frenetic fights. LFA 44 featured the first leg kick stoppage in company history, a couple of undefeated fighters who never leave their fate in the hands of the judges and the fifth-fastest finish ever recorded under the LFA banner.


KEEP THE STREAK ALIVE: Richard Palencia, Keoni Diggs and Mario Bautista all came in to LFA 44 undefeated, and they each left the same way. On the other side, Kevin Wirth suffered his first career setback against Palencia, while A.J. Robb came in at 1-0 and also tasted defeated for the first time.

GET ON THE SCALE, SON! GET OFF THE SCALE!: Over the last five LFA events, 11 bouts have taken place outside of normal weight classes, accounting for 20.7% of the total fights in that span. Palencia and Wirth met at a 130-pound catchweight, while Darrius Flowers and Anthony Rozema competed at a 175-pound catchweight.

FRINCE CHARMING: Picking up a competitive and exciting decision win over Christian Aguilar in the main event, Matthew Frincu notched his fourth win inside the LFA organization. His victory moved him into a second-place tie for the most wins in company history with Maikel Perez, Maycee Barber and Nate Jennerman.

JAWAIIAN PUNCH: Kamuela Kirk submitted Boimah Karmo in the first round of their encounter. All but one of his eight career wins have come by first-round stoppage, with the other coming at 0:42 of Round 2. “The Jawaiian” has not won a bout that went past that mark, as his two career losses have come by decision.

LEG DAY: For the first time in LFA history, a fighter finished an opponent with leg kicks, as Diggs stopped Andy Varela in the second round of their contest.

DIGGING DEEP: Lifting his record to 6-0, Diggs has now finished all six of his opponents before the final bell.

IT’S-A-ME, MARIO: Although only five fights into his professional career, Bautista has started strong at 5-0 with five stoppages. He has never fought beyond the second round.

PROTECT YA NECK: By submitting Robb via guillotine choke, Bautista executed the fifth successful guillotine choke submission inside the LFA’s bantamweight division -- the most for any weight class.

BEAST MODE ACTIVATED: Registering the fifth-fastest finish in LFA history, “Beast Mode” Flowers dusted Anthony Rozema in 22 seconds on the untelevised preliminary card. Only one of the top five fastest finishes in LFA history has been shown on TV, with the rest occurring before AXS-TV started broadcasting the cards.

NEVER SAY NEVER AGAIN: Coming into LFA 44, Wirth had never been defeated (five fights), Tyler Bialecki had never been knocked out (15 fights) and no Legacy Fighting Alliance event had ever ended with the final three fighters on the card winning by decision.