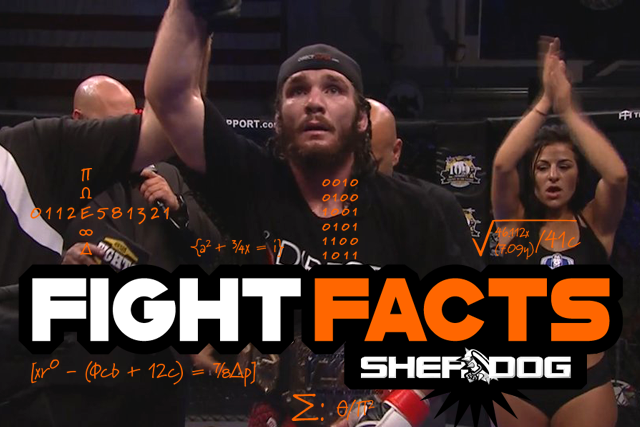 Fight Facts is a breakdown of all the interesting information and cage curiosities on every card, with some puns, references and portmanteaus to keep things fun. These deep stat dives delve into the numbers, providing historical context and telling the stories behind those numbers.

Staging an event in Virginia for the first time, the Legacy Fighting Alliance on Friday brought a card to the troops that led to several wild results. LFA 46 featured the most significant clash of undefeated fighters in the company’s history, a 31-second barnburner you had to see to believe and a controversial stoppage that undoubtedly delighted longtime Pride Fighting Championships fans.

HIGHEST OF STAKES: The combined record of 18-0 between main event fighters James Nakashima and Kyle Stewart represents the highest number of combined wins without a defeat in any fight in LFA history.

BRIGHT FUTURE: In defending his belt for the first time, Nakashima became the sixth fighter in promotional history to successfully retain a title. The previous five fighters that defended their championships -- Andrea Lee, Jeff Hughes, Kevin Aguilar, Ricky Simon and Robert Watley -- have all left to compete in either the Ultimate Fighting Championship, Professional Fighters League or Dana White’s Tuesday Night Contender Series.

WHEN IT ALL FALLS DOWN: Coming into his welterweight title fight against Nakashima, Stewart carried an undefeated record of 10-0. His loss broke the longest undefeated streak of a fighter that has ever competed inside the LFA cage.

ESTABLISH DOMINANCE: Nakashima remains undefeated through nine professional bouts, but all nine of his wins have come by decision. Only one of those decisions was ruled a split verdict, as he defeated Derrick Krantz at LFA 23 to capture the promotion’s welterweight championship.

YOU CAN CALL ME THE UNDERDOG: Although he was knocked out in eight seconds during his appearance on Dana White’s Tuesday Night Contender Series on June 12, Dashawn Boatwright still came in as a -800 favorite against Cristhian Torres (+500). However, Torres put Boatwright to sleep with a huge uppercut, scoring an upset with betting odds similar to that of Frankie Edgar’s first encounter with B.J. Penn at UFC 112.

THIS ISN’T PRIDE: While Ahmet Kayretli appeared to stop Shaun Spath with a stomp to the body in the second round of their contest, stomps to grounded opponents are prohibited under the Unified Rules of MMA, as well as the rules adopted by the Virginia Advisory Board of Boxing, Martial Arts and Professional Wrestling. Spath, who also serves as an MMA referee, has already announced he intends to appeal this loss to the board, which could change the loss to a disqualification win under its regulations (18 VAC 120-40-411.20(M, N)).

PUGILISTIC PANDEMONIUM: The 31 seconds of mayhem between Mumia Abu Dey-Ali and Mitch Aguiar resulted in the second-fastest knockout in LFA welterweight history; it sits in a three-way tie for the 10th-fastest LFA stoppage of all-time.

ALWAYS GOOD TO SEE: LFA 46 featured five decisions, all of which were decided unanimously, becoming the first event in the promotion’s history to feature at least five decisions with no dissenting scorecards from any judge.

NEVER SAY NEVER AGAIN: Coming into LFA 46, the Legacy Fighting Alliance had never held an event in the state of Virginia, no fighter in LFA history had ever been stopped with a stomp (Spath) and no event had ever featured three consecutive bouts resulting in clean knockouts.