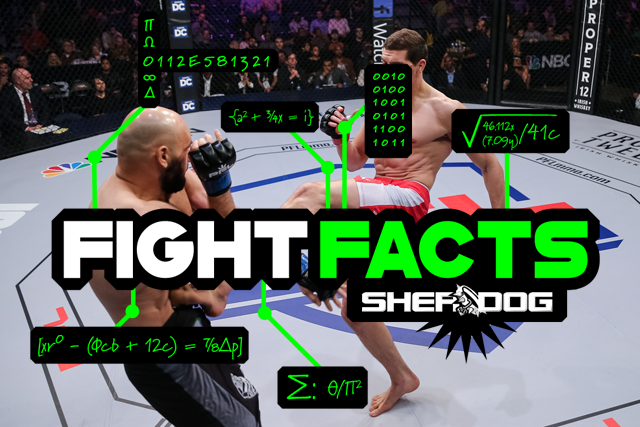 The Professional Fighters League wrapped up its last round of quarterfinal and semifinal bouts at PFL 10, where welterweights and middleweights competed on Saturday at St. Elizabeths East Entertainment and Sports Arena in Washington, D.C. The event featured a breakthrough knockout artist on a mad dash for the $1 million prize, a fighter who had to say “Matte!” and more draws than any other show in the company’s history.

NO TIME FOR SUDDEN DEATH: Featuring a whopping four draws, PFL 10 established a company record in the category. This event alone had more draws than the entire history of the organization prior to this tournament. In comparison, no event in Ultimate Fighting Championship history had more than two draws, which happened at UFC 22 and 216.

WE’RE ON A MISSION FROM GOD: Wrapping up the quarterfinals and semifinals of the PFL 2018 playoffs, five of the six No. 1 seeds advanced into the finals, with only heavyweight top seed Francimar Barroso losing before the final round.

YOU’VE BEEN REPLACED: After completing the playoffs up to the finals, six different fighters across five weight classes stepped in to replace fighters in the tournament. None of those six replacement fighters won their fights, although Abubakar Nurmagomedov drew with Bojan Velickovic and advanced. However, he was forced to withdraw due to a hand injury.

ON THE ONE HAND: At welterweight, Ray Cooper III stormed through the competition with two first-round knockouts of Jake Shields and another against Handesson Ferreira to secure his spot in the final. Facing him will be Magomed Magomedkerimov, who never left any doubt by beating Pavel Kusch on the scorecards and then knocking out replacement Velickovic to fight for the prize.

AND ON THE OTHER: The middleweight division proved to be more complicated, with Abusupiyan Magomedov advancing on a draw to Gasan Umalatov and then smothering Sadibou Sy to become a finalist. His opponent will be Louis Taylor, who decisioned Rex Harris before reaching the final thanks to an unfortunate foul that caused a draw, advancing him on a technicality.

THE INTERNATIONAL LANGUAGE: With an international field of competitors representing at least 10 different countries, only three countries have fighters remaining in the PFL 2018 finals: the United States (six), Russia (three) and Brazil (three). Additionally, Russian-born Magomedov fights out of Germany.

DEATH RAY: In all four of his appearances inside the PFL cage, Cooper III has knocked out his opponent. With his two finishes at PFL 10, Cooper III moved into a tie with Brian Foster and Hakeem Dawodu for the third-most knockouts in World Series of Fighting-PFL history, trailing Marlon Moraes with five and Justin Gaethje with nine.

DOUBLE DAMAGE: Cooper III joined Foster as the only other fighter in the history of the organization to knock out two opponents on the same night.

FULL SPEED AHEAD: Cooper III has finished his opponent within two rounds in all 17 of his wins, and he has only gone into the third round one time in his 21-fight career. He lost a 2017 decision to PFL 10 adversary Ferreira.

GOT SOME ‘SPLAININ’ TO DO: The middleweight semifinal between Taylor and John Howard ended abruptly at 4:58 of Round 2, where Taylor landed a knee to Howard’s head while the UFC veteran was down. As Howard could not continue and the fight was beyond its midpoint, it went to the judges’ scorecards, where it was inexplicably scored a technical draw. Since playoff fights must have someone advance, Taylor won the tiebreaker by winning the first round and made it into the final after landing an illegal knee to stop his opponent.

OUT ON HIS SHIELD: After getting knocked out by Cooper III, Shields has registered four losses inside the WSOF-PFL cage, tying him with six other fighters for the second-most losses in promotional history, all behind Mike Kyle with six.

LIKE CLOCKWORK: Reaching the scorecards and drawing with Sy, Bruno Santos has fought to the final bell in 19 of his 21 career bouts and has not finished an opponent since September 2008. For reference, the last time Santos finished a fight, nine of the other 15 fighters on the PFL 10 card had not yet made their pro debuts.

NEVER SAY NEVER AGAIN: Coming into PFL 10, Velickovic (25 fights) and Ferreira (15 fights) had never been finished, no fight in WSOF-PFL history had been scored a technical draw and no fighter had ever been forced to verbally submit in a fight (Rick Story).