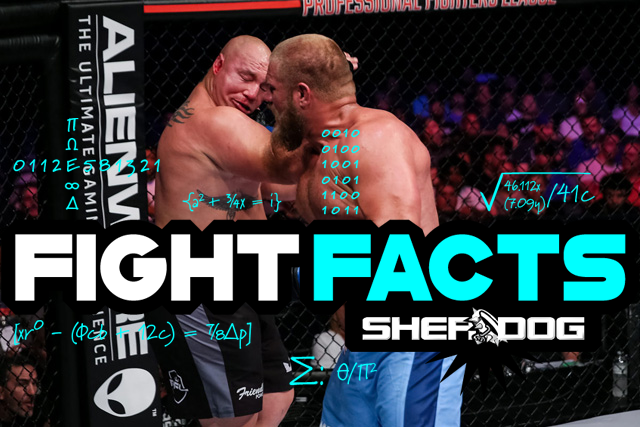 
Fight Facts is a breakdown of all of the interesting information and cage curiosities on every card, with some puns, references and portmanteaus to keep things fun. These deep stat dives delve into the numbers, providing historical context and telling the stories behind those numbers.

In the fourth iteration of the PFL 2018 regular season, featherweights and heavyweights were on display, bringing a card ending with a continually high finish rate of 70 percent -- and featuring a fighter with one of the longest active unbeaten streaks in mixed martial arts, the second-fastest submission in company history and only the third neck crank submission in World Series of Fighting-Professional Fighters League history.

MOVING ON UP: With the majority of the featherweight and heavyweight playoff pictures set, two fighters so far have scored two first-round finishes to earn the maximum 12 points -- Steven Siler and Francimar Barroso.

OH LOOK, A DELI MEAT! At heavyweight, the clinching fighters are: Barroso, Kelvin Tiller, Philipe Lins, Jack May, Alex Nicholson, Valdrin Istrefi and Jared Rosholt. The final spot at heavyweight should be decided when Jake Heun and Caio Alencar square off.

SURE THINGS: With the main and co-main event winners coming in as -1375 and -1100 favorites, respectively, all three fighters closing as betting favorites above -500 prevailed at PFL 4 (Max Coga won at -560).

SIR LANCE-A-LOT: Appearing for the 10th time under the WSOF-PFL banner, Palmer is now tied for the second-most bouts with David Branch and Justin Gaethje. Only Marlon Moraes has more with 11. Palmer also recorded his seventh win with the company, and now sits alone with the fifth most wins in organization history.

LANCE PALMSTRONG: Tapping Jumabieke Tuerxun with the third neck crank in company history, Palmer recorded his 8th career win by submission. Palmer has neither stopped an opponent nor been stopped with strikes in his career.

IN TIME FOR THE AFTER-PARTY: By submitting Tuerxun in 4:34 of the third round, “The Party” scored the seventh latest stoppage in WSOF-PFL history, and the second latest in a non-title bout.

APPLY YOURSELF: Despite a record celebrating 20 wins, Tuerxun has only defeated two fighters with five or more wins on their resumes. The 21 opponents he has beaten or drawn with in his career had a combined record of 61-32-5, and only 10 of those 21 have had winning records.

HARD NOT TO TALK ABOUT IT: Beating Malegarie by decision, Harrison improved his stellar undefeated record to 19-0. His career unbeaten streak is one of the longest among active fighters in major organizations, trailing only a few including: Khabib Nurmagomedov (UFC), Vitaly Minakov (ex-Bellator), Aziz Pahrudinov (One Championship next week), and Yaroslav Amosov (Bellator).

ANYPLACE, ANYWHERE, ANYTIME: Despite weigh-in snafus that changed his opponent to Bekbulat Magomedov on 24-hours’ notice, Valiev knocked Magomedov out of the tournament while picking up his eighth win inside the Decagon -- the most for a fighter currently on the roster and the fourth most all-time.

HE SWEPT THE LEG: With the referee waving off the bout due to damage to Daniel Gallemore from leg kicks, Valdrin Istrefi earned the fifth leg kick stoppage victory in company history.

IT MAKES SENSE EVENTUALLY: Sidelined by a medical suspension from his first fight at PFL 1, Heun was not yet cleared to compete in his second fight of the heavyweight tournament, keeping fellow heavyweight Alencar out as well.

At featherweight, Idrisov and Coville could not yet compete in their second bouts of the featherweight qualifiers, and each were replaced. Both of those replacement fighters missed weight and were pulled from the card, and as a result, Magomedov and Valiev were matched up the day before they were supposed to fight.

WISE TO YOU THIS TIME: Allowing the fighters to walk out to music of their choosing at PFL 4, Rosholt selected an old favorite from wrestling drama “Vision Quest” -- Lunatic Fringe’s “Red Rider” -- a song that he also walked out to in seven of his eight UFC appearances. When accompanied by the song inside the Octagon, Rosholt had a decent record of 5-2, although he lost by submission to Tiller at this event.