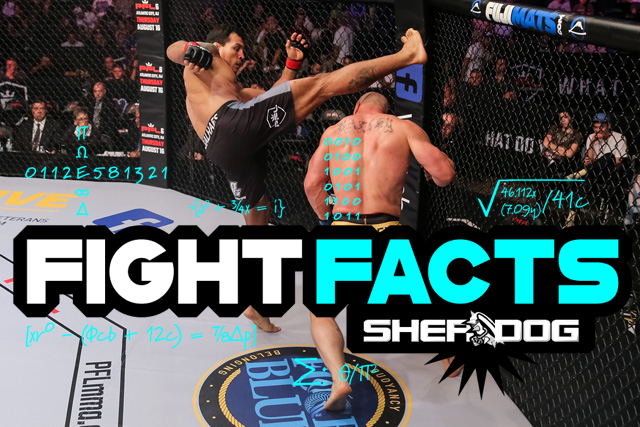 Returning to the Nassau Coliseum in Uniondale, New York, for the second time in as many events, the Professional Fighters League on Thursday brought the final regular-season bouts for lightweights and light heavyweights to The Empire State. PFL 5 featured a light heavyweight favorite racking up the maximum number of points in the opening round, the first time a fighter has lost by technical submission in back-to-back fights and a return to form from a participant on the brink of elimination.

TOP OF THE TOP: By knocking out Brandon Halsey inside one round, Vinny Magalhaes became the third fighter to win both of his regular-season bouts by first-round stoppage, joining featherweight Steven Siler and heavyweight Francimar Barroso.

TOUGH BREAK AFTER TOUGH BREAK: Only five of the original 12 light heavyweights competed in their second fights, with the other seven not clearing medicals. Newcomer Alibulatov was brought in to give Dan Spohn a second fight.

THIS TIME IT’S FOR REAL: Although High’s bout with Escudero at PFL 2 was marred by controversy when the referee appeared to stop the fight early, there was no doubt this time around. High went to sleep in Natan Schulte’s rear-naked choke in the main event. High became the first fighter in World Series of Fighting-PFL history to lose twice by technical submission.

The top light heavyweight seed is locked up by @VinnyMMA! Here are the standings after #PFL5. #PFLmma pic.twitter.com/LTKZCWXmfi

LET’S GET TECHNICAL: Schulte’s rear-naked choke resulted in the 10th technical submission in company history and the fourth to occur in the main event. Although rear-naked chokes are the most performed submissions by far, twice as many fighters have been rendered unconscious from guillotine chokes than rear-naked chokes.

IT PAYS THE BILLS: After outpointing Robert Watley to earn a spot in the lightweight tournament, Will Brooks has now recorded nine of his last 10 wins by decision. His lone finish in that stretch was a fourth-round knockout of Michael Chandler for the Bellator MMA lightweight championship in 2014.

LESS THAN FIRM: In dropping a decision to Rashid Magomedov, Firmino suffered the fourth loss of his WSOF-PFL career, tying him with six other fighters for the most defeats in the history of the promotion.

FROM ZERO TO HERO: On the brink of elimination, Chris Wade tapped Kawana with a first-round guillotine to earn six points. In doing so, Wade became the first fighter to lose his first fight and then stop his second opponent in the first round.

WE KNOW WHAT JOE ROGAN WOULD SAY: After landing multiple kicks to Spohn’s groin, Alibulatov caused an end to the fight with another low blow at 56 seconds of the third round. When a fight goes beyond its midpoint and ends in a foul, it goes to a technical decision and the judges score the fight up to that point. This was the second technical decision in WSOF-PFL history -- an event that first occurred at WSOF 4 in 2013, when Lewis Gonzalez landed an elbow to the back of Antonio McKee’s head and still won.

DIVERSITY IS AN OLD, OLD WOODEN SHIP: Although he did not win by preferred means, Spohn now has 18 career wins: seven by knockout, six by decision and five by submission. Each of his last three victories have come by a different method, with one by arm-triangle choke, one by technical knockout and one by technical decision.

YOU ELIMINATED YOURSELF: In both of his bouts in the PFL, Escudero has significantly missed weight. In his first bout at PFL 2, he missed by six pounds and managed to win but could not earn any points. At this event, Escudero missed by 7.2 pounds, and he was removed from the card and the tournament. Opponent Islam Mamedov was awarded three points and the win.

NEVER SAY NEVER AGAIN: Coming into PFL 5, Watley had never lost a decision (12 fights), Kawana had never lost a fight within the first two rounds (21 fights) and Schulte had never put a fighter to sleep with a submission (15 fights).