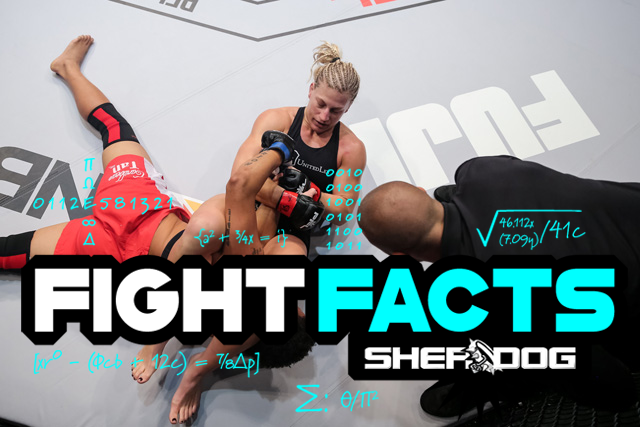 Returning to Atlantic City, New Jersey, for the first time since WSOF 5 in 2013, Professional Fighters League brought the second stage of the opening round of the welterweight and middleweight tournaments. The event featured the quickest win in World Series of Fighting/PFL history, the incredibly rare occasion where no betting underdog scored an upset and a team that dominated the entire night.

ALL ACCORDING TO PLAN: All 11 fighters that closed as betting favorites in their respective bouts won at PFL 6, with the bout between Jake Shields and Herman Terrado closing as a pick-em with virtually even odds.

NOT LUCKY IN THIS CASE: PFL 6 featured seven bouts that went the distance, the most of any tournament event to date by far, with no other event in the 2018 Regular Season having more than four bouts end by decision.

TIME WASTED CAN NEVER BE REGAINED: Six of Cooper’s 10 knockout victories have occurred in the first minute of the first round, following his 18-second knockout of Kusch.

LIKE A WRECKING BALL: Kayla Harrison became the second female fighter in company history to record multiple victories, joining Jessica Aguilar, after she stopped Jozette Cotton with strikes in Round 3.

THE FAMILY THAT SLAYS TOGETHER, STAYS TOGETHER: Picking up his sixth victory under the WSOF/PFL banner, Abubakar Nurmagomedov, cousin and adopted brother of UFC lightweight champ Khabib Nurmagomedov, now holds the third most wins with the promotion among fighters currently on the active roster. He trails Timur Valiev (8) and Lance Palmer (7).

JO-WOW: When he submitted Yuri Villefort in the third round with a quick rear naked choke, Joao Zeferino picked up his 16th career submission victory. His previous 15 submission wins had all taken place inside the first round.

THIS AIN’T OVER, GRINDER: Earning a decision win over John Howard, Bruno Santos has gone the distance in each of his last 17 bouts, winning 15.

THE ONES WHO HELP TO SET THE SUN: Knocking out Anderson Goncalves in the first round, middleweight Abusupiyan Magomedov became the fourth fighter in the tournament to notch two first-round finishes and earn the maximum total of 12 points. Only featherweight Steven Siler, light heavyweight Vinny Magalhaes and heavyweight Francimar Barroso have also accomplished this feat.

NEVER SAY NEVER AGAIN: Coming into PFL 6, Cotton had never been stopped (9 fights), Minus had never been defeated (10 fights) and Westin had never lost a fight that made it to the scorecards (13 fights).