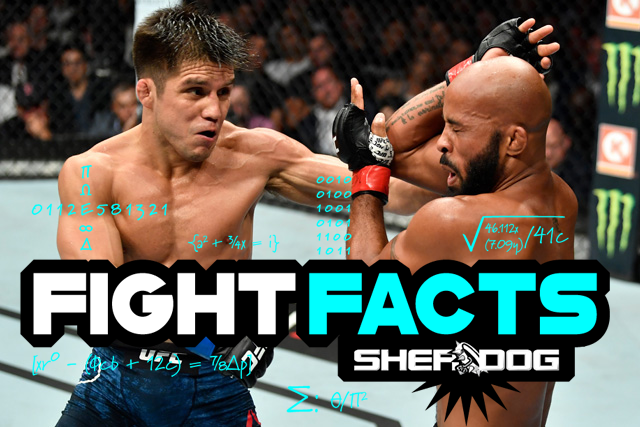 Returning to Los Angeles for the fifth time, the Ultimate Fighting Championship on Saturday brought two major title rematches and high drama to the Staples Center. UFC 227 featured the second biggest betting upset inside the Octagon this year, a fighter who has earned a quarter of all post-fight bonuses awarded to his entire division and a Brazilian contender who only needs one way to finish his opponents.

A BANTAM IS A SMALL CHICKEN: Of the 12 fights at UFC 227, only one was contested in a weight class above featherweight. The average weight of all the fighters on the card was 136.2 pounds, which made this event among the lightest of any in UFC history.

CONNECT FOUR: For the fourth time in T.J. Dillashaw's career, he has amassed a four-fight win streak. Dillashaw has never won five straight, starting his career at 4-0 before getting knocked out by John Dodson at the TUF 14 Finale. Dillashaw has rebounded from every career loss with four straight wins, only to lose the next one.

SAVE THE BEST FOR LAST: UFC 227 became the first event since UFC 202 in 2016 to award its three post-fight bonuses to participants in the final three bouts on the card.

T.J. DOLLASHAW: In earning a “Performance of the Night” bonus for his first-round knockout of Cody Garbrandt in the main event, bantamweight champion T.J. Dillashaw has now won seven post-fight bonuses in his last eight fights -- a run that dates back to his first title victory over Renan Barao in 2014. Dillashaw has been awarded a post-fight bonus in every one of his title fights.

BETTER TO GIVE THAN TO RECEIVE: Owner of seven first-round knockouts in his 11 career wins, Garbrandt was on the receiving end of a first-round finish for the first time in his career.

UPSET SPECIAL: Scoring the second largest betting upset of 2018 in the UFC, Cejudo closed as a +375 underdog against the -470 favorite Demetrious Johnson. He trails only Paul Craig (+550) and his literal last-second submission win over Magomed Ankalaev (-800). Cejudo’s victory was the biggest upset in a title fight since Rose Namajunas (+500) knocked out Joanna Jedrzejczyk (-700) for the women’s strawweight crown at UFC 217 in November 2017.

BUSTED: When Cejudo defeated Johnson by split decision in the co-headliner, he ended several “Mighty Mouse” streaks. Johnson had successfully defended his title 11 consecutive times, the most in UFC history. Johnson was also on a 13-fight winning streak inside the Octagon, tied with Georges St. Pierre and Jon Jones for the second longest streak of all-time.

LONG LIVE THE KING: The inaugural UFC flyweight champ, Johnson’s title reign lasted 2,142 days, or a little over five years and 10 months. When Johnson first won his UFC belt with a split decision over Joseph Benavidez at UFC 152, women had not yet made their debut inside the Octagon. His title reign ranks as the second longest in UFC history and trails only Anderson Silva’s middleweight reign, which lasted almost a year longer.

HUMAN TARGET: The last six fighters who have finished Swanson in the UFC or World Extreme Cagefighting have won post-fight bonuses for putting away the durable Californian. That list now includes Carneiro, who earned a “Performance of the Night” bonus after submitting Swanson with a rear-naked choke.

IT MEANS ‘IRON LADY’: Polyana Viana Mota, aka “Dama de Ferro,” who dropped a unanimous verdict to J.J. Aldrich on the main card, has been outpointed in both of her professional losses. Viana has stopped her opponent in all 10 of her wins and has never won a fight that went beyond the second round.

INSTANT CONTENDER: Signed by the UFC after he put Kevin Gray to sleep with an anaconda choke on Dana White’s Tuesday Night Contender Series, Alex Perez routed Jose Torres in a first-round technical knockout to become the first Contender Series alum to notch three wins inside the Octagon.

CHOP TOP, HE SAYS I’M GONNA WIN BIG: Dillashaw made his walk to the Octagon with “Can’t Stop” by Red Hot Chili Peppers blaring through the arena for the ninth recorded time. Dillashaw has a stellar record of 8-1 while using the track, stopping his opponent in five of those eight wins.

IT GOES WITH EVERYTHING: For the fifth time, Johnson walked out to “Who Gon’ Stop Me” by Jay-Z and Kanye West. He suffered his first defeat while accompanied to the cage by the track. This time, Johnson mixed in “Guile’s Theme” from the beloved fighting game “Street Fighter 2.”

I WISH I HAD MY OWN THEME MUSIC: For the 12th recorded time, Thiago Santos walked out to a custom track titled “Marreta Da CCD Para o Mundo” by Brazilian MC Isaac Saradinho. Santos has won nine of those bouts, including seven by knockout.