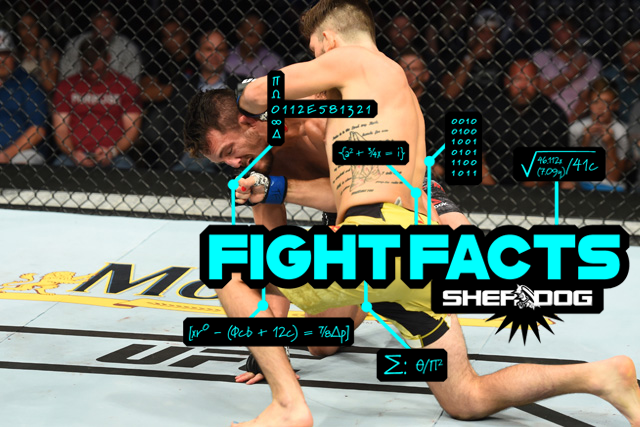 In visiting the capital of The Cornhusker State for the first time, the Ultimate Fighting Championship brought an event that all but guaranteed action from start to finish -- and it delivered. UFC Fight Night 135 on Saturday in Lincoln, Nebraska, featured one of the few fighters in history to start his promotional run with four straight bonus-winning appearances, a knockout not seen since UFC 1 and the first fighter to ever defeat a pair of brothers inside the Octagon.

LIGHT AT THE END OF THE TUNNEL: For the fifth consecutive UFC event, no fighter missed weight. Dating back to UFC Fight Night 133 in July, this is the longest stretch of events without a fight taking place at a catchweight since the run that occurred between UFC Fight Night 91 on July 13, 2016 and UFC 202 on Aug. 20, 2016.

GIVE THE PEOPLE WHAT THEY WANT: In each of the last four UFC main events, the winning fighter has knocked out his opponent within the first two rounds and earned a “Performance of the Night” bonus for his victory.

NOMENTUM: One fighter in each of the final four fights of the night came into his or her respective bout on two-plus-fight losing streaks: Justin Gaethje, Michael Johnson, Cortney Casey-Sanchez and Jake Ellenberger. Of those four fighters, three rebounded with victories. Only Ellenberger suffered another defeat.

WHERE WE’RE GOING, WE DON’T NEED JUDGES: Including his dramatic first-round knockout of James Vick in the main event, Gaethje has secured 17 of his 19 career victories by stoppage.

RUNNING OUT OF SUPERLATIVES: In his fourth fight inside the Octagon, Gaethje earned his fifth post-fight bonus for his quick knockout over Vick. In doing so, he became the fourth fighter in UFC history to start off his UFC career with four bonus-winning fights, joining Tyson Griffin, Thomas Almeida and Lando Vannata.

TALE OF TWO CAREERS: The main event marked Vick’s first appearance on the UFC marquee, and in his 10 previous appearances in the organization, he had never even been featured as high as the co-headliner. As for his opponent, three of Gaethje’s four UFC appearances have been main events. Gaethje also served as the headliner in six of his 10 World Series of Fighting appearances.

FLIPPING ELLENBERGERS: By knocking out Ellenberger in the first round, Bryan Barberena became the first fighter in UFC history to record wins over a pair of brothers. Barberena made his UFC debut in 2014 with a third-round knockout of Joe Ellenberger, Jake’s twin brother.

DON’T YOU KNOW WHO I AM?: Despite holding a 2-9 record over his final 11 UFC bouts, with seven of those losses coming by stoppage, Jake “The Juggernaut” Ellenberger fought on the main card in 10 of those 11 appearances and headlined the preliminary card of UFC on Fox 18 in 2016.

ALL GOOD THINGS …: Starting his career in the UFC strongly at 8-2, Ellenberger ended his run with the promotion heading in the opposite direction. He announced his retirement in front of a home crowd following his loss to Barberena, and despite his late-career setbacks, the Nebraskan finished with a solid 31-15 record, with 19 wins coming by knockout and six others by submission.

CAN’T FIGUEIREDO HIM OUT: Deiveson Figueiredo knocked out John Moraga in the second round to remain undefeated at 15-0. The Brazilian flyweight boasts 13 finishes among those 15 wins.

CALLING ANDRES CANTOR: With his incredible soccer kick knockout on Tim Williams, Eryk Anders scored the second such KO inside the Octagon. The only other of its kind in the promotion was the very first fight in UFC history, as Gerard Gordeau knocked out Teila Tuli at UFC 1 and sent one of his teeth into the crowd.

FOREGONE CONCLUSION: Anders came into his bout as the -1200 favorite against Williams, a +775 underdog and, after a close fight, won by third-round knockout. Anders tied Desmond Green as the biggest betting favorite of the year so far. Green was a -1200 favorite when he fought Gleison Tibau at UFC Fight Night 131 in June. Williams at +775 was the biggest underdog of 2018, with Tibau closing at +600 against Green.

PICK UP YOUR BAG OF CASH ON THE WAY OUT: In a thrilling clash with Iuri Alcantara, Cory Sandhagen escaped a dire submission threat and scored a second-round knockout while earning a “Fight of the Night” bonus for his efforts. With his win, Sandhagen became the first fighter to ever stop Alcantara with strikes in his 46-fight career. Alcantara’s only prior TKO loss came when he injured his leg in a bout in 2007.

I’M YEAH YEAH, BRO By dispatching Luke Sanders via heel hook, Rani Yahya picked up his 20th career submission win. Yahya has never stopped a fighter with strikes, electing to submit his opponents whenever he has finished them.

THAT’S ALL OF THEM, RIGHT?: In his 20 submission victories, Yahya has submitted his opponent in 12 different ways: armbar, arm-triangle choke, brabo choke, Ezekiel choke, guillotine choke, heel hook, keylock, kimura, north-south choke, Peruvian necktie, rear-naked choke and triangle choke. He has used no one maneuver to submit an opponent more than four times.

NEVER SAY NEVER AGAIN: Entering UFC Fight Night 135, the UFC had never traveled to the city of Lincoln, Nebraska, Joanne Calderwood had never submitted an opponent (14 fights) and Warlley Alves had never been knocked out (14 fights).

CALL IT ‘OPERATION WANG CHUNG,’ WHY DON’T YOU?: Ellenberger walked out to instrumental track “Sirius” by progressive rock band The Alan Parsons Project and lost. In five recorded uses of “Sirius,” fighters hold an unfortunate record of just 1-4 while accompanied by the track, and they have been stopped in three of those losses.