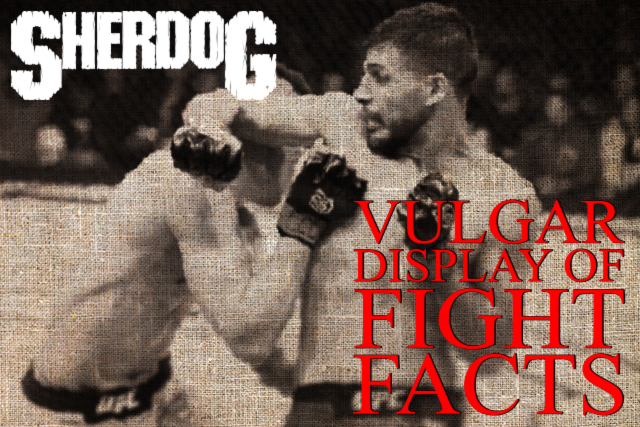 
Fight Facts is a breakdown of all of the interesting information and Octagon oddities on every card, with some puns, references and portmanteaus to keep things fun. These deep stat dives delve into the numbers, providing historical context and telling the stories behind those numbers.

With UFC Fight Night 139 on Saturday in Denver, the Ultimate Fighting Championship went back to where it all began. The card was one for the history books, as it featured one of the most sensational knockouts of all-time, a record-setting win for a certain “Cowboy” and a debuting fighter who appears dead set on becoming the promotion’s youngest-ever champion.

25 YEARS: Two days before the UFC officially celebrated its 25th anniversary, the promotion returned to the city that played host to its first event. The UFC has now put on 4,866 fights across 456 events, featuring 1,592 knockouts/technical knockouts, 1,072 submissions and 2019 decisions -- a finish rate of about 54.9 percent.

THE GREAT DENVER TRENDKILL: UFC Fight Night 139 was the 10th event the UFC has held in the Greater Denver area, starting with UFC 1 in 1993. When combining events in Broomfield, Colorado, and Denver, the UFC has been to this area more than almost every city -- excluding Las Vegas -- in the world. It is now tied with London.

CLASH WITH REALITY: With four bouts receiving split verdicts from the judges, UFC Fight Night 139 tied nine other events for the third-most split decisions at an event in promotional history. UFC Fight Night 79 in 2015 and UFC 222 earlier this year both had five.

RIGHT ON THE EDGE: In knocking out Chan Sung Jung with one second remaining in the fifth round, Yair Rodriguez scored the latest finish in UFC history, tying Demetrious Johnson’s armbar submission of Kyoji Horiguchi at UFC 186 in 2015. It was the latest knockout in UFC history and broke the record set by Cain Velasquez, who knocked out Junior dos Santos with a slam and follow-up punches at 3:09 of Round 5 at UFC 166 in 2013.

GOOD FRIENDS AND A BAG OF CASH: Rodriguez earned “Fight of the Night” and “Performance of the Night” bonuses totaling $100,000 for his victory over Jung, earning the first double bonuses after a win since Brian Ortega submitted Cub Swanson at UFC Fight Night 12 in December 2017.

BONUSMAKER: After earning two bonuses for his win, Rodriguez has banked five bonuses in his last five fights and six in his eight career UFC bouts.

I’M BROKEN (BUT NOT BROKE): Jung became the fourth fighter in UFC history to be on both the winning and losing ends of bouts that earned a fighter double bonuses. He won “Fight of the Night” and “Performance of the Night” honors for his brabo choke submission of Dustin Poirier in 2012. Jung joins Dan Henderson, Edson Barboza and Ronda Rousey in accomplishing this feat.

HARD RIDE: In losing by fifth-round knockout, Jung became the second fighter in UFC history to lose fights in both the fourth and fifth rounds. Jung was stopped by Jose Aldo in Round 4 at UFC 163 in 2013. Previously, Renan Barao lost by fifth- and fourth-round knockout to T.J. Dillashaw in 2014 and 2015.

DOMINATION: With his win over Mike Perry, Donald Cerrone now has the most wins in UFC history with 21, breaking a tie with Georges St. Pierre and Michael Bisping.

COWBOY FROM HELL: By finishing Perry in the first round, “Cowboy” earned his 15th stoppage victory in the Octagon, the most of any fighter. He surpassed Anderson Silva and Vitor Belfort.

WE’LL GRIND THAT AXE FOR A LONG TIME: Cerrone made his 29th appearance in the UFC, tying him with Bisping and Jeremy Stephens for second-most on the all-time list behind Jim Miller. By comparison, Jung made his first UFC appearance almost two months after Cerrone made his, but he has only competed inside the Octagon six times.

PROUD TO BE LOUD: Cerrone’s first-round armbar of Perry earned him a “Performance of the Night” bonus for his efforts, and by winning that bonus, he moved into third place all-time for the most bonuses received in organizational history. Only Nate Diaz and Joe Lauzon have earned more, with each winning 15 in their respective careers. With that bonus, Cerrone tied Charles Oliveira and Conor McGregor, all of whom have won six “Performance of the Night” bonuses throughout their UFC careers.

MEDICINE MAN: The oldest fighter on the card at 35, Cerrone made his MMA debut with a first-round triangle choke over Nate Mohr in 2006. Fellow UFC Fight Night 139 competitor Maycee Barber was only 7 years old at the time but had already been training in martial arts for four years.

THE ART OF SUBBING: Despite a reputation for powerful striking, Cerrone has submitted his opponent in exactly half (17) of his wins (34). He did not score his first knockout until his third fight inside the Octagon and 20th in his career, as he stopped Charles Oliveira in 2011.

MAYCEE IS HER NAME: Barber made an emphatic UFC debut when she stopped Hannah Cifers in the second round with elbows and punches. Barber improved her undefeated record to 6-0. She has stopped five opponents, the last three with elbows.

BLUE FACE TURNIN’ RED: Referee Tim Mills intervened to call a stop to the bout between Bobby Moffett and Chas Skelly, and the former was controversially awarded a submission victory via bravo choke following a replay review. It was the sixth brabo choke in UFC history to be ruled a technical submission.

STRENGTH BEYOND STRENGTH: In dispatching Julian Erosa in 46 seconds, Devonte Smith earned his ninth career win, and all nine have come by stoppage. His lone career loss -- also a finish -- was a third-round technical knockout to fellow UFC Fight Night 139 competitor John Gunther.

RESPECT, WALK: For all 29 of his UFC bouts, Cerrone has made his walk out to the Octagon with “Cowboy” by Kid Rock. After he extended his own record for the most uses of a walkout song by a single fighter, the track now has the highest winning percentage (.724) of any song with over 20 uses in UFC history.

FLIPPIN’ HOSTILE: Accompanied with “The Champion” by Carrie Underwood featuring Ludacris, Barber became the first recorded fighter in UFC history to ever walk out to an Underwood song. Barber won by second-round TKO.