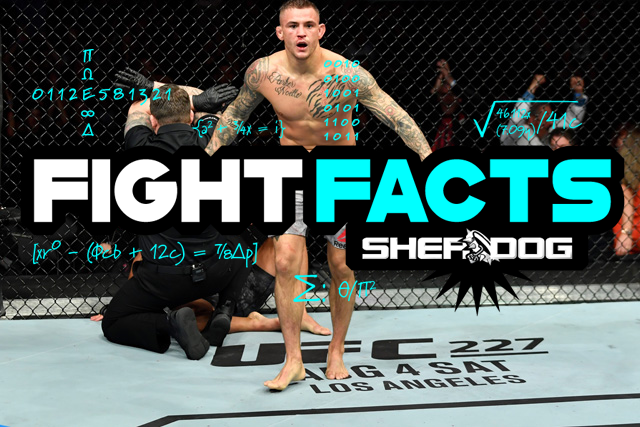 Returning to Calgary, Alberta, for the first time since the UFC 149 debacle in 2012, the Ultimate Fighting Championship on Saturday brought a card to Canada that virtually guaranteed to deliver action; and deliver it did. UFC on Fox 30 featured the first non-title fight for a former champion in more than nine years, a potential future title contender racking up bonus money and a fighter who proudly represented the signature look and theme song of Calgary’s own “Hitman.”

GUARANTEED FIREWORKS: Coming into their rematch, Dustin Poirier and Eddie Alvarez had each gone the distance seven times in their respective careers. They held a combined finish rate of around 77 percent.

HE’S ON FIRE: For the fourth time in his last five appearances, Poirier earned a post-fight bonus for his efforts. The only fight in that stretch that failed to earn him some bonus money was his first meeting with Alvarez, which resulted in a no-contest.

NO BELT, NO PROBLEM: Competing in a non-title bout for the first time since 2009, Jose Aldo ended his streak at 14 consecutive title fights -- the longest run of its kind in UFC-World Extreme Cagefighting history.

THEY ALWAYS BOUNCE BACK: In losing to Aldo by first-round technical knockout, Jeremy Stephens suffered his 14th defeat inside the Octagon -- the most of any fighter in the promotion’s history. Meanwhile, Ross Pearson’s loss to John Makdessi was his 12th inside the Octagon, tying him with Gleison Tibau and Joe Lauzon for second on the all-time list.

STAYING POWER: Competing in his 29th bout under the UFC lights, Stephens tied Jim Miller and the recently retired Michael Bisping for the most appearances in Ultimate Fighting Championship history.

BET THE ‘OVER’: Of the last 15 bouts featuring fighters from women’s divisions, 13 have gone the distance, with just one TKO and one submission. Both finishes occurred at “The Ultimate Fighter 27” Finale.

LONG-DISTANCE TURNAROUND: In going the distance for the 12th time in her 13-fight career, Tecia Torres dropped a decision to Joanna Jedrzejczyk. She has lost back-to-back bouts for the first time as a professional but still has never been finished. All three of her losses have resulted in decisions.

FOUR ON THE FLOOR: Kahan Johnson suffered the 12th defeat of his career when he submitted to a first-round armbar from Islam Makhachev. He has now lost four times each by knockout, submission and decision.

TARGET ANGRY: By knocking out Gadzhimurad Antigulov in 4:25, Ion Cutelaba now boasts 12 first-round stoppages among his 14 professional wins. “The Hulk” has only fought beyond the first round four times in his 18-fight career.

SCROOGE MAKDESSI: Makdessi earned the first bonus money of his 15-fight UFC career in his decision win over Pearson.

LIKE THE FELLA ONCE SAID …: Dustin Ortiz became the second flyweight in company history to knock his opponent out with a head kick when he cut down Matheus Nicolau Pereira with a head kick and follow-up punches. Ryan Benoit was the first.

RULE OF THREE: When Devin Powell put away Alvaro Herrera with a body kick, he earned his third career win by knockout or technical knockout. Powell now owns three victories by KO/TKO, three by submission and three by decision. He also has three decision losses.

NEVER SAY NEVER AGAIN: Entering UFC on Fox 30, Alvarez had never lost a rematch, Stephens had never lost by TKO (42 fights) -- he was knocked unconscious by Yves Edwards -- and Aldo had never competed in a non-title fight in his UFC career (11 fights).

THE BEST THERE IS, THE BEST THERE WAS AND THE BEST THERE EVER WILL BE: Walking out to “Hitman,” the theme song for legendary professional wrestler and Calgary native Bret Hart, Cutelaba entered the Octagon in style while sporting Hart’s signature sunglasses. Both UFC events in Calgary have seen fighters use Hart’s theme song, with Antonio Carvalho being the first at UFC 149. Both Cutelaba and Carvalho prevailed in first-round knockouts.

SAIL ON: Herrera walked out to “Sail” (Awolnation) in its 18th recorded use. His first-round knockout loss while accompanied by the track dropped its winning percentage to among the lowest of any frequently used walkout song. With 18-plus uses, only three songs have fared worse for fighters: “Thunderstruck” (AC/DC), “Amazing” (Kanye West) and “Lose Yourself” (Eminem).